The global waste to energy market size was valued at USD 31.0 billion in 2019 and is projected to register a compound annual growth rate (CAGR) of 7.4% from 2020 to 2027. Favorable regulatory policies encouraging proper waste disposal combined with energy production along with growing energy demands from the end-use sector are projected to play a vital role in the market growth over the forecast period. Governments are focusing on commercializing alternate sources of energy such as Waste to Energy (WTE) technology owing to the rapid depletion of conventional energy sources. In addition, the implementation of environmental policies regarding the reduction of carbon emissions from fossil-fuel usage is expected to further provide a boost to industry growth. 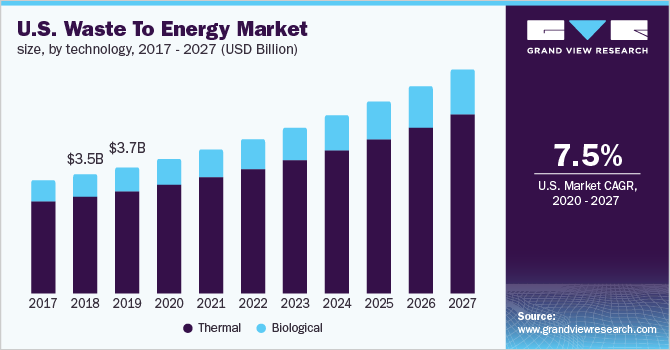 The U.S. WTE market is projected to witness substantial growth owing to rising industrial and domestic waste prompting the regional government to promote energy generation from waste. In addition, the presence of major market players such as Covanta Holding Corporation and Babcock and Wilcox Enterprises, Inc. across the region strengthens the deployment of WTE plants in the country.

According to the U.S. Environmental Protection Agency, greenhouse gas emissions witness a one-ton reduction for every ton of solid waste processed in waste to energy facilities. For instance, the U.S. based Covanta Holding Corporation utilizes its waste to energy facilities to recycle 500 kilotons of metal and convert approximately 21.0 million tons of waste into usable energy.

Waste to energy plants reduces a significant amount of harmful emissions owing to several factors including the recovery of metals for recycling, offset of carbon dioxide from fossil fuel power generation, and avoidance of methane from landfills. Moreover, limited space and rising landfilling prices are expected to further augment the waste to energy technology growth as a reliable waste management solution.

Technological advancements in energy recovery to improve the output efficiency of waste to energy plants are expected to bolster market growth over the forecast period. For instance, France based company Suez developed the CHP+® process in order to enable the residual heat recovery generated through waste combustion and simultaneously generate captive energy for use in local activities.

Rise in environmental concerns regarding increase in carbon emissions owing to usage of conventional fuels in industries, transportation, and for power generation purposes have led more countries to opt for cleaner and efficient sources of power generation and industrial activates. Furthermore, major countries such as the U.S., Canada, Germany, China, and India have given impetus to the use of clean and low-carbon-intensive energy technologies as a part of the long-term goals of respective countries.

Renewable power generation, waste to energy, and energy storage have emerged as some of the major alternatives to fossil fuels. This, in turn, has emerged as a viable solution for countries to meet their carbon reduction targets and switch to cleaner energy technologies. To enhance the adoption of these technologies, countries around the world are framing supporting policies and regulations.

The shrinking landfilling area is one of the key factors driving the growth of WTE market. Various industries have shifted their focus toward development of WTE in order to overcome the decreasing landfills. The U.S. has witnessed a decline in its number of landfills over the past few years and is expected to emerge as the largest waste generating country. However, decrease in the landfill capacity can lead to an increase in the tipping fees.

Another factor attributing to the increase in landfill dumping fee is the shifting trend of investing this revenue in monitoring industrial pollution and water quality management. While a few economies, such as the U.S., Australia, and the UK, have been allotting a portion of their financial budget toward these activities, they are shifting their focus toward other sources of revenue such as increase in the tipping fees.

Waste to energy enhances process efficiency across industries and can help increase the amount of energy generated by power plants. However, existing and newly built plants cannot opt for these systems due to their high costs, which increases the cost burden on end users with limited budget.

Waste to energy technologies are primarily designed to process one or a few types of waste such as plastic and biomass. Companies generally find it challenging to separate different types of waste or determine the exact composition of a waste source. Current challenges include the efficient pretreatment of waste before incineration. Most waste-to-energy technologies are characterized by either low-efficiency or longer schedules of sorting the waste input. Collection and processing of the accumulated waste is a major time-intensive process and it is expected to remain a challenge for the growth of the market over the coming years.

The thermal segment occupied the largest revenue share of 82.4% in 2019, with incineration thermal technology being a major contributor to revenue growth. A relatively simple process along with ease of operations is the growth factor for thermal conversion techniques. Thermal treatment of waste serves as an environmentally sound solution for modern cities by allowing complete combustion of gases released from the waste.

Incineration thermal technology provides several benefits such as limiting greenhouse gas emissions, preserving energy, and waste volume reduction. Waste is reduced to 10.0% of its original volume through incineration, serving as a viable alternative to conventional energy by creating renewable energy for applications such as district heating. In addition, recycling of bottom ash and metal further add to the lucrative benefits provided by this technology. 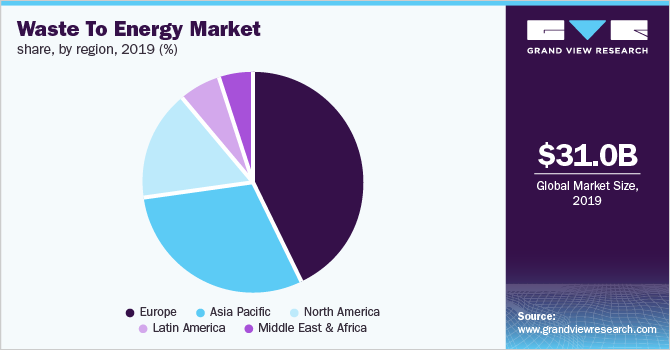 The biological segment is anticipated to attain the highest growth rate in the waste to energy market over the forecast period. This growth is owing to the gradual advancement of anaerobic decomposition technology. Governments across several developed nations are indulging in several R&D activities to enhance the economic viability of anaerobic digestion facilities. Genetic engineering of organisms and advancements in reactor design are among the key factors critical to the enhancement of biological conversion of gases to fuels and co-products.

The future growth of the biological segment can be attributed to environmental concerns and the growing demand for cleaner vehicle fuels such as biogas in the transport sector. In addition, anaerobic decomposition technique is projected to surpass the market share of biochemical composting techniques for biodegradable trash generated from municipal solid waste.

In Europe, the market accounted for the largest revenue share of 43.0% in 2019 owing to the presence of major market players such as Suez, Veolia, Ramboll Group A/S, and EQT AB. Favorable regulatory policies including landfill taxes, carbon tax, and direct subsidies to waste to energy plants are expected to further drive the regional market over the forecast period. 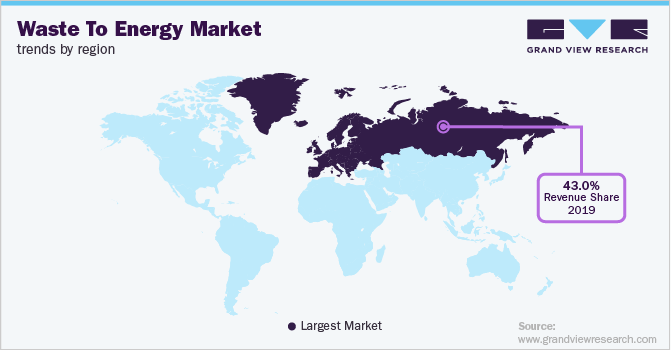 The rising population coupled with increasing demand for energy-efficient and clean energy is expected to propel the market for waste to the region's energy market. The European Union region has been very active in the R&D efforts related to clean and energy-efficient power generation sources. Availability of funding in the European Union for energy conservation and energy efficiency projects has been one of the major factors driving the regional market growth.

The UK commercial and industrial segments generated over 40 million tons of waste in 2016; the amount of waste treated in waste to energy plants is rather small compared to waste generated. With the ever-increasing threat of energy security, volatility in oil prices, and growing social pressure to reduce greenhouse gas emissions, the country has been focusing on developing a supportable and financially viable substitute to traditional fossil fuels.

North America occupied a prominent market share in 2019 owing to growing consumer awareness regarding environmental protection and climate change. Moreover, increasing government emphasis on integration and enhanced utilization of clean electricity generation sources is anticipated to increase the deployment rate of waste to energy plants across the region. According to Energy Information Administration, in 2018, 29.5 million tons of municipal solid waste was burnt in 68 U.S. waste to energy plants to generate around 14.0 billion kWh of electricity.

The U.S. has become an early adopter of clean energy solutions in the world in sectors such as power generation and manufacturing industries including chemicals, and others. This can be attributed to increased importance given to clean energy solutions as per the energy act introduced by the U.S. government. Moreover, based on such acts, relevant policies and regulations have been established to cater to different aspects of distinct sectors.

In Asia Pacific, the market for waste to energy is projected to experience the fastest CAGR over the forecast period with China and Japan offering the maximum potential for market growth. Increasing government funding for municipal solid waste management along with growing awareness regarding waste to energy plants across various economies such as India, Singapore, Indonesia, and Thailand are bound to drive the regional market growth.

India is experiencing rapid urbanization and development, thereby increasing MSW, which requires better waste management techniques. The government has undertaken various initiatives for managing urban and industrial waste as it has faced a large number of public health incidents associated with soil and water pollution. The country has installed 186 WTE projects to generate bioCNG and biogas power. Among 186 projects, five projects are MSW-based producing 66.5 MW of energy, and the rest 181 are industrial, urban, and agricultural-based waste to energy projects.

Industry players are focusing on research and development activities in order to reduce the technology cost associated with waste to energy power plants. Few companies are into vertical integration in order to strengthen the services. The companies are involved in the expansion of their facilities to increase their waste solution capabilities. Some of the prominent players in the waste to energy market include:

This report forecasts revenue growth at global, regional, and country levels and provides an analysis of the industry trends in each of the sub-segments from 2016 to 2027. For the purpose of this study, Grand View Research has segmented the global waste to energy market on the basis of technology and region. 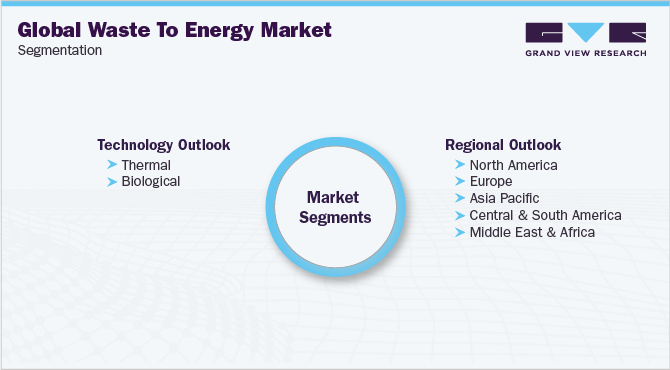 How big is the waste to energy market?

What is the waste to energy market growth?

Which segment accounted for the largest waste to energy market share?

b. Thermal segment occupied the largest market revenue share in 2019, with incineration thermal technology being a major contributor to the revenue growth. A relatively simple process along with ease of operations is the growth factor for thermal conversion techniques.

Who are the key players in waste to energy market?

What are the factors driving the waste to energy market?

b. Favorable regulatory policies encouraging proper waste disposal combined with energy production along with growing energy demands from the end-use sector are projected to play a vital role in the waste to energy market growth over the forecast period.