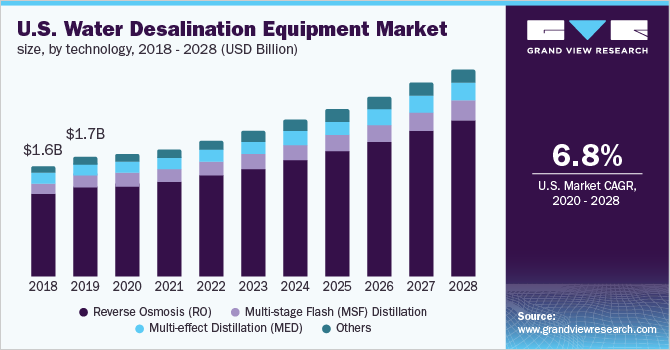 The U.S. passed a new Public-Private Partnership law to encourage domestic investments in the renovation and new construction of water purification plants and desalination facilities. In addition, increasing measures for providing a safe and reliable water supply to the people in the country amidst the COVID-19 outbreak have resulted in driving the demand for water treatment, especially desalination, in the country.

The natural desalination process, i.e., solar desalination evaporation (rains), is the primary source of fresh water on the earth. The scarcity of freshwater reserves, coupled with the rising demand for water in various arid regions as these areas lack sources of surface water, such as lakes and rivers, has resulted in augmenting the number of desalination plants globally.

Industrialization has strained water resources globally. The development of industrial-based processes requires a large amount of water for manufacturing and other functions. Increasing demand for water by industrial end users, such as oil and gas, paper and pulp, and food and beverage, is anticipated to further drive the demand for water desalination plants, thereby, augmenting the market growth.

The use of digital technology in desalination plants to manage operations and improve monitoring, process control, and risk detection is likely to supplement the market growth. Technological advancements in the desalination industry are aimed at achieving a variety of goals, including minimizing brine output and disposal and improving freshwater yield.

The seawater segment led the market and accounted for over 55.0% share of the global revenue in 2020. The increasing scarcity of potable water is projected to act as the major factor for boosting the demand for seawater desalination. The rising importance pertaining to the treatment of seawater to save freshwater resources is expected to stimulate the demand for seawater desalination equipment.

In the desalination process, seawater is pumped into the plant and pretreated, wherein the suspended solids and other particles are removed through filtration. Post this stage, water is transferred for removing the salinity through reverse osmosis or thermal distillation. Rapid population growth, coupled with the depletion in freshwater reserves, has resulted in augmenting the demand for water globally, thereby complementing the market growth.

Increasing pollution of surface water and groundwater reserves has resulted in driving the demand for clean drinking water. In addition, rising water scarcity in arid regions is driving clean water demand globally. The aforementioned factors are anticipated to positively impact the demand for desalination equipment in the municipal sector over the forecast period.

The industrial segment is likely to expand at the highest CAGR of 7.4% over the forecast period. Rapid industrial expansion in developing nations, such as China, India, Malaysia, and Thailand, is expected to contribute to the expanding industrial demand for water desalination technology. The pharmaceutical, food and beverage, paper and pulp, and manufacturing industries are predicted to develop as the world population expands, thereby complementing the market growth.

The growing investments in R&D operations in the desalination sector have resulted in the use of waste generated by power plants and refineries to power desalination facilities. The use of desalination plants using renewable energy, such as solar and wind, is expected to reduce total plant running costs and boost the market growth.

The reverse osmosis led the market and accounted for more than 55.0% share of the global revenue in 2020. This is attributed to its properties such as easy processing, low installation cost, the ability to treat different types of feed water, and minimal use of chemicals. The market growth is largely supported by the increasing need for desalination plants in water-scarce regions globally.

Reverse osmosis (RO) involves forcing saline water through a semipermeable membrane that filters salt molecules, eliminating salt from the water and generating clean water. The RO process consists of four phases, the first is pretreatment of feed water to make it suitable with the membranes by removing any suspended solids, adding threshold inhibitors, and modifying the pH value. 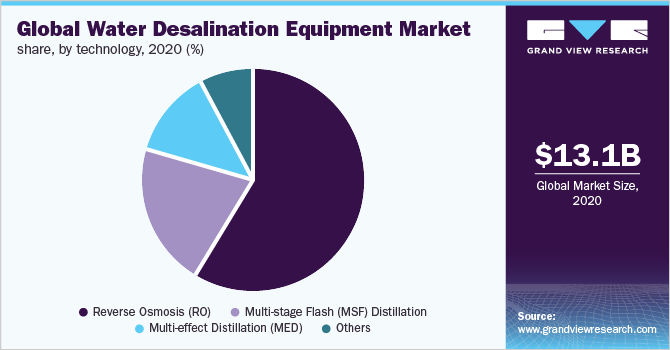 The Multi-stage Flash (MSF) distillation technology segment is likely to expand at a CAGR of 7.0% over the forecast period. High gain output ratio (GOR), flexibility to work with power generation plants, operation ease, and lower operating and maintenance costs are projected to boost technology acceptance in desalination applications, consequently driving the market.

Multi-effect distillation is a multi-effect process, wherein the feed water is evaporated and condensed multiple times at low pressure and temperature. The high efficiency of the process, coupled with the adoption of low-temperature energy sources for supplying feed to the system, is expected to drive technology penetration in the desalination market.

The Middle East and Africa led the market and accounted for over 40.0% share of the global revenue in 2020. The growing per-capita consumption of water in the region, along with the growing population due to the increased immigration, is anticipated to boost the demand for water desalination equipment over the forecast period.

The construction sector in the Middle East is expected to witness significant growth with strong government support for infrastructure development, rising investments to enhance logistical connectivity, and reconstruction efforts in conflict-hit areas. This, in turn, is anticipated to increase the water demand, thereby benefiting the market growth over the forecast period.

Asia Pacific is likely to expand at a CAGR of 7.8% over the forecast period. Depleting groundwater levels, especially in countries such as Bangladesh and India, are further expected to lower the water availability in the region, which, in turn, is anticipated to drive the demand for water desalination equipment in the coming years. In addition, the governments of China, India, and Australia have taken initiatives for the construction of desalination plants.

In China, factors including rapid industrialization and urbanization, coupled with the growing population, are expected to be the key drivers for the market in the country. In addition, rising water scarcity, especially in the northern part of the country, coupled with an increasing demand for irrigation for agriculture, has led to severe groundwater stress, thereby complementing the market growth.

The market consists of several major as well as regional players that are engaged in the designing, manufacturing, and commissioning of water desalination equipment. These companies offer end-to-end services, which include design, construction, start-up, plant operation, and maintenance of desalination facilities.

This report forecasts revenue growth at the global, regional, and country levels and provides an analysis of the latest industry trends and opportunities in each of the sub-segments from 2017 to 2028. For the purpose of this study, Grand View Research has segmented the global water desalination equipment market report on the basis of source, technology, application, and region:

Who are the key players in water desalination equipment market?

What are the factors driving the water desalination equipment market?

b. Key factors that are driving the water desalination equipment market growth include increasing water concerns, usages of aqua resources by rising population, and abundance of saltwater.

How big is the water desalination equipment market?

What is the water desalination equipment market growth?

b. The Middle East & Africa dominated the water desalination equipment market with a share of 43.8% in 2020. This is attributable to the scarcity of clean water resources, affordable equipment, and increasing investments in the region.