The global wearable patch market size was valued at USD 7.7 billion in 2019 and is expected to expand at a compound annual growth rate (CAGR) of 6.2% from 2020 to 2027. A wearable patch is known as an electronic skin or smart patch. They are used to monitor diseases, diagnosis, and drug delivery, and help in maintaining the health of elderly patients suffering from any chronic disease, such as diabetes. The market is expected to show lucrative growth, owing to growing R&D investment for the development of wearable patches. Wearable patch, such as transdermal patch and scopolamine patch, is directly attached to the affected body part for disease monitoring. For example, a nicotine patch is used in Nicotine Replacement Therapy (NRT), which releases nicotine into the body and helps prevent smoking. 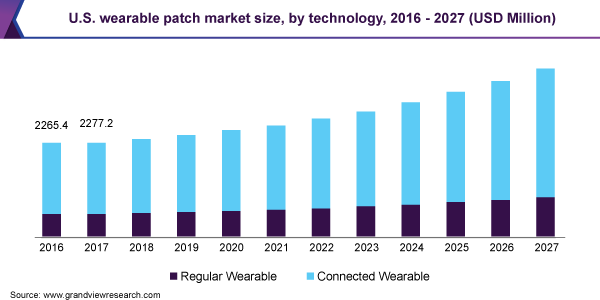 The major factor driving the market is the increasing incidence of chronic diseases such as atrial fibrillation and diabetes, which are causing stroke incidents at a higher rate, which is expected to drive the market over the projected period. For example, according to the International Diabetes Federation Report 2019, around 463.0 million adults were suffering from diabetes globally. In addition, it is estimated that around 700.0 million people will suffer from diabetes by 2045 worldwide.

Likewise, the increasing prevalence of atrial fibrillation is a major factor driving the market. According to the American Heart Association Report 2019, the leading cause of death in the U.S. was stroke, and around 2.7 million people in the country were suffering from atrial fibrillation. It is also estimated that annually, 800,000 cases of stroke are recorded owing to blockage in blood vessels.

Increasing technological advancement in wearable patches is also a major reason for the growth of the market. Wearable patches are used for diagnosis and monitoring of various chronic diseases such as atrial fibrillation. This, in turn, is increasing the demand for wearable patch and hence major players in the market are launching technologically advanced devices. For instance, in May 2020, Philips received approval for a disposable wearable sensor patch that can track the respiratory rate and heart rate once the patient is discharged from ICU. This device is basically known as Philips Biosensor BX100 and is approved by the U.S. FDA to be used in hospital settings.

Also, factors such as technological evolution, increasing prevalence of chronic diseases, and increased demand for the connected wearable patches are further anticipated to boost market growth over the forecast period. The growing usage of connectivity technologies such as microprocessor controller, Bluetooth, and myoelectric technology has resulted in the growing demand for such devices. Moreover, increasing demand for these advanced products in technologically advanced countries and increasing awareness are likely to drive the market over the forecast period.

The clinical segment accounted for the largest revenue share of 50.5% in 2019. Due to the rapidly increasing patient population and increasing investments in the R&D of the wearable patch, the segment is expected to show growth over the forecast period. 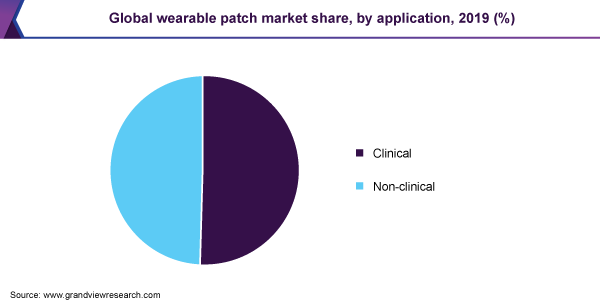 Growing investment in the clinical research industry by various players in the market to boost their efficiency and productivity has driven the manufacturers to increase their focus on these activities. Increasing focus on the wearable patch and growing R&D spending are major factors responsible for the growth of this segment.

North America dominated the wearable patch market and accounted for the largest revenue share of 35.5% in 2019. The market is anticipated to grow at a substantial rate in the region over the forecast period. This growth can be attributed to a rapid increase in the development of the wearable device to meet the growing demand for efficient healthcare in the region, and strong R&D and promotion of new therapies. In addition, North America being the top manufacturing hub for highly reliable, complex, and high-end wearable medical devices, is expected to drive the market in the region.

Moreover, various medical device manufacturing companies are focusing on the market due to the booming healthcare industry in the region. Increasing investments in the technological advancement of wearable medical devices and rising R&D spending are factors contributing to the growth of the market in this region.

Key companies are also engaging in partnerships, mergers, and acquisitions to strengthen their product portfolio, manufacturing capacities, and to provide competitive differentiation. Some of the prominent players in the wearable patch market include:

This report forecasts revenue growth at global, regional, and country levels and provides an analysis of the latest industry trends in each of the sub-segments from 2016 to 2027. For the purpose of this study, Grand View Research has segmented the global wearable patch market report on the basis of technology, application, and region:

How big is the wearable patch market?

What is the wearable patch market growth?

Which segment accounted for the largest wearable patch market share?

b. North America dominated the wearable patch market with a share of 36% in 2019. This is attributable to rising healthcare awareness coupled with cloud-based technologies acceptance and constant research and development initiatives.

Who are the key players in the wearable patch market?

What are the factors driving the wearable patch market?

b. Key factors driving the wearable patch market growth include the rising prevalence of the chronic disease, increasing awareness regarding wearable patches, and a growing aging population with atrial fibrillation.