The global webcams market size was valued at USD 5.18 billion in 2017 and is expected to exhibit a CAGR of 8.6% from 2018 to 2025. Surging demand for surveillance systems and increasing adoption of unmanned aerial vehicles (UAVs) and automated guided vehicles (AGVs) in commercial spaces are expected to significantly drive the market. 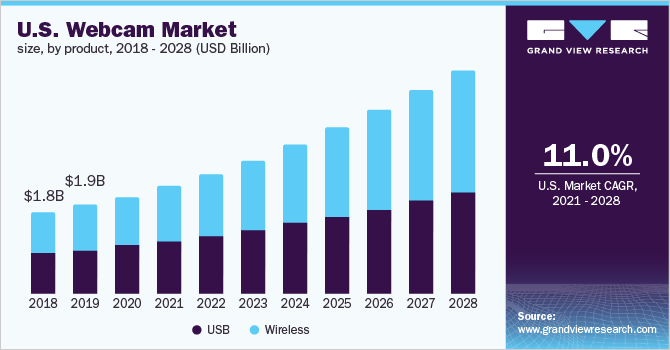 The industry has been gaining prominence owing to increasing adoption of web cameras in security and surveillance, video conference, entertainment, live events, and visual marketing, among others. These popular, real-time monitoring devices are used for recording on-going events. Multiple cameras installed at different angles continuously record indoor and outdoor events. The received data can be viewed and shared using Bluetooth or via the internet.

Growing need for security and surveillance due to increasing terrorist activities and local crimes is a significant growth driver. The 9/11 attacks in U.S. prompted the need for surveillance and tracking real-time movement at and around areas under supervision. The technology is also widely used for surveillance purposes in personal and professional spaces. Use of security cameras has enhanced the effectiveness of policing, globally.These enable additional monitoring of documents and record surrounding happenings.

A security webcam deployed outside a commercial space offers warning notifications against burglars, trespassers, miscreants, and others. These cameras are also widely used by individuals to communicate with friends and family at any point of time irrespective of location. Live video streaming demands both parties to have webcams and video chat programs installed on their personal computers, in addition to internet connectivity. However, fluctuations in internet speed act as deterrents to market growth.

Internet speed directly influences the quality of images and videos recorded and streamed. A minimum internet speed of 128 Mbps is required to avoid video distortion. Deployment of webcams is anticipated to witness sluggish growth in remote locations and regions with poor internet connectivity.

The market has been bifurcated into USB and wireless cameras. The USB segment is anticipated to account for nearly 55.0% of the overall revenue by 2025. USB cameras are connected to laptops or desktops via cords, cables, or wires or are clipped onto monitors. Software applications are platforms that enable users to view as well as transfer images from webcams to other devices.

Wireless cameras can be connected to desktops using Wi-Fi or Ethernet and do not necessitate a cable. Owing to growing proliferation of internet worldwide, wireless web cameras are expected to witness faster deployment over the forecast period. However, complex functioning and fluctuation in speed may act as deterrents to segment growth owing to ill-effects of poor connectivity on quality of images and videos.

Based on technology, the global webcam market has been categorized into analog and digital. In 2017, the analog segment was valued at USD 3.22 billion and is estimated to account for more than 60.0% of the overall volume by 2025. Analog and digital tracking cameras vary based on type of image sensors used to convert light signals into digital signals.

Analog cameras are equipped with Charged Coupled Devices (CCDs), which are analog optical chips deployed for converting light into electrical signals. These processed electrical signals are then transferred to another chip where the signals are digitized, and subsequently the data is stored in a memory chip inside the web cameras. The maximum resolution limit of these cameras is 640×480 pixels; however, the quality of images and videos is poor as compared to digital webcams. Processing of images in analog web cameras involves the use of two or more optical chips.

On the contrary, digital cameras are deployed with Complementary Metal-Oxide-Semiconductors (CMOS), which directly convert light (in the form of images and videos) into digital signals to accumulate recorded information. The process takes place inside a single chip, making digital webcams cheaper compared to analog ones. Digital cameras feature a viewing angle of 100+ degrees and offer high-resolution videos. This segment is anticipated to witness significant growth in terms of revenue as well as volume from 2018 to 2025 owing to the above attributes.

Over the last five years, e-commerce portals have opened up a new avenue for sale of electronic products, including webcams. This is attributed to growing smartphone proliferation, coupled with ease of internet access in most parts of the world, which has resulted in online shopping emerging as a convenient mode of purchasing goods. Availability of a wide range of products from different brands with attractive discounts is one of the benefits offered by e-commerce players.

Although e-commerce is witnessing popularity, a large number of consumers still prefer brick and mortar stores as they enable users to personally examine and inspect the available options before making the final purchase. The brick and mortar segment accounted for a larger revenue share in 2017 but is anticipated to face stiff competition from e-commerce players over the forecast period.

Based on end use, the global market has been categorized into security and surveillance, entertainment, video conference, live events, visual marketing, and others. The others segment includes online education, tourism, and retail shopping centers. The live events segment accounted for the largest revenue share of almost 27.0% in 2017 and is anticipated to continue its lead over the forecast period. Need to deploy webcams for recording live events, shows, and concerts from different angles is anticipated to propel their usage at such events. 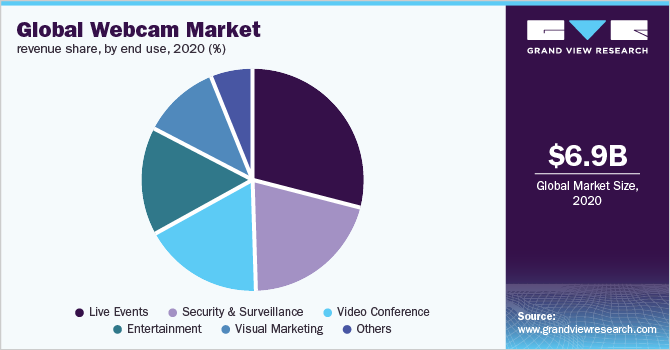 The security and surveillance segment is expected to expand at the highest CAGR of over 9.0% over the forecast period. Need to monitor and track real-time movements occurring in households or commercial spaces is expected to drive the segment. Furthermore, the number of monitoring cameras deployed for security purposes to avoid crimes and other suspicious activities is anticipated to increase over the forecast period.

Webcams are also being widely used for marketing purposes in the travel and tourism and recreation sectors, as currently, users prefer comparing pictures and videos of destinations to make pre-informed decisions. Images and videos recorded by these cameras are uploaded on a company’s website to engage a significant number of customers and boosting web traffic.

In 2017, North America accounted for the largest revenue share of close to 40.0% in the global market, and the region is expected to continue dominating the market over the forecast period. High adoption of webcams in North America can be attributed to increasing need for security and surveillance at homes and commercial areas. Web cameras are being widely used in the region for recording on-going events, security and surveillance, visual marketing, and online education.

Asia Pacific is expected to witness an increase in demand for webcams and exhibit an anticipated CAGR of 9.6% over the forecast period. China is expected to account for the largest volume and revenue share through 2025. Availability of cost-effective web cameras offered by local Chinese players with features similar to well-established brands is anticipated to contribute to the country’s growth. Furthermore, growing adoption of technological innovations from China by countries such as U.S. and Canada is expected to drive the market.

Well-established players are dominating the global market with a large customer base worldwide. Furthermore, such companies are making massive investments in marketing campaigns to increase their brand visibility. Major players are focusing on constantly upgrading technologies used in webcams to gain a competitive edge over other industry participants.

This report forecasts revenue growth at global, regional, and country levels and provides an analysis of latest industry trends in each of the sub-segments from 2014 to 2025. For the purpose of this study, Grand View Research has segmented the global webcam market report based on product, technology, distribution channel, end use, and region: