The global whiskey market size was valued at USD 57.96 billion in 2018 and is projected to register a CAGR of 6.4% over the forecast period. This growth is driven by various factors, such as increasing disposable income levels and changing lifestyles and consumer preferences. The millennial generation with its considerable purchasing power is the key consumer for the market. The product is manufactured using farm-grown grains by distillers, with a blend of whole spices, herbs, and grains to improve their taste and flavor. The global industry is majorly concentrated in North America and Europe owing to the high consumer demand in the U.S., U.K., and France.

The demand for blended whiskey is likely to witness strong growth on account of increasing consumer base across the globe. The demand for super-premium drinks is likely to witness substantial growth in developed countries, such as U.K., France, the U.S., and Canada, over the next few years. Factors responsible for this growth include “innovation and premiumization”, modernized alcohol laws expanding consumer access and choice, hospitality tax restraints, growth of “cocktail culture”, and a focus on “craft” products throughout developed regions. 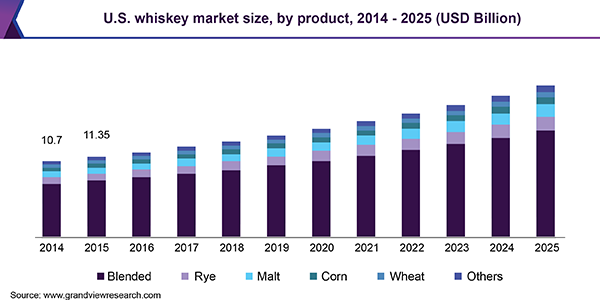 The market is majorly concentrated in Europe owing to the sizeable demand for premium products in U.K., France, and Spain. North America is projected to remain the second-largest market. Economically developing countries in Asia Pacific, Central & South America, and MEA are also likely to attain traction in the years to come. The growth of the market is affected by government regulations and taxation policies. Whiskey is an alcoholic beverage and it needs to follow various government regulations, which is acting as a primary hurdle in the industry growth.

For instance, the U.S. market is regulated by various national and state authorities. The companies in the industry need to follow the regulations related to the production, sale, and distribution of alcohol within national borders. Thus, several local and federal laws are hampering the global market growth. However, markets in the emerging countries including India, Brazil, and China are not completely explored and thus, offer huge growth opportunities for industry players. Increasing consumer awareness in these economies is estimated to bolster the demand further.

On the basis of product, the market is categorized into malt, rye, wheat, blended, and corn whiskeys. Wheat-based product is mostly manufactured in the U.S. and is produced by using at least 51% of the wheat. The product is saporous and has a lightness and gentle sweetness to it. Depending on the number of secondary grains, the spice factor in the wheat product is relatively low. Some of the widely known wheat whiskeys are Bernheim Original Wheat, A.D. Laws Triticum Straight Wheat Whiskey, Dry Fly Straight Washington Wheat Whiskey, and OYO whiskey.

This segment is anticipated to exhibit a substantial growth owing to high product demand. Extensive use of wheat whiskey in cocktails will drive the segment further. The demand for malt whiskey is likely to witness significant growth, especially in China, Taiwan, and South Korea. The consumption of the said product is likely to be fueled by the exclusivity of whiskey festivals and clubs, along with the growing visibility in the specific type of on-trade venues. Also, the rising demand for single-malt scotch in Asia Pacific is projected to boost the market.

High-end premium, premium, and super-premium are the major quality parameters in the global market. Scotch, bourbon, and single-malt whiskeys are considered premium quality products. Scotch whiskey, usually distilled in Scotland, Canada, and Japan, must be distilled to <94.8% alcohol by volume, aged at least three years, and one day in oak casks of <700 L size. Within the wide Scotch category, there are five classifications including single-malt, single grain, blended malt, blended grain, and blended scotch.

The premium products segment is anticipated to witness substantial growth over the forecast period on account of increasing demand for conventional drinks. Growing club- and the pub-visiting population is also expected to accelerate this demand. Moreover, the preference for alcoholic beverages with genuine flavors and strong tastes has also augmented the demand for premium drinks. 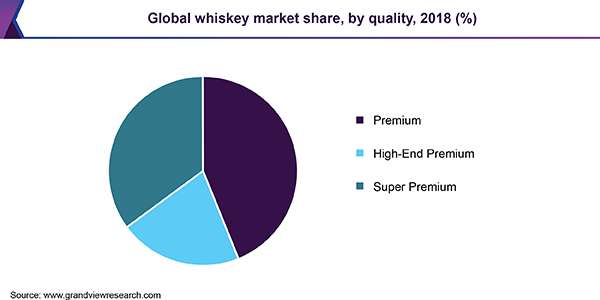 High-end premium counterparts are likely to witness growth over the forecast period due to industry consolidation and high-entry-barrier of new companies. However, a small customer-base and high prices of high-end premium quality products are likely to hinder the segment growth. Nevertheless, numerous international companies, such as The Macallan, Glenfiddich, and Johnnie Walker, are investing in the high-end premium distillation of the product, which will support the market growth.

The number of premium product manufacturers in North America has increased at a sharp rate over the past few years. Escalating product demand has attracted several new companies in the market. Furthermore, reduced timelines for approval from the federal and state regulatory control have motivated distilleries to start producing whiskey. As a result, the number of large distilleries in the region is likely to increase remarkably over the next few years. Key states in the U.S. with a significant number of craft distillers include Kentucky, Tennessee, Pennsylvania, New York, Texas, California, Arkansas, Michigan, Kansas, North Carolina, West Virginia, and Vermont.

The distilleries are regulated by the American Distilling Institute, Alcohol and Tobacco Tax and Trade Bureau, and American Craft Spirits Association. Consumers who have recently reached the Legal Drinking Age (LDA) play a key role in driving the industry in North America. In addition to the U.S., Canada and Mexico are other major economies in the region’s blended product segment. Europe was the leading regional market in 2018 and accounted for a volume share of 34.8%. The regional market is mainly driven by rising demand from Germany, Belgium, U.K., France, Spain, and Poland. However, it is likely to have a relatively slower growth as compared to developing regions due to rising geriatric population in Western Europe.

Key strategies implemented by the major manufacturers include portfolio expansion, joint ventures, capacity increase, mergers & acquisitions, and brand promotion. These companies are focusing on including exclusive products in their portfolios to improve their customer base and use locally-grown grains and spices to impart a distinct taste and flavor.

This report forecasts revenue and volume growth at global, regional, and country levels and provides an analysis of the latest industry trends in each of the sub-segments from 2014 to 2025. For the purpose of this study, Grand View Research has segmented the global whiskey market report on the basis of product, quality, and region: