The global white spirits market size was valued at USD 51.5 billion in 2018. Increasing urbanization in emerging countries such as China and India as well as new product launches in the category are the key driving factors in the market. Moreover, rising social acceptance of alcohol consumption has spurred the consumption of spirits in a social environment. 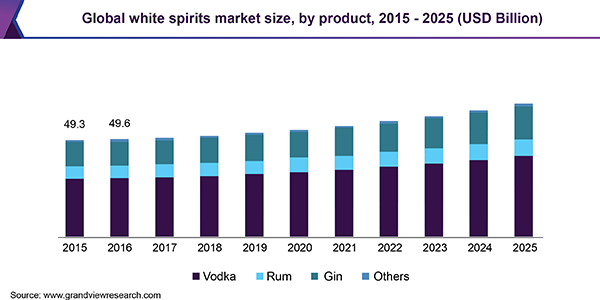 Consumer inclination towards premiumization has facilitated producers with increased margins and growth in revenue. The shift towards premium products is supported by the increasing popularity of cocktail culture besides effective marketing efforts by companies.

Shifting preference for white spirit alcohol on account of varietal flavors as well as ingredients is prominent among the millennials. For instance, in 2017, 32% of millennials consumed spirit in the U.S. Moreover, the millennial population is expected to drive online sales in the coming years as they are more digital-oriented. In the offline stores, retailers engage in in-store promotions to influence millennials in the retail environment.

Prominent players focus on innovative ingredients. For instance, in April 2019, Bacardi Limited launched lime-flavored rum in its product portfolio with intense flavor and aroma of lime and natural citrus. In April 2019, Quintessential Brands Group introduced a blueberry variant under the brand Greenall’s Gin.

Rapid urbanization, growing population, and rising per capita income of the consumers are the key factors driving the market in the Asia Pacific. North America and Europe emerged as the major regional markets due to the shift in consumer preferences from beer and ciders to spirits. High consumption of alcohol in countries is expected to boost market growth in the Middle East and Africa.

Vodka was the largest product segment that accounted for 60.4% share in 2018. The rise in consumption of vodka in countries such as the U.S. and Russia has fueled the market growth for domestic premium vodkas, especially among millennials and the female population. Moreover, the product is touted as a stress buster and hair and skin enhancer. It also reduces hypertension and aids in digestion.

Gin is projected to expand at a CAGR of 3.7% from 2019 to 2025. Big brand launches by established companies in the white spirits market have added to the available options for consumers of gin. In September 2017, Diageo Brands B.V. launched its brand Gordon’s Premium Pink Gin. In February 2018, Beefeater London launched Beefeater Pink, which is a strawberry based gin; Charles Tanqueray & Co. launched Tanqueray’s Flor de Sevilla, an orange essence drink, and Lovage gin in April and May 2018 respectively.

The on-trade distribution channel generated a revenue of USD 26.6 billion in 2018 and is expected to witness significant growth owing to increasing sales of vodka and gin, which is attributed to surging consumption of cocktails. The growth is due to rising per capita income of consumers and the adoption of luxury lifestyle and premium spirits in countries, including the U.S., the U.K., and Germany. 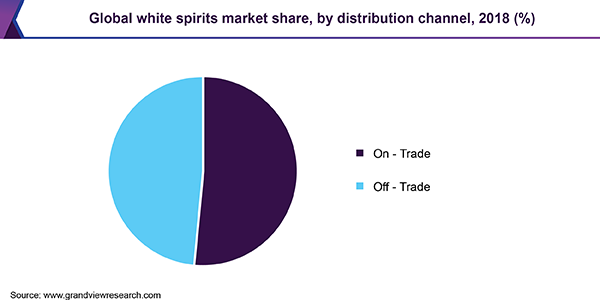 Off-trade distribution is projected to foresee growth at a CAGR of 3.5% from 2019 to 2025 owing to the growing trend of at home-drinking. Consumption, particularly by generation X and Y, is expected to play a significant role to boost the off-trade segment growth in the coming years.

The Asia Pacific is the largest regional market that accounted for 28.8% share in 2018. Population growth, urbanization, and rising disposable income in countries such as China, India, and Thailand are anticipated to play an important role in increasing the regional industry size in the coming years.

The Middle East and Africa are expected to witness revenue growth at a CAGR of 3.4% from 2019 to 2025. High consumption of alcohol in countries of the region is expected to open new avenues for alcoholic products in the future.

Some of the key companies are Diageo plc; Rémy Cointreau; Bacardi Limited; Pernod Ricard; The Brown - Forman; Beam Suntory, Inc.; Radico Khaitan; Stock Spirits Group; Hite Jinro Co Ltd; and Constellation Brands Inc. Leading players in the market are focusing on product innovation as a result of which new product development have gained prominence. For instance, in April 2019, Pusser's Rum Ltd. added a pre-mix rum brand as a painkiller cocktail. Similarly, Conecuh Brands, in partnership with U.K.-based singer Rita Ora, is expected to launch a new tequila brand in the market of U.S.

Mergers and acquisitions are also prominent in the market. For instance, in January 2018, Pernod Ricard completed the acquisition of the remaining stake in Avión Spirits LLC, owner of the ultra-premium tequila brand Avión, from its joint-venture partner Tequila Avión. Similarly, in June 2017, Diageo entered into a definitive agreement to buy Casamigos, the tequila company co-founded by George Clooney. In April 2018, Pernod Ricard acquired the stake in Avion Spirits LLC, while, Diageo has agreed with Casamigos, a tequila company to buy the company for USD 1 billion in June 2017.

This report forecasts revenue growth at the global, regional, and country levels and provides an analysis of the latest industry trends and opportunities in each of the sub-segments from 2015 to 2025. For this study, Grand View Research has segmented the global white spirits market report based on the product, distribution channel, and region:

How big is the white spirits market?

What is the white spirits market growth?

Which segment accounted for the largest white spirits market share?

b. Vodka dominated the global white spirits market with a share of 60.5% in 2019. This is attributed to the rise in consumption of vodka in countries such as the U.S. and Russia, especially among the millennial and female population.

Who are the key players in white spirits market?

What are the factors driving the white spirits market?

b. Key factors that are driving the market growth include new product launches in the category, shifting consumers' inclination towards premiumization and increasing popularity of cocktail culture among consumers.