The global wound irrigation systems market size was valued at USD 265.12 million in 2018 and is expected to expand at a CAGR of 3.6% over the forecast period. The demand for wound irrigation system is on the rise owing to the technological advancements, increasing prevalence of chronic diseases, and rising number of surgical procedures.

Rising prevalence of chronic and acute wounds and introduction of advanced products are the major factors anticipated to drive the market. For instance, in February 2017, Centurion Medical Products launched wound irrigation system IRIG-8 for acute wound management in emergency room. This system rapidly delivers irrigation solution in high-volumes to the acute wounds with constant pressure. Such technological advancements are anticipated to propel the market growth. 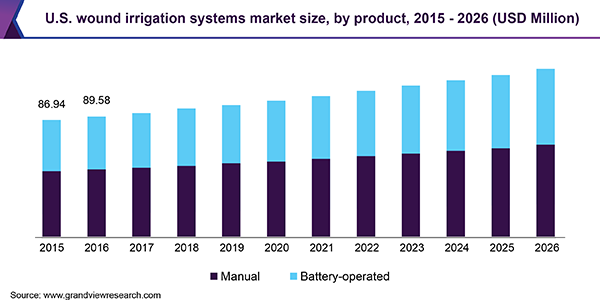 High prevalence of diabetic foot ulcers is also anticipated to drive the demand for wound irrigation systems. For instance, as per the article published by the Cochrane UK, in 2017, venous leg ulcer was the most common type of leg ulcer in U.K. and around 1.0% of the population. It also stated that around 3.0% of the people aged 80 years and above suffered from venous leg ulcers. Such factors are anticipated to positively impact the market over the forecast period.

The rising cases of injuries caused by traumatic events and road accidents is also one of the major factors driving the market growth. For instance, as per the American Association for the Surgery of Trauma, in 2017, around 1.2 million people died from road accidents across the globe, which is around 3,242 people per day. Such cases are expected to surge the demand for rapid wound healing products in the forthcoming years.

Global increase in incidence of chronic diseases, such as diabetes, cancer, and other autoimmune diseases is anticipated to drive the market growth. Factors such as antimicrobial resistance, adoption of unhealthy and sedentary lifestyles, alcohol consumption, and smoking contribute to the rise in prevalence of non-communicable diseases. According to the National Diabetes Statistic Report 2017, published by the Centers for Disease Control and Prevention (CDC), more than 100.0 million people in U.S. were living with diabetes or prediabetes conditions. In addition, the WHO reported that in 2016 approximately 1.6 million deaths across the globe were directly caused by diabetes. Therefore, such factors are expected to surge the demand wound irrigation systems.

Manual segment held the largest share of the wound irrigation systems market in 2018. The manual system have thumb-controlled pressure to provide accurate forceful stream of solution directly to the desired site. This system is majorly used for deep surgical and hard-to-heal wounds. Therefore, increasing cases of surgical site infection and diabetic foot ulcers are anticipated to drive the segment growth over the forecast period.

The battery-operated product segment is anticipated to witness the fastest CAGR over the forecast period. These systems allow rapid and efficient removal of necrotic tissue, foreign material, and bacteria. They are easy-to-use and reduce the risk of acquiring cross-contamination. The battery-operated wound irrigation system is majorly used for burn cases and chronic wounds.

The chronic wounds segment dominated the market in 2018. According to the U.S. National Institutes of Health (NIH), more than 6.5 million people suffered from chronic wounds in U.S. in 2017. It also reported that around 1.0% to 2.0% of the total population of developed countries is likely to suffer from some kind of chronic wounds during their lifetime. The segment is anticipated to witness the fastest CAGR over the forecast period. The increasing cases of chronic diseases, especially diabetes is one of the major driving factors for the growth. 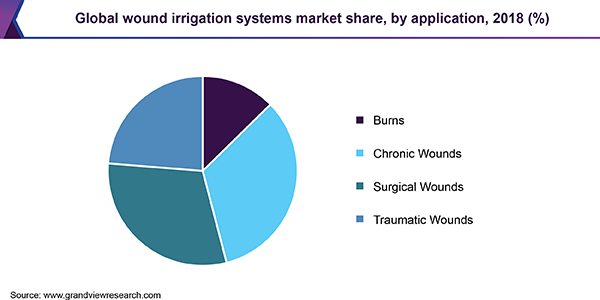 For instance, as per the report published by the WHO in 2019, chronic diseases are one of the leading causes of disability and deaths globally and the disease rate from the chronic conditions is also accelerating worldwide. Furthermore, as per the report published by the Fight Chronic Disease Organization in 2018, in U.S., around 47.7% people suffered from chronic conditions in 2015 and around 49.2% are likely to suffer from chronic conditions by 2030. Therefore, such instances are expected to drive the segment growth over the forecast period.

North America dominated the market in 2018. Increasing cases of burns, rising prevalence of chronic diseases, and presence of several key players is anticipated to drive the regional market. In addition, the availability of skilled professionals and developed healthcare infrastructure are also expected to drive the regional demand for wound irrigation systems.

Asia Pacific is anticipated to witness the fastest growth over the forecast period. Presence of developing countries, such as China, India, and Japan is anticipated to boost the growth. In addition, increasing prevalence of chronic wounds, especially diabetes is also expected to surge the regional market growth. According to the National Center for Biotechnology Information (NCBI), around 1.77% of inpatients in China suffered from non-healing chronic ulcers in 2018.

Prominent players operating in the market include Zimmer Biomet, Stryker Corporation, Centurion Medical Products, BSN Medical, and Bionix. Most key players are adopting various strategies, such as mergers and acquisitions, product launches, and partnerships to strengthen their foothold in the market.

This report forecasts revenue growth at global, regional, and country levels and provides an analysis of the latest industry trends and opportunities in each of the sub-segments from 2015 to 2026. For the purpose of this study, Grand View Research has segmented the global wound irrigation systems market report on the basis of product, application, and region: