Ready-mix concrete (RMC) market is extensively used for the construction of various infrastructure development applications which include residential and commercial buildings, airports, runways, ports, energy generation facilities, production plants, and roads. Significant growth in the construction sector and cement output is anticipated to augment industry growth over the upcoming years. Moreover, rapid growth in social infrastructure, government accommodation and defense infrastructure will promote industry expansion over the next few years. 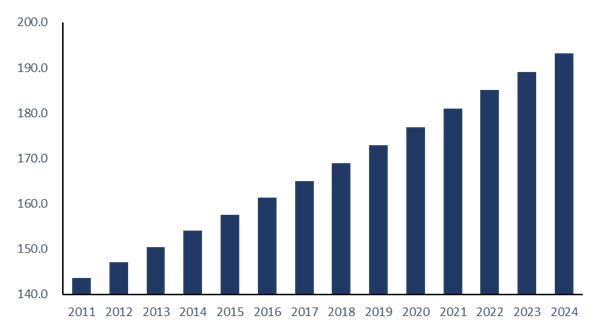 The demand for commercial buildings such as offices, schools, colleges, hospitals and shopping malls is increasing owing to rapid economic development and modernization is expected to fuel market demand over the upcoming years. Moreover, development of new greenfield airports, metro railway stations, stadiums and national highways will further drive the usage of ready-mix concrete in the future. However, developed infrastructure in countries such as Germany and the U.S. is expected to restrict the usage of RMC and serve as the major challenge for manufacturers over the forecast period.

Asia Pacific was the dominant market and is projected to witness significant growth over the forecast period on account of growing infrastructure development projects in China, India, Singapore, and Thailand. Increasing road construction activities coupled with rising demand for airports and seaports in the region is expected to drive the growth of the ready-mix concrete market over the projected period. Rapid industrialization in Southeast Asia in light of increasing government spending along with public-private partnership projects will stimulate construction industry growth which in turn will drive market expansion over the forecast period. Also, favorable political and economic scenario in India along with “Make in India” initiative has encouraged aircraft and automotive manufacturers for setting up manufacturing facilities and offices in the country, which will open new market opportunities over the forecast period.