Collaborative robots or cobots are the one of a kind robots programmed to work less autonomously. They are so designed to assist human beings as a guide by interacting physically in a particularly shared workplace. The intense R&D in the robotic technology by various robot manufacturers and related promotional organizations has led to the evolution of a new robotic technology of collaborative robots.

Collaborative robots have enhanced the safety issues in the working environment, lowering the human interaction leading to a lesser amount of workplace mishaps and hence, considered to be the significant factor driving the overall market across the industrial sector. In addition, the adoption of cobots has led to the opening of various opportunities for the industries, OEMs, small and medium sized start-ups, and ventures owing to the features such as effective automation, faster production, and reduced errors occurring due to the human interaction. 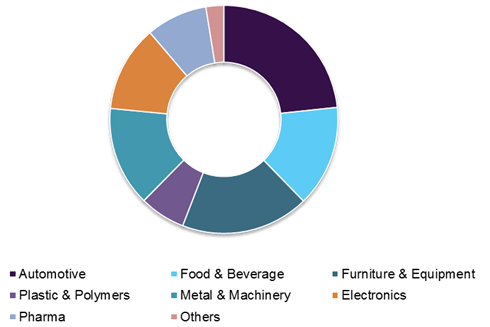 Another factor contributing to the heavy adoption of cobots is increasing automation across the automotive sector. Increasing application in various industries such as automotive, furniture & equipment, metal & machinery, food & beverage, and pharmaceutical is expected to significantly drive the collaborative robots market over the estimated period.

Further, the major applications of the collaborative robots include assembling, handling, picking & dropping, packaging, and gluing and welding. Handling application segment is projected to hold the maximum market share in 2015 and is expected to maintain the dominance over forecast period. However, assembling and packaging segments are expected to witness the enormous growth with the fastest CAGR, from 2016 to 2025.

The rapid growth of these segments can be attributed to the growth being witnessed by the automotive and food & packaging sectors. The demand for the collaborative robots for performing various tasks across the industries is anticipated to be a remarkable factor for driving the global market.

The presence of key industry players such as KUKA AG, ABB Group, Fanuc Corporation, and Universal Robots A/S in the North American and European regions have led to the intense R&D in the robotic technologies and contributed to the strong demand for the collaborative robots, especially in the industrial sector worldwide.

Key industry trends include the growth in the adoption of the cobots having above 10 kg payload capacities owing to the heavy handling, pick and drop, and assembling tasks in the automotive sector. Europe being a prominent industrial hub, particularly automobile sector, constitutes for the maximum market for the cobots. Although, the Asia Pacific region is expected to undergo a significant swift over the estimated period on account of increasing variety of manufacturing practices being carried out across the continent.

However, the key players from the North America and European countries are involved in the rigorous R&D activities for maintaining the dominance in the market. The continuous developments are leading to the enriched portfolios and enhancing the supply in the Asia Pacific region. Therefore, additional investments and the considerable demands arising are expected to keep paving a smoother way for the overall collaborative robots.