The escalating investments in industrial and infrastructural developments in the Asia Pacific and North American regions are expected to fuel the distribution automation systems demand over the forecast period. The mounting electricity demand has led to the development and enlargement of power infrastructures, which necessitates the installation of these systems.

The growing demand for alternative energy and rising cost of generating electricity have led to the transformation of conventional electric grid to smart grid. Smart grid or automation allows the modernization and easy adaptability of existing power grids to future energy demand. Automation significantly helps power operators to manage energy and react quickly to the changing demands, subsequently boosting the network efficiency.

The graph above suggests that the industrial segment accounted for a significant share in 2015. The emergence of smart cities is expected to benefit substation automation over the forecast period. There is a rising need for developing countries, such as India, to address sustainability and network issues of outage response, which would help them reduce the cost per kilowatt-hour. Smart grids can prove to be an efficient way of bringing transformative operations. Hence, as countries are increasingly choosing to upgrade their infrastructure for the smart city initiative, the demand for automation systems is expected to increase. 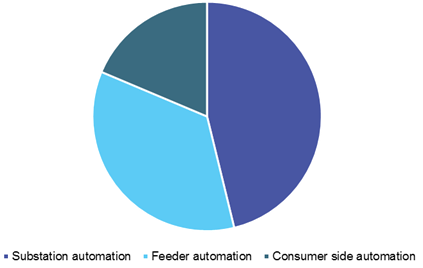 The rise in manufacturing and other industrial activities in Asia Pacific is expected to catapult the demand for electric power distribution automation systems over the forecast period. The countries in Asia Pacific, particularly China, are projected to witness a significant growth in the near future owing to the espousal of automation across industrial, commercial, and residential applications.

With the escalating need of utilities to automate manufacturing operations and enhance grid efficiency, the market is expected to witness a substantial growth over the forecast period. However, rising security concerns and lack of global standards are anticipated to hamper the market growth.

The rising electricity demand in Asia Pacific is projected to offer several avenues for the adoption of automated solutions across the utilities. Several factors, such as growing reliability and efficiency of distribution systems, abridged outage durations, and cost & maintenance reduction coupled with the enhanced power quality are expected to drive the global distribution automation market.