Quantum Dot is a phenomenon that many of us might be seeing in real life in some of the most common applications, but not be actually aware of its meaning. So what is it, and how has it positioned itself in electronics and medical sectors around the globe?

Ever wondered what made LCD screen colors in laptops, tablets, phones, e-readers, and televisions so vivacious? Would you believe if you were told that these colors were being emitted by tiny dots, called quantum dots? Quantum dots first burst onto the technology scene in 2015, and the appeal, especially in the consumer electronics industry, has only grown since. One of the most common uses of Quantum Dot displays is in television sets, where it is referred to as QLED. It can be thought of as a direct competitor for OLED TVs, where it holds many advantages over the latter. Quantum dots also find application in other areas such as biology and healthcare. They can be expected to replace single crystal semiconductors that are currently used in camera sensors, solar panels and medical imaging tools.

What Exactly are Quantum Dots?

Quantum dots (QDs) are nanocrystals or tiny particles of a semiconducting material. They are roughly one ten-thousandth the width of a human hair, thus justifying their name. When supplied with energy, these quantum dots start glowing. The color of the quantum dot is determined by its size; so, a smaller one may glow blue, while a larger one may glow red or orange. Quantum Dot Display is simply a display device using QD with semiconductor nanocrystals that results in the production of monochromatic red, blue and green light. Quantum dot displays can replicate up to 93% of the colors that are visible in the natural world and are highly energy efficient.

QDs, when exposed to suitable light, turn luminous, generating very pure color. Quantum dot display brightness is 10 to 20 times more than organic dyes. When grouped together in designated sizes, and combined with a blue LED light source, they transmit light across the whole bandwidth which is required for optimal TV viewing. As the semiconductor material shrivels to quantum-dot level, the ‘light wavelength’ material changes from insulator to conductor.

Quantum Dot displays are used in biological imaging, renewable energy, optoelectronics, security, surveillance, and quantum optics. In biological imaging, they are used for in-vitro and in-vivo imaging to detect cancer cells. Across optoelectronics, they are used in LEDs for more vivid color ranges. Quantum particles cells are anticipated to be a renewable source of energy in the future.

As opposed to conventional LCDs, quantum dot displays offer much improved color accuracy. Using this technology, LCDs can offer stiff competition to OLED devices, as they offer comparable color range to the latter. Also, when viewed under direct light or sunlight, Quantum Dot displays offer much more brightness than OLED ones, which is a major advantage. QD LED display devices are incorporated in ultra-flat LCD (liquid crystal display) panels.

Quantum Dot display technology is one of the most exciting technologies around. It is no wonder then, that the market is expected to grow significantly in the coming years. Some of the factors aiding in the quantum dot display market growth are: 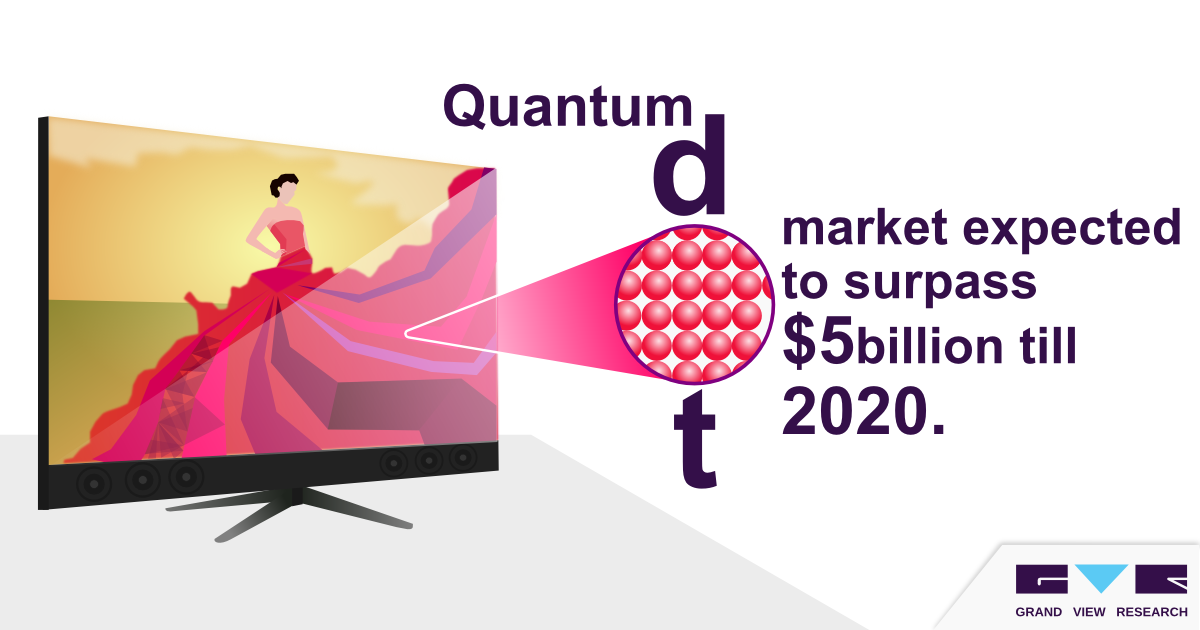 However, with these displays requiring extraction of heavy metals such as cadmium along with other rare earth minerals, which are available in limited quantities, there are stringent Government regulations against their use in manufacture of Quantum Dot display devices, that can hamper future market growth.