PMMA (poly (methyl methacrylate)), commonly known as acrylic, is a transparent thermoplastic that is generally used as a lightweight-shatter-resistant glass alternative. PMMA has various other names such as acrylic glass and plexiglass, and is sold under various brand names such as Plexiglas, Lucite, Perclax, Crylux, Acrylite and Perspex. The material is formed through the polymerization of methyl methacrylate (MMA) monomer. Besides being a glass-alternative, it can also be used as a casting resin, or in coatings and inks.

The material was developed in 1928 by various chemists like William Chalmers, Otto Röhm, and Walter Bauer, and was first introduced in the market under the Plexiglas trademark in 1933, by the German ‘Röhm & Haas AG’, along with its partner and U.S. affiliate ‘Rohm and Haas Company’. The most common method of production is mass polymerization, wherein extruded sheets are often manufactured from polymerized pellets. The original discovery of this process was made by German chemists Fittig and Paul in 1877. However, it was not until 1936 that the process was further refined to produce acrylic safety glass for commercial applications.

Innovations such as anti-algae coatings, non-yellowing sheets that offer high protection against UV and rain, and unusual design flexibility offered for construction applications have also contributed to industry growth in recent years. Among all the thermoplastics, this particular plastic possesses the highest surface hardness and is different from conventional plastics owing to its unique properties such as high transparency, UV resistance, high durability and recyclability. 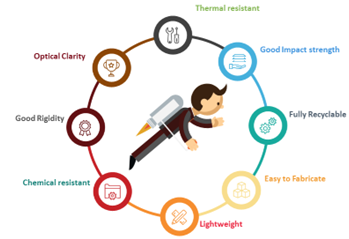 PMMA is completely recyclable as it can be broken down into its constituent parts by using the special thermal process. The product is heated to around 400 degrees Celsius to obtain the staring material methyl methacrylate (MMA). On distillation of the liquid MMA to over 99% purity we get the original material back which can be used again as a starting material. It is an economical alternative for polycarbonate, in matters of flexural strength, tensile strength, UV tolerance and transparency. Another advantage over polycarbonate is that PMMA does not contain bisphenol-A subunits, which are potentially harmful.

There are two kinds of PMMA film processing methods: solvent casting method and the extrusion method, with the latter being further divided into two categories: a T-die extrusion method and a tubular film method. The T-die method involves the process of solidification (a film surface is altered from molten to solid state with the help of a cooling roller). This process is more popular as it results in superior surface smoothness and thickness controllability. 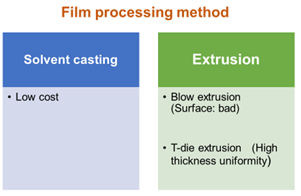 The properties of PMMA can be modified through the addition of comonomers, fillers and additives. Comonomers such as butyl acrylate and methacrylic acid are added to improve impact strength and increase glass transition temperature respectively. Plasticizers can be added to lower the glass transition temperature, or improve processing and impact properties. Dyes can be added in order to impart color for decorative purposes, or as a filter against UV light, while fillers are added to improve affordability.

PMMA finds a very wide usage in a number of applications such as signs and displays, rear-light for vehicles, glass lenses, as well as shatter resistant panels for windows in buildings, bulletproof security barriers, and sanitary-ware, among others. Methacrylate polymers have found extensive usage in dental and medical applications, as these processes require high purity and stability. PMMA is extensively used for constructing aquariums, as well as in exterior automobile lights. Riot control vehicles often replace the regular glass with PMMA in order to shield inmates from thrown objects. The product, under the name ‘Lucite’, was used for the ceiling of the Houston Astrodome.

PMMA films and sheets are widely used in the construction sector, as their usage protects the facades from ultraviolet rays, and help in offering weather protection and thermal insulation. Another advantage is that it requires very low maintenance. The product is utilized in designing submarine periscopes and windshields of aircrafts. An important application area of PMMA films and sheets is in digital signage and displays, with the United States being one of the biggest global advertising markets, which makes it a perfect region for market players to compete in.

The regional U.S. Polymethyl Methacrylate Film And Sheet Market has seen appreciable growth in recent years, which can be attributed to the following factors:

The major market players include Evonik Industries, Arkema Group, Lucite International, Unigel Group, Plazit-Polygal Group, PolyOne Corporation, SABIC and Plaskolite. Some of the developments that the industry has seen by these competitors include: