Bio-based plastics are widely utilized as a substitute for glass in the construction and automotive sector, while also fostering flexibility, low emissions and reduced wastage in display signs and pointers.

Construction spending in developed economies such as the U.S has also been increasing as a result of declining unemployment rates, higher investments in both the residential & commercial sectors, and improved consumer spending. These factors have largely been responsible for driving regional growth across North America and Europe.

Increasing investments in the aerospace & defense sector have also impacted production trends in recent years. The product is increasingly being utilized to design submarine periscopes and aircraft windshields, canopies, and gun turrets with unbreakable and non-shattering shields & windows.

Films are also utilized for innovative applications in optoelectronics, being used to design light guide panels of the backlight units use in LED televisions, display covers, and light guide films. Scratch resistant properties have increased its usage in cellphone screen displays as an inexpensive and environment-friendly alternative to glass.

Increasing demand for lighter & fuel-efficient vehicles in the U.S is expected to positively impact trends in the automobile sector. The U.S is one of the largest manufacturers of automobiles and the product fosters high design flexibility and scratch resistance, leading to its consumption in this regional sector.

The shift in trend away from the mass, large-volume applications towards more specialized, niche applications have also proved conducive to industry growth, as the electronics and signage sectors increasingly explore the potential for new, lightweight & sustainable materials.

Low toxicity, higher biodegradability, thermal & chemical resistance, and durability have driven product demand in several industries such as signs & displays, automotive, and construction among others. Signage & displays occupied the largest volume share of around 33% in 2015 for films in the country.

The U.S is one of the largest advertising markets across the globe. Rapid growth in the advertising industry, influenced by rising profit margins in the corporate sector, has been responsible for driving segment growth. Advertising agencies are thus increasingly utilizing these films & sheets as colorful, attractive, and lightweight alternatives to glass.

Stringent fuel & emission standards adopted by the U.S, such as the Corporate Average Fuel Economy (CAFE), have driven the demand for lightweight and energy-efficient vehicles. Automotive parts are thus expected to emerge as the fastest growing application for sheets, with a CAGR of 4.5% from 2016 to 2025.

Furthermore, technological advancements and new design trends are expected to foster PMMA applications in non-transparent body parts or light guides for LED headlights, particularly in the lower part of the vehicle. 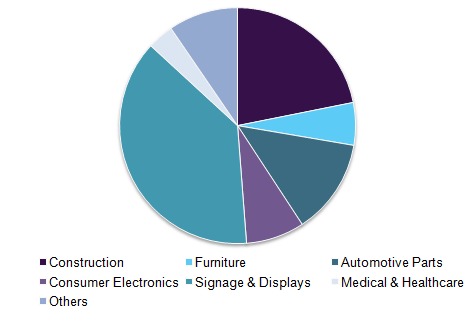 The industry is intensely competitive and dominated by major multinationals such as Evonik Industries, Arkema Group, and Lucite International who contribute to around 70% of the total market share in 2015.

Altuglas and Plexiglas brands of the Arkema Group are the most widely used products across the globe. The Acrylite brand is another major contributor to the sales of Evonik Industries and industry revenue as a whole. Other significant players include the Unigel Group, Plazit-Polygal Group, PolyOne Corporation, and Plaskolite.

The industry is characterized by numerous M&A, and collaborations among existing players who seek to gain a competitive stronghold by leveraging their combined capabilities. Arkema recently acquired the PMMA sheet and block production unit of Repsol YPF Group in order to expand its production capacity. Lucite International has also collaborated with SABIC to produce polymethyl methacrylate under Lucite’s patented Alpha technology.

This report forecasts revenue growth at global, regional & country levels and provides an analysis on the industry trends in each of the sub-segments from 2014 to 2025. For the purpose of this study, Grand View Research has segmented the global U.S. polymethyl methacrylate film & sheet market on the basis of film application and sheet application: