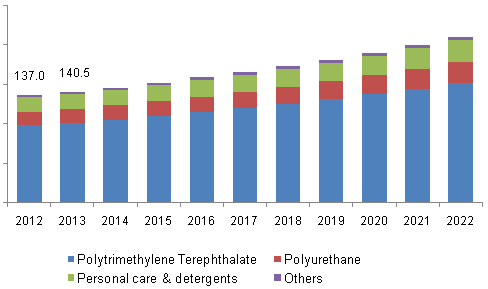 1,3 PDO can be synthesized from both bio-based and petrochemical based sources. Glycerol has been gaining prominence as s major raw material for manufacturing 1,3 PDO. Glycerol is produced as a by-product during biodiesel manufacturing and increasing biodiesel production is also expected to have a positive influence on the market growth. A steady shift towards reducing reliance on petroleum products on account of growing environmental concerns and volatility associated with their pricing has prompted the demand for biodiesel which in turn is expected to impact positively 1,3 PDO market. The current slump in crude prices, though a temporary situation, is presumed to impact the conventional production process positively. Low white space in the industry is anticipated to remain a key challenge for market participants. Increasing R&D initiatives to develop novel bio-based raw materials are expected to yield opportunities for market participants over the forecast period. Bio-based PDO is presumed to witness high growth rate compared to its conventional counterpart.

Traditional products are synthesized from crude oil-based raw materials such as ethylene oxide and acrolein. Bio-based 1,3 PDO can be produced from glycerol and corn syrup. Bio-based methods have several advantages over the conventional production including lower cost, less energy used, product biodegradability, low environmental impact and non-toxic process. On the other hand, traditional methods are cumbersome, expensive and have a higher environmental impact. Such inherent benefits are presumed to compliment the global bio-based 1,3 PDO market growth. R&D initiatives to develop newer bio-based sources promise vast opportunities for the existing as well as new industry entrants. The shift in trends to reduce fossil fuel dependence is also expected to play a critical part in assisting the bio-based raw material market growth.

Polytrimethylene terephthalate (PTT) and polyurethane (PU) are the most dominant applications. It is also used for producing personal care products, detergents, engine coolants, heat transfer fluids and de-icing fluids. PTT production contributes to almost two-third of total consumption in terms of demand and market worth, followed by polyurethane at a distant second. Growing PTT demand across myriad industries is presumed to bolster the PTT market and in turn, assist the overall market. Increasing PTT acceptance as a substitute for other polyesters is presumed to open up multiple opportunities for the industry participants. Strong polyester demand from both emerging as well as developed economies in various industries is projected to aid the global 1,3 Propanediol market.

North America dominated the regional market in terms of both demand and market valuation. The region accounted for approximately three-fourth of global consumption in 2013. Emerging markets such as Asia Pacific and Central & South America are presumed to experience the highest growth rate over the forecast period. Emerging economies such as China, India, Brazil, and Argentina are estimated to lead the regional market growth. Countries such as China, Brazil, Russia and Argentina are taking ardent steps to reduce their fossil fuel dependence and encourage biodiesel production. Favorable regulations and mandates regarding biodiesel in these economies are poised to contribute to the higher glycerol production and in turn, assist the market.

The 1,3 PDO industry is oligopolistic in nature and is characterized by a handful of producers. DuPont dominated the global production scenario since the past few years. The industry has low to medium white space owing to companies developing their proprietary production methods. Shell Chemicals LP has its proprietary method which uses ethylene oxide. DuPont Tate & Lyle have developed their method involving corn syrup. Companies have been involved in mergers and acquisitions with those with access to raw material, technological prowess and regional marketing network in a bid to capture the growing market in the emerging regions. Product development and capacity escalation are the new norms of this industry. The threat of new entrants is low owing to low white space and massive initial investment required to develop new proprietary methods. However, new entrants are forging partnerships with existing players to gain a foothold in the 1,3 PDO market. Recently, Metabolic Explorer, a French producer, licensed out its 1,3 production method to S.K Chemicals. Key industry participants include Shell Chemicals LP, DuPont Tate & Lyle, Metabolic Explorer, Zhangjiagang Glory Biomaterial Co. Ltd and Zouping Mingxing Chemical Co., Ltd.