The global 3D animation market size was valued at USD 13.75 billion in 2018 and is said to expand at a CAGR of 11.0% from 2019 to 2025. Technological advancements in the 3D animation technology, emphasis on producing High-Definition (HD) videos, and wide usage of 3D animated videos in the manufacturing sector to create a graphic illustration of the working of individual components of heavy machinery are expected to be the key factors propelling the market growth.

Other factors that are driving the market include rising implementation of visual effects and Virtual Reality (VR) technology for making movies, growing demand for 3D mobile apps, and increasing the use of 3D mapping technology for GPS and navigation purposes. Developing economies hold a huge growth potential for this market owing to incentives, subsidies, and tax rebates being offered by the governments in these economies to encourage the development of the technology sector. 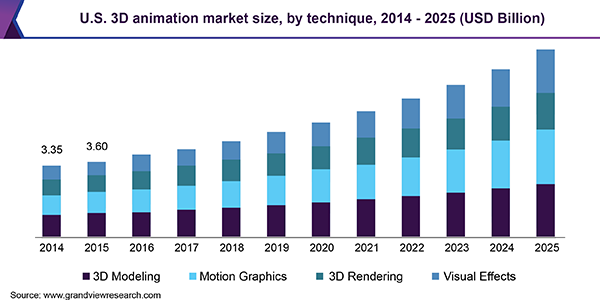 3D animation is being widely used in the healthcare and life sciences industries. Hospitals, laboratories, and research facilities worldwide are using three-dimensional animation as part of the processes to develop treatments and medicines, as well as to aid in surgical procedures. Medical schools are using 3D animated videos to help their students better understand the intricate human anatomy.

Based on technique, the market has been segmented into 3D modeling, motion graphics, 3D rendering, and visual effects. The 3D modeling segment is expected to account for the largest revenue share of the global market by 2025. On the other hand, the visual effects segment is anticipated to expand at the highest CAGR of over 12% from 2019 to 2025. The latest trends, such as using visual effects in commercials to demonstrate the products, utilizing animated logos to engage the audience, and adopting VR in developing games, would contribute to the segment growth.

3D rendering is a technique that allows graphics engineers to project photorealistic representations and develop blueprints for product designing and environmental projects. The technology can also be used as a tool by advertisers for advertising and marketing campaigns, by academic organizations for conveying the consolidated process of graphics to students, and by R&D laboratories to offer innovative visualizations.

The emerging trend of subcontracting the development of visual effects to emerging economies bodes well for the regional markets in developing nations. However, governments of developed nations, such as Canada and the U.K., are trying to counter the trend by providing grants, subsidies, and tax rebates and encouraging the development of visual effects within the country. For instance, the Canadian government has awarded USD 489.26 thousand in repayable contributions to L’Atelier Animation, Luckyhammers Entertainment, and Tonic DNA to support the rapidly growing animation and media industries in Montreal.

Based on components, the 3D animation market has been segmented into hardware, software, and services. The software segment led the global market in 2018 and is anticipated to expand further at the highest CAGR of 12.0% over the forecast period. The segment comprises Software Development Kits (SDKs), plug-ins, and packaged software solutions. Animation software is widely used to develop motion graphics and special effects for feature films, video games, animated gifs, and other media that involves moving images.

The development of stereoscopic imaging software and dedicated animation computers is turning out to be a major driver for the growth of the software segment. Several animation studios are particularly engaging in hyper-surrealism and dynamic function animation. For instance, The Dreamer, the television commercial for Honda created by Roof Studio, gives viewers a realistic experience of the vehicle driving on slanted surfaces and uneven terrains.

The hardware segment also accounted for a significant market share in 2018 and is projected to grow considerably over the forecast period. The segment includes GPU and video cards, workstations, and motion capturing systems. The services segment covers consulting, education & training, integration & development, and support & maintenance. It is anticipated to be the second-fastest-growing segment over the forecast period owing to the rising adoption of the technology in education and training applications.

Based on deployment, the market has been segmented into on-premise and on-demand. The on-premise segment led the market in 2018. On the other hand, the on-demand segment is expected to witness the fastest CAGR of over 12% from 2019 to 2025. On-demand deployment helps reduce infrastructure costs and saves time. It envisages hosting the animation software on the vendor’s server and accessing it via the web browsers. Increasing preference for cloud-based deployment is prompting the providers to offer on-demand deployment of their software for commercial customers.

Based on end-use, the market has been divided into media & entertainment, manufacturing, architecture & construction, education & academics, healthcare & life sciences, government & defense, and others. Media & entertainment is expected to be the leading segment over the forecast period due to the development of photorealistic representations. 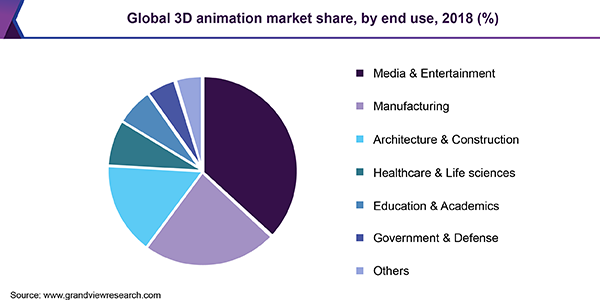 The technology allows architects and engineers to simplify a project and make it sustainable and scalable. For instance, using Inventor or Autodesk Civil 3D along with 3ds Max Design can help in ensuring flexibility while integrating the tasks associated with animation, designing, and digital representation. The manufacturing segment is anticipated to register the highest CAGR of 12.1% from 2019 to 2025.

North America was the dominant regional market in 2018 and is anticipated to retain its leading position over the forecast period. The U.S., in particular, is the largest region in the North American market as a result of the growing adoption of motion graphics and VR across various end-use industries. Asia Pacific is projected to expand at the highest CAGR during the forecast years. India, Japan, and Australia are the key contributors to the region’s growth. Moreover, cities in China, such as Shanghai, Beijing, and Guangzhou, are expected to emerge as gaming hubs, thereby driving the regional market.

This report forecasts revenue and volume growths at global, regional, and country levels and provides an analysis of the latest industry trends in each of the sub-segments from 2014 to 2025. For this study, Grand View Research has segmented the global 3D animation market report based on technique, component, deployment, end-user, and region:

What is the 3D animation market size?

What is the estimated 3D animation market size by 2025?

Which segment accounted for the largest 3D animation market share?

b. North America dominated the 3D animation market in 2019 with a share of 38.2%. This is attributable to the growing adoption of motion graphics and VR across various end-use industries, especially in the U.S.

What is the 3d animation software market share in 2019?

b. The software segment led the global 3D animation market with a revenue share of around 50% in 2019 and is anticipated to expand further at the highest CAGR of 10.0% over the forecast period.

What are the factors driving the 3D animation market?

b. Key factors that are driving the 3D animation market growth include technological advancements in 3D animation technology, emphasis on producing High-Definition (HD) videos, and wide usage of 3D animated videos in the manufacturing sector.

Which are the key players in the 3D animation market?