The global video game market size was valued at USD 195.65 billion in 2021 and is expected to expand at a compound annual growth rate (CAGR) of 12.9% from 2022 to 2030. Advances in technology and continued innovation in both hardware and software to enhance the real-time rendering of graphics are expected to drive the growth of the market over the forecast period. The proliferation of smartphones, the growing internet penetration rate, and the easy availability of games on the internet are expected to contribute to the growth of the market. 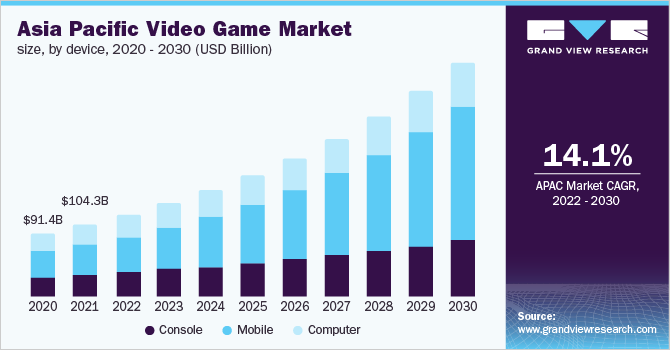 The growing preference for online gaming among individuals is driving the popularity of massively multiplayer online (MMO), Free2Play (F2P), and multiplayer games; and the trend is anticipated to continue over the forecast period. Hence, game developers are focusing on the compatibility and efficiency of hardware. At the same time, the changing consumer preferences and the rising levels of disposable income across the globe are driving the large-scale adoption of advanced gaming consoles equipped with sophisticated features, such as record & share and cross-platform gameplay.

Having realized that several individuals use social media to find the video game of their choice, game developers are launching several games across various genres, including action, role play, simulation, and strategy, on social media to attract customers. The growing popularity of e-sports tournaments and the increasing number of professional gamers are also driving the sales of video games and accessories. The potential of gaming as an educational tool to develop cognitive learning is also being explored. The concept of ‘gaming to learn’ is still in its nascent stages but gaining traction gradually.

While the outbreak of the COVID-19 pandemic took a severe toll on the global economy, the video game industry continued to exhibit remarkable growth. The lockdowns and restrictions on the movement of people imposed by various governments across the globe as part of their efforts to arrest the spread of coronavirus forced people to stay indoors and spend their time in various indoor activities, including playing video games, thereby driving the number of users and the number of hours spent on playing online games. Several gaming companies also released their online games for free downloading.

However, several companies also had to confront delays and interruptions in their product launches in the wake of the outbreak of the pandemic. Various press conferences scheduled to deliver the latest game announcements and trailers were also postponed. For instance, the Game Developers Conference, which was initially scheduled for June 2020, was postponed officially. At the same time, supply chains got disrupted due to the temporary suspension of operations at various manufacturing facilities in China, which affected the production of hardware, including gaming consoles.

The console segment is expected to grow at a considerable growth rate over the forecast period. Lucrative features, such as high-end displays and sound systems designed to provide an improved and enriched experience to gamers, are anticipated to drive the growth of the console segment. Consoles are also equipped with innovative features that allow gamers to record in-game footage and share it online. Dynamic simulation is another lucrative feature featured in next-generation gaming consoles to offer an immersive experience to gamers.

The offline segment dominated the market in 2021 with a share of over 62%. However, the online segment is expected to grow at the highest CAGR over the forecast period. The growth of the segment can be attributed to the growing popularity of multiplayer games. Online games also facilitate in-game communication and contribute toward enhancing the overall gaming experience, which bodes well for the growth of the segment. Social networking sites are particularly proving influential in providing a virtual platform for online video games. 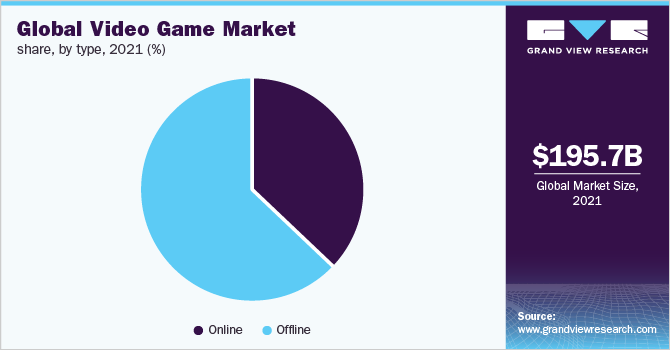 The growing demand for interactive entertainment systems and the rising number of gamers considering online video games as an entertainment tool of their choice are also expected to play a major role in driving the growth of the online segment. The increasing penetration rate of smartphones and the growing preference for cloud gaming is also opening new opportunities for the growth of the online segment. As such, market players are putting a strong emphasis on developing innovative video game consoles to capitalize on the opportunities offered through online gaming.

The Asia Pacific dominated the market in 2021 with a revenue share of over 53%. The emergence of China as a major gaming hub allowed the regional market to dominate the global market. The unabated increase in the smartphone penetration rate in China is driving the growth of the regional market. Tencent Holdings Limited of China has emerged as the largest player in the global video game market owing to the inorganic growth strategies, such as the acquisition of Riot Games and Supercell Oy, which the company has been pursuing aggressively.

The growing number of online gamers and the rising popularity of online gaming tournaments in the Asia Pacific is prompting market players to launch platforms that can potentially allow gamers to access AAA games. For instance, in December 2021, Tencent Holdings Limited partnered with NVIDIA Corporation to launch START, a new cloud gaming service, to allow gamers to access AAA games on underpowered devices. South Korea is expected to contribute significantly to the growth of the regional market owing to the rising popularity of e-sports and massively multiplayer online games in the country.

Market players are largely focusing on the development of next-generation video game consoles and engaging video game content. Popular video game consoles available in the market include PlayStation 4 by Sony Corporation, Xbox One by Microsoft, and Wii U by Nintendo, among others. In April 2022, NFL collaborated with sports technology company StatusPRO to launch a football video game called NFL Pro Era for Meta Quest and PlayStation. Market players are focusing aggressively on innovation and product differentiation to cement their respective market shares.

Market players are also putting a strong emphasis on enhancing customer experience by offering products featuring multi-utility features that allow end-users to play games and browse the internet simultaneously. These multi-utility gaming consoles are anticipated to play a niche role in driving the growth of the market over the forecast period. Market players are also focusing on merger & acquisition deals as part of their efforts to stay competitive in the market. For instance, in January 2022, Microsoft announced plans to acquire video game holding company Activision Publishing, Inc. Some prominent players in the global video game market include:

This report forecasts revenue growth at the global, regional, and country levels and provides an analysis of the latest industry trends in each of the sub-segments from 2017 to 2030. For this study, Grand View Research has segmented the global video game market report based on device, type, and region:

How big is the video game market?

What is the video game market growth?

Which segment accounted for the largest video game market share?

b. The Asia Pacific dominated the video game market with a share of 53.3% in 2021. This is attributable to the ever-increasing smartphone penetration and the growing demand for entertainment in China.

Who are the key players in the video game market?

What are the factors driving the video game market?

b. Key factors that are driving the video game market growth include the growing penetration of internet services coupled with the easy availability and access of games on the internet across the globe.