The global 3D medical imaging devices market size was estimated at USD 10.8 billion in 2017. It is anticipated to expand at a CAGR of 5.9% during the forecast period. Rise in global geriatric populat0ion coupled with the increase in cases of road traffic accidents are expected to drive the growth. Moreover, advancements in 3D imaging technology and investments by government and private organizations are other prime factors propelling the market.

According to a the United Nations (UN) report published in 2017, people aged 65 and above accounted for approximately 13.0% of the total global population. This number is growing at the rate of 3.0% annually. The geriatric population is more prone to musculoskeletal diseases and joint problems. Osteoarthritis is the most common problem for old age people of more than 65 years and is accompanied by increased mortality, and decreased quality of life. The global rise in incidence of chronic and life-threatening diseases are the major drivers for the market. 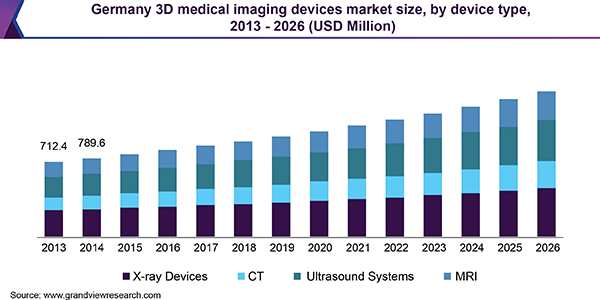 The emergence of automated 3D imaging scanners and on-going R&D development in contrast agents used for 3D imaging are also expected to propel the market growth. For instance, in July 2018, GE Healthcare introduced ready to drink oral solution, Omnipaque (Iohexol) in U.S. The solution acts as a contrast media and aids in visualization in the gastro-intestinal tract.

Moreover, according to the U.S. Centers for Disease and Control (CDC), the participation for organized sports has witnessed a rise in U.S. Approximately 2 million injuries, 0.5 million doctor visits, and 30,000 hospitalizations are recorded among the 30 million adults from U.S. participating in sports each year. This has opened new opportunities for 3D medical imaging devices due to increasing demand for point-of-care imaging coupled with high addressable population.

On the basis of device type, the 3D medical imaging devices market is classified into X-ray, Computed Tomography (CT) devices, ultrasound systems, and Magnetic Resonance Imaging (MRI) equipment. In 2017, the CT segment accounted for the major market share. The nuclear imaging segment is anticipated to expand at the highest CAGR over the forecast period due to high demand for increasing incidence of cancer cases, globally.

The ultrasound systems segment is expected to register a CAGR of approximately 7.0% over the forecast period. The high growth is attributed to the increase in ultrasound scans across the world and new product launches by the industry behemoths. For instance, in June 2018, Siemens Healthineers introduced a new ultrasound system Acuson Sequoia. The system features contrast-enhanced ultrasound imaging, and its BioAcoustic technology increases the bubble longevity and sensitivity and reduces the diagnosis time.

Based on application, the market is segmented into oncology, cardiology, and orthopedic. The orthopedic segment accounted for the largest market share in 2017, whereas, cardiology segment is anticipated to register highest CAGR in the market for 3D medical imaging devices over the forecast period.

The growth in the orthopedic segment is attributed to the rise in road traffic accidents and high number of geriatric population with musculoskeletal disorders. As per the International Osteoporosis Foundation (IOF), an estimated 8.9 million fractures occur every year, which are attributable to osteoporosis and the disease affects more than 75 million people in Europe, U.S., and Japan.

Based on solution, the market is segmented into 3D scanning, rendering, and modelling. In 2017, 3D rendering accounted for the largest market share. This growth can be attributed to the efficient ray tracing algorithms of 3D rendering solutions for organ visualization. 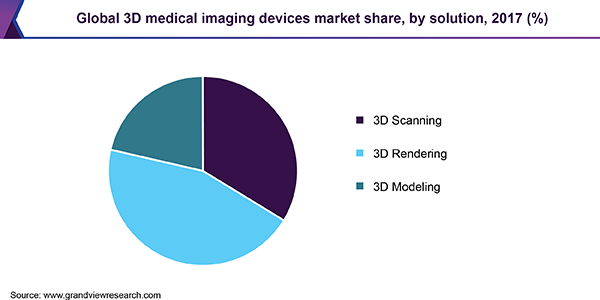 The 3D modelling segment is expected to register the highest CAGR over the forecast period. The growth can be accredited to the increasing usage of 3D modeling anatomical models in the surgical procedures. These solutions save time and enable surgeons to perform surgeries efficiently.

Geographically, the market is segmented into North America, Europe, Asia Pacific, Latin America, and Middle East and Africa (MEA). North America, followed by Europe, collectively accounted for more than 60% market share in 2017. The growth of the North America region is attributed to the higher purchasing power of the healthcare settings, such as hospitals, long term care centers, and advanced specialty centers. Moreover, well established healthcare infrastructure compared to developing regions coupled with favorable reimbursement scenario is anticipated to bode well for regional growth during the forecast period.

Asia Pacific is estimated to exhibit significant growth by 2026 driven by improving healthcare infrastructure and rising medical tourism. However, the high cost of 3D medical imaging devices and low adoption rate are some of the factors hindering the growth of the regional market.

This report forecasts revenue growth at global, regional, and country levels and provides an analysis of the latest industry trends in each of the sub-segments from 2013 to 2026. For the purpose of this study, Grand View Research has segmented the global 3D medical imaging devices market report on the basis of device type, application, solution, and region: