The global 3D projector market size was valued at USD 3.09 billion in 2018 and is expected to grow at a compound annual growth rate (CAGR) of5.4% from 2019 to 2025. The demand for 3D projectors is expected to increase at a global level owing to the significant rise in the use of the 3D technology in areas such as cinema, education, home theater, business presentations, and event management. A 3D projector is used to map three-dimensional data onto a two-dimensional surface and create an illusion of depth, which makes images/videos appear real. The increasing availability of advanced 3D projector solutions with improved image quality and connectivity features is also expected to propel the market growth over the forecast period. 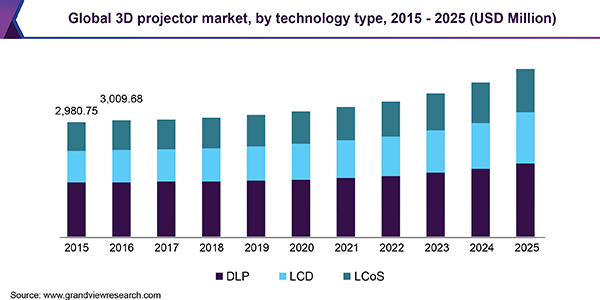 The market is also gaining traction owing to the emergence of new technologies such as Liquid Crystal on Silicon (LCoS), which is a hybrid between Display Light Processing (DLP), Liquid Crystal Display (LCD) technologies, and the development of much smaller 3D projecting units. In the past few years, the demand for LCoS projector solutions has massively increased and is likely to remain high in the near future as well. The promising growth prospects for the technology can be attributed to the high quality of projection achieved by the combination of LCD and DLP projection technologies and the use of liquid crystal chips with a mirrored backing to make the image reflective.

The market is also likely to benefit significantly from the increased use of 3D projector solutions in the gaming industry. By providing lifelike viewing experience to the user, these devices offer the ability to turn a basic game into something more immersive and engaging through projection mapping. Gaming 3D projector solutions also enable gamers to customize several gaming specifications, thus fostering creativity and involvement. Several players in the market are offering products for gaming with increasingly improved features, specifications, and efficiency. For instance, BenQ Corporation’s BenQ HT2150ST has customized gaming modes that allow gamers to see even dark shadows and bright details to get the best realistic viewing experience.

In terms of technology type, the market is segmented into Display Light Processing (DLP), Liquid Crystal Display (LCD), and LCoS (liquid crystal on silicon). The DLP technology captured the largest market share of over 45% in 2018. The growth of the DLP segment is attributed to the technical advantages associated with it, including improved, colorful, and clear image projection with a high contrast ratio. Moreover, DLP devices are comparatively smaller and lighter than LCD or LCoS 3D projector systems. The demand for DLP devices is therefore expected to rise over the forecast period.

The LCD technology is expected to emerge as the fastest-growing segment in the near future, owing to its benefits such as sharper and light-efficient images. The LCD technology is increasingly adopted as it consumes less power, thus generate less heat, and have lower noise. Moreover, LCD 3D projector devices are cheaper than DLP devices. The increased awareness regarding these benefits of LCD products is likely to drive their demand.

In terms of brightness, the 3D projector market has been categorized into less than 2,000 lumens, 2,000 to 3,999 lumens, 4,000 to 9,999 lumens, and 10,000 & above lumens. The 4,000 to 9,999 lumens segment is anticipated to emerge as the fastest-growing segment over the forecast period, owing to the increasing demand for long-range visibility and clarity of the projection. Projectors in this brightness range are majorly used in events & large venues, where clear visibility from a certain distance is a decisive factor behind choosing a device. Furthermore, the demand for 4,000 to 9,999 lumens 3D projector devices has been increasing in the IT, corporate, and hospitality sectors owing to their improved corner projection, edge blending, and vertical projection that are used to display 3D objects.

The 2,000 to 3,999 lumens segment accounted for the dominant share in the market in 2018. 3D projector devices in this brightness range are observed to be majorly used in business and education sectors for projection in conference rooms, training rooms, and classrooms, among others. Furthermore, these devices are also designed to be used in simulators and simulations, where the projection is to be seen from a closer distance with optimum clarity. The segment is expected to continue to account for a significant share in the market throughout the forecast period.

In terms of light source, the market is segmented into laser, LED, lamps, and others. Of these, the laser segment is expected to emerge as the fastest-growing segment over the forecast period. 3D projector devices using laser as a light source have benefits such as longer life cycle and better accuracy. Moreover, their low maintenance needs make them better for high-use settings such as museums, boardrooms, classrooms, and location-based entertainment and large venues. Furthermore, owing to the high-quality picture, several cinema halls are opting these projector devices. The overall demand for these projectors is expected to rise at a steady pace over the coming years.

3D projector devices with an LED light source are anticipated to witness a considerable rise in growth prospects over the forecast period owing to the benefits such as high efficiency, a longer life span, and lower costs as compared to lamp-light based projector solutions. Moreover, the brightness and image quality offered by these devices make them suitable for corporate and event management sectors. Furthermore, LEDs consume low energy and also result in low heat output, thereby contributing to the adoption of LED 3D projector solutions.

In terms of application, the cinema segment accounted for the largest market share of over 25% in 2018. The cinema application segment is anticipated to create growth opportunities for players in the market for 3D projector owing to the increasing number of 3D cinema screens across the globe. Studies suggest that of the more than 50,000 cinema screens in China till 2018, around 86% were 3D compatible. Moreover, advancements in technology have led to the development of more efficient products with higher brightness and clearer picture quality with low maintenance cost. As a result, the segment is likely to expand at a promising pace in the near future as well. 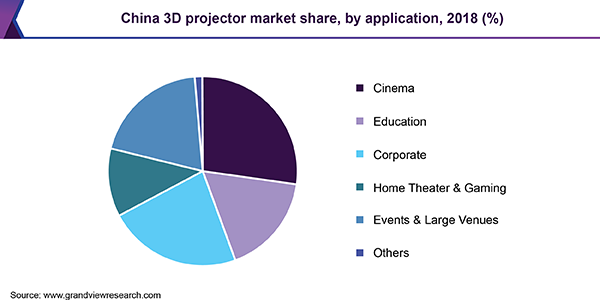 The corporate segment also accounted for a significant share in the market in 2018 and is likely to present promising growth opportunities for market players in the near future. The segment is likely to emerge as the fastest-growing application segment over the forecast period. Owing to the rising demand for projection devices from the corporate sector, companies are developing products with more brightness to cater to the end-users’ flexible working styles. Technological advancements in lumens and light sources have led to the development of more accessible and a varied range of products, which can be installed by even small enterprises in their conference halls/meeting rooms. Furthermore, there are several manufacturers in the market ready to adapt to the increasingly demanding corporate world. For instance, Optoma ZW500T by Optoma Corporation provides 5,000 lumens brightness with WXGA (1280 x 800) resolution for different uses and allows users to easily transmit and display audio and video files with a single cable.

The Asia Pacific regional market for 3D projector accounted for the dominant share of the market in 2018. The promising growth prospects of the regional market are attributed to the flourishing film industries and the inclination of the Chinese audience toward 3D movies. Several production companies in East Asia are investing in 3D movies and videos. Furthermore, rise in digitalization of the education sector is also anticipated to drive the demand for 3D projectors in the APAC region in the near future.

Companies in the market are focusing on new product development, which, in turn, would help improve their market presence. Companies are also investing increasing funds in R&D activities to be able to sustain in the increasingly competitive market.

For instance, in March 2018, Optoma Corporation announced the launch of its new 4k home projector UHD51, which comes with complete 3D compatibility. It features advanced PureMotion frame-interpolation processing for the big screen experience. Also, the UHD51 3D projector is said to be capable of eliminating motion blur and judder, even in fast-paced sports or in high-speed action films. Some of the prominent players in the 3D projector market include:

This report forecasts revenue growth at the global, regional, and country levels and provides an analysis of the latest trends in each of the sub-segments from 2015 to 2025. For the purpose of this study, Grand View Research has segmented the global 3D projector market report on the basis of technology type, brightness, light source, application, and region:

How big is the 3d projector market?

What is the 3d projector market growth?

Which segment accounted for the largest 3d projector market share?

b. Asia Pacific dominated the 3D projector market with a share of 22.1% in 2019. This is attributable to flourishing film industry and growing inclination of the Chinese audience towards 3D movies.

Who are the key companies/players in 3d projector market?

What are the factors driving the 3d projector market?

b. Key factors that are driving the market growth include increasing number of 3D cinema screens worldwide, digitization in the education sector, and increased use of 3D projectors in the gaming industry.