The global furandicarboxylic acid (FDCA) market size was valued at USD 88.2 million in 2014 and is expected to grow with a CAGR of 33.5% from 2015 to 2020. Furandicarboxylic acid or FDCA is an oxidized furan derivative and is a highly stable compound. Owing to its potential of being used as a substitute to a wide variety of petrochemicals such as adipic acid and terephthalic acid, there has been extensive R&D over the past decade.

The product was classified by the US Department of Energy as one of 12 priority chemicals for establishing the “green” chemistry industry of the future. Until today, it was never commercialized in industrial volumes as the production process was not economically viable. The key concern for economic production of FDCA is the instability of the intermediate needed for the production of FDCA - 5-hydroxymethylfurfural (HMF).

The synthesis of 2,5-Furandicarboxylic acid is much easier than the synthesis of HMF, where the main problems are the need for expensive catalysts, the need for high pressure, decomposition of HMF to levulinic and formic acid, separation of DMSO and toxicity of byproducts if DMSO is used as a solvent. FDCA currently supplied is used for the scientific purpose, and the supply is customized based on client requirement.

Economic production of furandicarboxylic acid is expected to lead to a huge demand for bio-based FDCA as it has the potential to replace a large number of petrol-based chemicals and also bio-based intermediates such as levulinic acid and succinic acid. The properties of FDCA result in the superior end product and lesser by-products. Avantium recently announced it had developed an economic way to manufacture FDCA from sugar. However, the availability of raw material would be a key matter of concern over the next six years.

The mass production of FDCA has to be served by huge feedstock input which would make the raw material suppliers a key part of the market. Cargill is one of the largest suppliers of bio-based raw materials such as sugar. Avantium has collaborated with Cargill for the supply of starch-based feedstock to run their pilot plant.

The report is based on the market potential for FDCA over the next six years taking into account the economic production of FDCA by Avantium post commercialization in 2016. There can also be other potential producers, as several patents in the area of HMF, and FDCA synthesis was filed in the past few years. For example, the Wisconsin Alumni Research Foundation has developed a method for selective dehydration of carbohydrates to produce furan derivatives (mainly HMF) with high yields in a separation friendly solvent. Despite this and other patents available in this area, no other than Avantium published agreements on commercialization were done yet.

FDCA is considered an important renewable feedstock in the production of polyesters and is expected to be a potential substitute for PTA owing to its low production cost and biodegradability. Relatively simpler conversion process of FDCA into plastics as compared to polyester production through PTA is expected to further positively impact its demand.

The potential application segments covered in the report include PET, polyamides, polycarbonates, plasticizers, and polyester polyols. The use of FDCA in the production of PET is expected to have the highest market potential by 2020, accounting for over 60% of global consumption. Since PET is used in the food and packaging industry, there is a key interest in the development of bio-based PET.

With the replacement of terephthalic acid by FDCA and by using renewable EG, a 100% renewable polyester, such as 2,5-furandicarboxylate (PEF) can be used in film and bottle applications owing to its excellent barrier properties. 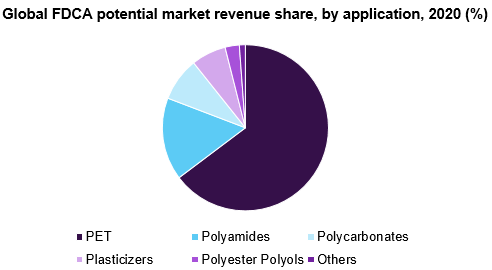 The other important application of the product is expected to be polyamides. The segment is expected to account for over 15% of FDCA consumption in 2013 and is expected to gain importance in the development of novel property bio products. Plasticizers are another key application segment due to the need for a substitute for phthalate-based plasticizers, and FDCA esters can be an ideal replacement.

As of 2013, there are very few companies that manufactured and sold the product on demand due to the lack of economic viability. The main current producers of FDCA are Synbias, V & V Pharma Industries, Carbone Scientific Tokyo Chemical Industry, and Chemsky. However, Aventium has announced a new technology involving a reactive separation technology and catalyst which would result in the economic production of FDCA at USD 1000 per ton from 2016.