The global acromegaly treatment market size was estimated at USD 1.2 billion in 2018 and is expected to exhibit a CAGR of 7.5% during the forecast period. Increasing incidence of the disease is contributing to the high demand for the advanced treatment options which further boost the development of newer molecules. The pharmaceutical companies are constantly investing in R&D for developing new formulations and newer route of administration of the existing drugs.

Prevalence of genetic diseases and changing lifestyles are expected to lead to rising demand in the forthcoming years. Rising incidence of hormonal diseases, such as hypopituitarism and endocrine diseases is projected to further support the growth. Technological advancements coupled with government support are anticipated to create growth opportunities for the market players. 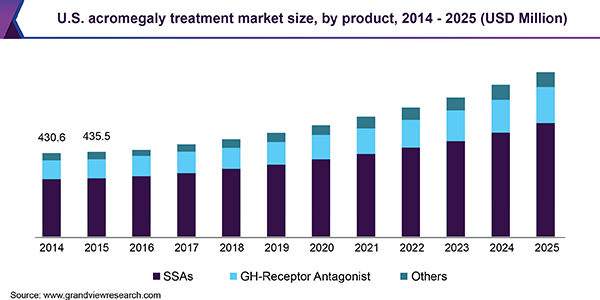 A strong pipeline of drugs is the key factor driving the acromegaly treatment market. For instance, seven somatostatin analogs and two growth hormone receptor antagonists are expected to receive FDA approval by 2027. Moreover, the advent of technologically advanced detection techniques such as radiosurgery, radio labeled imaging technologies providing cost efficiency coupled with minimum side effects are expected to provide growth platform to this market.

Favorable government insurance policies and schemes for patients with rare diseases are another key contributing factor for the market growth. For instance, in the U.S. and Europe, multiple government healthcare organizations, such as the National Institutes of Health (NIH) and the National Center for Advancing Translational Sciences (NCATS) offer subsidized medicines for rare diseases. In Japan, acromegaly has been listed as intractable disease and the whole treatment cost is covered under insurance. The aforementioned initiatives are anticipated to boost the growth in the near future.

The somatostatin analogs have been prescribed as the first line treatment options by the healthcare physicians over the past few decades as the therapy owing to wide availability of drugs and cost efficiency. The SSAs segment accounted for the largest market share in terms of revenue in 2018. The marketed drugs available are Sandostatin LAR, Signifor LAR from Novartis and Somatuline Depot from Ipsen Pharma. The patent expiry of Sandostatin LAR in 2014 has not impacted its market much, owing to the absence of generic drugs.

Moreover, a strong pipeline of drugs is expected to propel the growth in the near future. For instance, Somatuline Autogel by Ipsen Pharma, CRN-00808 by Crinetics Pharmaceuticals, MYCAPSSA oral by Chiasma Inc. is currently under clinical trial and is expected to receive approvals in the coming years.

The only Growth Hormone Receptor Antagonist (GHRI) currently available isSomavert (Pegvisomant) from Pfizer Inc. The drug patent expired in U.S. and five European countries in 2017. But it will not have a major impact on the market as there is no such generic competition. Presently, two GHRIs are in the pipeline such as ISIS 766720 by Ionis Pharmaceuticals, Inc. currently undergoing phase II clinical trial and is expected to get completed by December 2019.

The hospitals and clinics segment accounted for the largest revenue share in 2018, attributed to a large number of diagnostic procedures and surgeries performed in these facilities. In addition, advanced diagnostics facilities and the availability of surgeons is contributing to its largest market share. On a contrary, lack of awareness among people regarding the disease and late detection may restrain the growth in the near future. 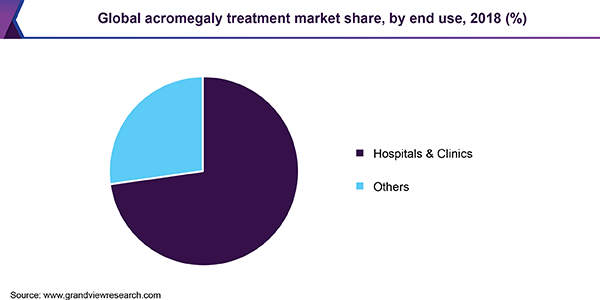 The others segment includes government and private organizations. For instance, in 2016 one research study was conducted in China government hospital where 527 acromegalic patients had been detected via facial photographs through machine learning process. This initiative further encouraged the early detection of the disease among the population.

North America accounted for the largest revenue share in 2018, owing to the increasing prevalence of the disease coupled with favorable government policies. According to a report by the U.S. Endocrine Society, the prevalence of acromegaly was 40 to 125 cases per million in 2016. Moreover, the rise in collective efforts by major players to develop new formulations and ensure high-quality products is projected to boost the regional demand. For instance, BIM23B065 by Ipsen Pharma has completed the phase 2 clinical trial in 2017 and preparing for phase 3 trial.

On the other hand, Asia Pacific is projected to observe the fastest CAGR throughout the forecast period. Growing healthcare spending by the countries such as China and India coupled with increasing investment by the pharmaceutical companies is projected to present remunerative growth opportunities in near future. For instance, Sun Pharma and WOCKHARDT are developing new formulations for octreotide molecule and currently in the pre-clinical phase.

The market is consolidated in nature and is marked by the presence of various small and large companies. It is led by participants, such as Ipsen Pharma; Novartis AG; and Pfizer Inc. among others. Many new and key contributors have emerged in the last few years.

Companies are focusing on implementing strategies, such as development of new formulations, partnerships and distribution agreements, and regional expansion to increase their revenue share. For instance, Novartis launched Signifor LAR in a probe to retain their market share after the patent expiry of Sandostatin LAR in 2014. Moreover, Chiasma Inc. is trying to develop oral octreotide which has an easier route of administration and is under clinical trial phase. Furthermore, ISIS 766720 by Ionis Pharmaceuticals, Inc. is currently under phase 2 clinical trial and is expected to get completed by 2019.

This report forecasts revenue growth at global, regional, and country levels and provides an analysis of the latest industry trends in each of the sub-segments from 2014 to 2025. For the purpose of this study, Grand View Research has segmented the global acromegaly treatment market report on the basis of product, site, end use, and region: