The global somatostatin analogs market size was valued at USD 5.5 Billion in 2018 and is expected to grow at a CAGR of 6.3% over the forecast period. The increasing prevalence of Neuroendocrine Tumors (NETs), acromegaly, Cushing syndrome, and other related diseases is expected to accelerate the growth of this market in the near future.

According to statistics published in the American Association of Neurological Surgeons, it is estimated that around 10-15 per million people are affected by Cushing’s syndrome each year. Furthermore, the syndrome commonly affects adults between 20-50 years and is comparatively, more prevalent in females. 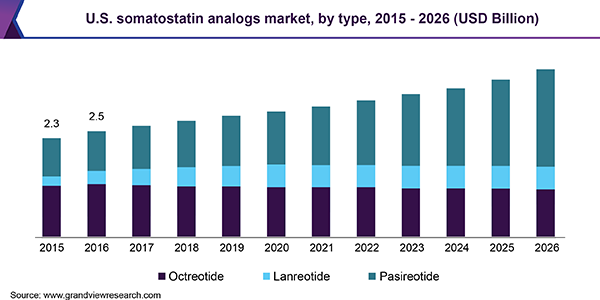 In addition, according to the data published in the NCBI in 2018, the prevalence of acromegaly is approximately 4,600 per million population globally. Moreover, around 116.9 new cases per million of acromegaly are observed every year globally.

Rising R&D initiatives and the launch of novel drug therapies are some of the factors driving the growth of the somatostatin analogs market. For instance, Signifor (Pasireotide) was launched by Novartis AG in 2012 for the treatment of Cushing’s syndrome and in 2014 for acromegaly.

The presence of favorable government insurance policies & schemes for patients with rare diseases is another key contributing factor to the overall market growth. For instance, in the U.S. and Europe, multiple government healthcare organizations, such as the National Institutes of Health (NIH) and the National Center for Advancing Translational Sciences (NCATS) offer subsidized medicines for rare diseases.

Based on type, the market is classified into octreotide, lanreotide, and pasireotide. Octreotide dominated the overall type segment in 2018 due to its various therapeutic applications such as acromegaly, carcinoid tumors, and vasoactive intestinal peptide tumors.

Sandostatin is the first somatostatin analog approved by Novartis AG. The presence of generics of Sandostatin in the market is expected to affect its market share over the forecast period. Pasireotide is estimated to be the fastest-growing segment over the forecast period due to its efficacy in patients with Cushing syndrome and acromegaly. In addition, the product is experiencing its peak sales due to its launch in 2014 for acromegaly. Also, it is under phase II clinical trials for advanced/metastatic hepatocellular carcinoma.

Based on application, the somatostatin analogs market is segmented into acromegaly, NETs, and others. Acromegaly was estimated to be the largest segment in 2018 as well as the fastest-growing segment over the forecast period. 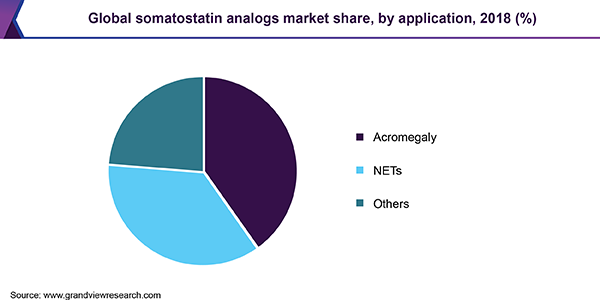 NETs were estimated to be the second-largest application segment in 2018. The increasing incidence of NETs is anticipated to be the major driver governing the segment growth. According to the data published in the American Society of Clinical Oncology (ASCO) in 2019, more than 12,000 people in the U.S. are diagnosed with neuroendocrine tumors each year and around 170,000 people are currently suffering from the disease.

North America dominated the market and is expected to contribute over 52% of the revenue share. The high prevalence of acromegaly and NETs is predicted to be the preliminary driver responsible for regional growth. In addition, the presence of key players in the region such as Pfizer Inc. and Novartis AG, and increasing awareness levels amongst individuals are also expected to drive the market growth.

Asia-Pacific is estimated to witness the fastest growth over the forecast period. An increase in the rate of NET diagnosis in countries such as India, Japan, and South Korea coupled with rising per capita income is one of the high-impact rendering drivers for the market.

Furthermore, increasing investment by pharmaceutical companies is projected to present remunerative growth opportunities in the near future. For instance, Sun Pharma and WOCKHARDT are developing new formulations for octreotide molecules and are currently in the pre-clinical phase.

Companies are focusing on implementing strategies such as the development of new formulations, partnerships & distribution agreements, and regional expansion to increase their revenue share. For instance, Chiasma Inc. is developing oral octreotide which has an easier route of administration and is under phase III clinical trial.

This report forecasts revenue growth at global, regional & country levels and provides an analysis on the industry trends in each of the sub-segments from 2015 to 2026. For the purpose of this study, Grand View Research has segmented the global somatostatin analogs market on the basis of type, application, and region: