The global aerospace & defense c-class parts market size was estimated at USD 15.21 billion in 2019 and is projected to expand at a compound annual growth rate (CAGR) of 4.5% from 2020 to 2027. The high potential for product adoption in aerospace applications to improve the strength and durability of aircraft parts is expected to drive market growth over the forecast period. Growing passenger traffic, especially in Asia Pacific and Middle East & Africa regions, is expected to drive the demand and production of next-generation commercial aircraft. This is projected to result in a slight recovery in aircraft production, after it experienced a slowdown in 2016, thus leading to a rise in product demand. Aerospace c-class parts manufacturers purchase raw materials either directly from suppliers or through third-party suppliers to produce customized components for their clients. 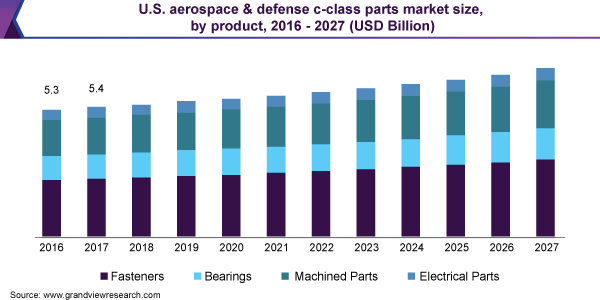 The recent outbreak of COVID-19 may hinder market growth, as manufacturers were unable to export the product owing to the trade limitations placed by the various governments. In addition, the majority of the manufacturers suspended operations across all the major economies to comply with the norms for lockdown. The market is expected to witness a supply-demand gap in the near future, leading to a rise in an order backlog of aircraft deliveries. This is expected to encourage the OEMs (aircraft manufacturers) as well as tier 1, 2, and 3 suppliers to temporarily expand their production capacity to match the order backlog.

The is expected to exhibit high competitive rivalry, owing to the presence of a large number of companies offering suitable products to tier 1 and tier 2 suppliers. The c-class manufacturers strive to attain long-term contracts with the suppliers, to gain a competitive edge over the others, thereby increasing the market competition.

Fasteners accounted for the largest market share of more than 44% in 2019. The segment is expected to retain its leading position owing to the high consumption of fasteners, including rivets, bolts, screws, washers, nuts, seals, and rings, which are used as essential components in the assembly of aircraft parts.

Bearings are one of the essential components, which are used to eliminate heat damage and ladder cracking in shock absorbers or landing gear struts. The segment is expected to observe significant growth, owing to high usage of bearings for overall weight reduction, to improve load-bearing capacity of the structure, as well as to prove long service span.

The electrical parts segment is expected to witness robust growth over the forecast period owing to the rising use of electrical parts, including filters & filtered connectors, communication systems, flight control systems, navigation systems, and motors in the aftermarket for the smooth operation of power supply and avionics.

Machined parts are expected to witness significant growth, in terms of revenue, over the projected period, owing to a rise in the substitution rate of aluminum and other heavy metals with aluminum and titanium alloys as well as composites, which are comparatively expensive.

Commercial aircraft accounted for the largest market share of more than 58% in 2019 and is projected to expand further at the maximum CAGR from 2020 to 2027, owing to the high product demand from the aftermarket. High passenger and freight traffic across the globe is projected to boost the MRO activities for commercial aircraft, which is expected to aid the demand further.

The increase in military spending by various governments across the globe is expected to have a positive impact on the market. The rising use of military transport aircraft to move troops and materials, such as tanks, automotive vehicles, and helicopters, is expected to drive the product demand.

Other military aircraft include bombers, transporter-tankers, early-warning, and patrol aircraft, and a variety of propeller- and jet-driven trainers. Business & general aviation is expected to have a significant growth from 2020 to 2027 as a result of rising demand for business aircraft due to its increased mobility, enhanced productivity, and improved efficiency. 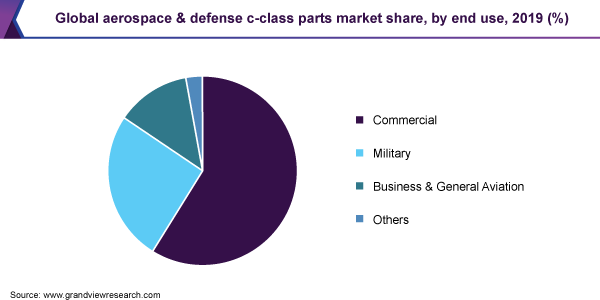 Rising initiatives by governments across the globe for the exploration of outer space are expected to drive the demand for c-class parts for spacecraft and experimental aircraft. In addition, increasing investments for successful implementation of Unmanned Aerial Aircraft or Vehicles (UAVs) are expected to support market growth.

The aerostructure segment accounted for the largest market share of over 46% in 2019 and is expected to continue the trend over the forecast period. The segment requires a large number of fasteners for the assembly of various components, including the fuselage, door pairings, wings, airframe, undercarriage, and empennage.

Engine applications are expected to witness steady growth over the forecast period. This growth can be attributed to the rise in the replacement of older engines with fuel-efficient engines. In addition, the segment exhibits the highest aftermarket consumption of fasteners and bearing, owing to its crucial requirement.

The Asia Pacific is estimated to be the fastest-growing regional market from 2020 to 2027. Increasing military expenditure in India, China, and Japan, are expected to drive the demand for military aircraft, thereby driving the market growth in the Asia Pacific. In addition, huge growth in passenger traffic owing to increasing per capita income and growing population is expected to aid the market growth.

Europe is expected to witness a steady CAGR from 2020 to 2027, owing to rapid growth in the production of cabin interior components in the region. Europe's aerospace & defense market is expected to surpass the U.S. market over the forecast period, owing to increased defense spending by some European countries, such as Russia and Italy, which is projected to have a positive impact on the overall market growth.

The market exhibits intense competition between the players owing to the robust demand from the aircraft manufacturing industry. Established players in North America and Europe are expected to face immense competition from the emerging players in Asia, Middle East & Africa, and Latin America, who offer comparatively low-cost solutions. Some of the prominent players in the aerospace & defense c-class parts market are:

This report forecasts revenue growth at global, regional, and country levels and provides an analysis of the latest industry trends in each of the sub-segments from 2016 to 2027. For the purpose of this study, Grand View Research has segmented the global aerospace & defense c-class parts market report on the basis of product, application, end use, and region:

How big is the aerospace & defense c-class parts market?

What is the aerospace & defense c-class parts market growth?

b. Fastener products dominated the aerospace & defense c-class parts market with a share of 44.7% in 2019. This is attributable to high consumption of fasteners for aerostructure, where the product is essentially used for assembly of components.

Who are the key players in aerospace & defense c-class parts market?

What are the factors driving the aerospace & defense c-class parts market?

b. The key factors that are driving the aerospace & defense c-class parts market include growing passenger & freight traffic across the globe, rise in MRO activities, and an increase in the rate of fleet replacement.