The global aerospace parts manufacturing market size was estimated at USD 907.2 billion in 2019 and is expected to expand at a CAGR of 4.1% from 2020 to 2027. Rising demand for lightweight, new-generation, and fuel-efficient aircraft, owing to the emphasis on reducing greenhouse emissions is predicted to boost the growth. 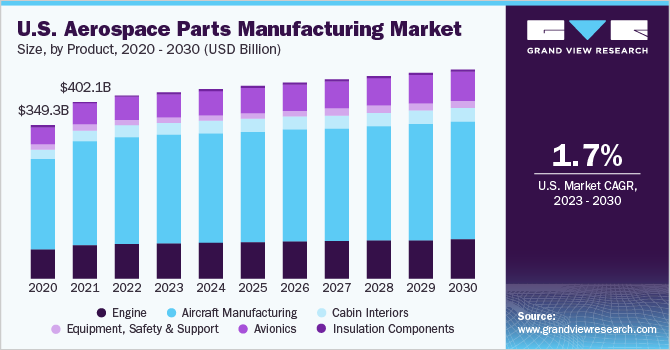 Replacement of in-service aging aircraft with fuel-efficient aircraft is impelled by rising energy costs, which accounts for a significant share in the operation of commercial airlines. In addition, increasing emphasis to reduce total aircraft weight by using lightweight parts attempting to improve its energy efficiency is likely to have a positive impact on market growth.

The U.S. exhibits the largest market for aircraft parts manufacturing, owing to the presence of established aircraft manufacturing base, coupled with huge potential for aerospace Maintenance, Repair, and Overhaul (MRO) activities. Also, advanced technological capabilities, coupled with airworthiness for the production of superior quality products, including critical aircraft parts, such as wings and fuselage are expected to surge the market growth.

Tier 1 suppliers, such as systems and major structure manufacturers are engaged in the manufacturing of aero engines, turbines, jets, and engine propulsion systems, experience severe pressure from Original Equipment Manufacturers (OEMs). As a result, the industry demonstrates increasing consolidation through tier 1 of the supply chain, owing to rising mergers and acquisitions to reduce the supply chain complexity.

The market has witnessed an inclination toward the incorporation of lightweight materials for aerospace parts manufacturing, on account of improvement in terms of performance and cost-efficiency of the end-use structure. The market participants are exhibiting a preference for lightweight aluminum alloys on account of its superior corrosion resistance and ability to retain strength at high temperatures.

The players operating in the aerospace parts manufacturing market face competition in terms of product quality and design. They are targeting customers with customized requests to sustain in the market. The major players are likely to adopt emerging technologies such as additive manufacturing to replace the traditional manufacturing process of smaller aircraft components with complex structures.

The insulation components segment was valued at USD 22.3 billion in 2019 and is expected to witness the fastest CAGR of 6.3% over the projected period, owing to the rapid replacement rate of the products. Rising aircraft MRO activities, owing to the expanding aircraft fleet, is predicted to fuel the demand for these components over the projected period.

Increasing usage of composites for manufacturing fuselage to reduce fatigue maintenance, in high tension loaded environment, is expected to drive the overall cost of aero-structure thereby impacting the market on a positive note. The segment led the market in 2019 and this trend is expected to continue over the forecast period.

Cabin interior manufacturing is estimated to reach USD 117.4 billion by 2027, owing to extensive use of high-strength and lightweight materials. Cabin interiors exhibit less complex structure as compared to airframe parts, however, it demonstrates mechanical requirements set by regulatory authorities, such as stringent fire, smoke, and toxicity limits.

Commercial aircraft dominated the market for aerospace parts manufacturing in 2019 with a value of USD 467.4 billion in 2019. The segment estimated the highest demand owing to the rise in passenger and freight traffic. Increasing demand for cargo services, with improved trade relations across the globe, is expected to drive the segment growth over the forecast period. 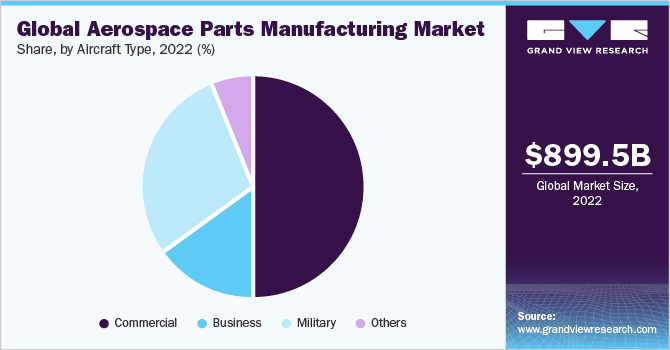 Increasing demand for advanced composite materials for the manufacturing of innovative fighter planes is expected to aid market growth. Also, increasing demand for aerospace parts from NATO countries for surveillance aircraft as well as fighter aircraft, owing to rising security threats is anticipated to positively impact the growth over the forecast period.

Increasing government initiatives for space exploration is predicted to benefit the growth of the market for aerospace parts manufacturing. Rising demand for drones and Unmanned Aerial Vehicles (UAVs) is expected to play an essential role in the growth. The rising use of unmanned aerial vehicles for military reconnaissance is expected to aid the segment expansion in near future.

North America contributed to over 50% of the total revenue share in 2019, owing to the presence of key aircraft parts manufacturers coupled with the huge aircraft manufacturing industry in the region. Ascending demand for new-generation aircraft is expected to boost regional growth over the forecast period.

Asia Pacific is estimated to be the fastest-growing market, registering a CAGR of 6.7% during the forecast period, owing to the rapid growth of the aviation industry in the region, augmenting the growth of the maintenance, repair, and overhaul service market.

Europe is anticipated to witness stable growth owing to the stability of investments in R&D in the aerospace and defense sector in the region. The market also boasts of a highly innovative and cutting-edge research approach. The rapid rise in the production of cabin interior components is anticipated to drive the regional market growth over the forecast period.

The market has witnessed increased competition, on account of the rapid growth of Asian manufacturers. The players compete on the basis of differentiation in technology, design, product performance, and compliance with customer specifications. In addition, timely product delivery, market goodwill, superior customer service and support, and price also affect the competition.

This report forecasts revenue growth at global, regional, and country levels and provides an analysis of the latest industry trends in each of the sub-segments from 2016 to 2027. For the purpose of this study, Grand View Research has segmented the global aerospace parts manufacturing market report on the basis of product, end-use, and region:

Who are the key companies/players in the aerospace parts manufacturing market?

How big is the aerospace parts manufacturing market?

b. The global aerospace parts manufacturing market size was estimated at USD 907.2 billion in 2019

What is the aerospace parts manufacturing market growth?

b. Commercial aircraft dominated the market in 2019 with a value of USD 467.4 billion in 2019. The segment estimated the highest demand owing to the rise in passenger and freight traffic.

Suspension of manufacturing at plant locations coupled with supply chain disruption owing to raw material and component unavailability is expected to severely impact the market. Furthermore, the industry has pending aircraft deliveries which are expected to get released after the COVID impact blows over. We at GVR are trying to quantify the impact of this pandemic on the aerospace parts manufacturing market. Get your copy now to gain deeper insights on the same.