The Africa roaming tariff market size to be valued at USD 2.5 billion by 2027 and is expected to grow at a compound annual growth rate (CAGR) of 5.5% during the forecast period. Roaming tariff is the charge incurred by the communication service providers by allowing the customers to access their communication devices outside the geographical coverage of the network. Roaming tariffs vary nationally and internationally. The growing adoption of smartphones and the internet has put a positive impact on the market. Moreover, an increasing number of international travelers is expected to increase the demand for roaming tariffs in Africa. Similarly, roaming tariffs implied on services such as voice, data, and SMS are different. 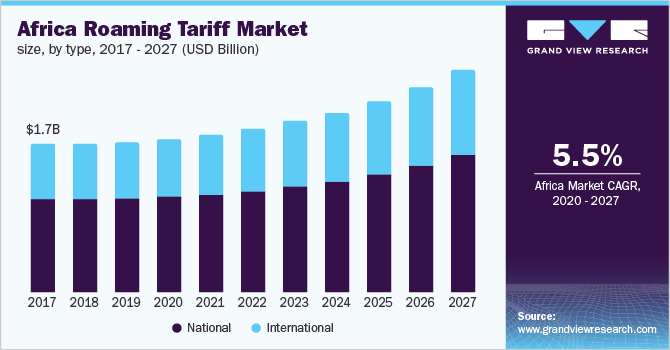 The market for roaming tariffs in Africa is expected to witness significant growth over the forecast period owing to an increasing mobile subscriber base coupled with rising internet penetration. The number of smartphone users in Africa is growing at a substantial rate. For instance, according to the GSM Association, the number of SIM connections was 774 million and is expected to reach up to 1.0 billion by the end of 2025 in Africa. Owing to the above-mentioned facts, technological awareness is rising among the consumer base across the region.

Sub-Saharan Africa is expected to have a major contribution to the market growth owing to increasing mobile subscriptions in this region. According to the GSMA Association, by 2025, 50.0% of the total population is projected to subscribe to mobile services. Countries such as Nigeria, Ethiopia, the Democratic Republic of the Congo (DRC), Tanzania, and Kenya, will contribute to the growing penetration rate of the mobile subscriber base. GSMA also states that subscriber penetration of the Economic Community of West African States (ECOWAS) and the Southern African Development Community (SADC) will increase from 48.0%, and 44% in 2018 to 54%, and 50% respectively by 2025.

The Mobile Network Operators (MNO) and network providers are indulged in making investments in the region. Various initiatives are introduced by the regulatory authorities and the MNO/ network operators to expand the existing customer base. For instance, the KaiOS ‘smart feature phone’ initiative is projected to give impetus to smartphone adoption. The KaiOS initiative is led by some of the leading operators in the region, such as Vodafone Group, and AT&T Inc. is expected to boost smartphone adoption in the area.

Moreover, the launch of the One Network Area (ONA) roaming initiative in East Africa intends to reduce the high tariff associated with mobile roaming to promote regional integration. The ONA is based on specific regulatory norms, one of which is, the elimination of roaming tariffs on receiving calls in Rwanda, Kenya, Uganda, and South Sudan if the call originates in one of the mentioned countries. Similar regulatory initiatives are emerging in other parts of Africa, which are expected to drive the market for roaming tariffs in Africa from 2020 to 2027.

The increased mobile subscriber base is driving the growth of the market. The number of smartphone users is observed growing rapidly. With the emergence of new mobile companies, the region is flooded with a wide range of smartphone options for users, providing features with enhanced technologies and improved network connectivity. In addition to being technologically improved, they are available at budget prices. Thus, people in the region are swiftly adopting smartphones thereby, augmenting the market growth. Furthermore, the technological advancements in connective technology from 3G to 4G and now 5G are further increasing the industry growth.

Many low-cost handsets are restricted from roaming and the network coverage, owing to technical obstacles such as interoperability due to the use of various 3G/GSM spectrums. This is observed because 3G continues to remain underdeveloped as operators are rolling out the outdated technology while upgrading to newer ones such as 4G and 5G. In addition, various roaming regulations such as taxation and pricing-related policies are factors anticipated to hamper market growth.

However, enhanced investments from service operators to provide reliable services to users is anticipated to boost the market growth. Likewise, increased investments from communication service providers are anticipated to reduce the intensity of the technical barriers and enhance users’ roaming experience accordingly benefiting the industry positively and thereby promoting its growth in the region.

The retail roaming channel is expected to witness a CAGR of 6.0% over the forecast period. The ONA initiative demands that MNOs renegotiate with their roaming partners to reduce tariffs and offer cheaper services to their customers. Moreover, the implementation of the wholesale channel has many regulatory limitations due to the involvement of a larger customer base. For instance, as per the call termination regulation in South Africa, published in September 2014, wholesale interconnection tariffs are charged between fixed and mobile network operators. Hence, it gives less flexibility for the operators to vary their tariffs, which is not the case in the retail channel.

Based on services, the market roaming tariff in Africa is categorized into voice, SMS, and data. The data service type is expected to exhibit the highest CAGR of over 6.0%. The increasing adoption of smartphones in the region is expected to cater to the significant growth of the data roaming service. As per GSM Association, the subscriber base of mobile internet usage is expected to reach up to 483.0 million in 2025 from 239.0 million in 2018, which, in turn, augments the usage of data roaming in the region. 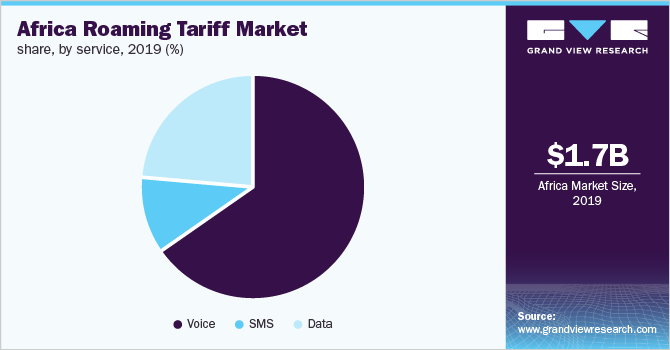 Although, the voice service segment holds the major share of the service segment of over 60.0% as compared to SMS and data. Voice is the preferred communication medium among customers as conveying information is easier. The other service types, such as SMS and Data, are more prone to intrusions, and 100% safe communication is not assured. Voice communication is feasible by both literate as well as illiterate people. The above-mentioned factors lead to high adoption of voice service rather than any other service type.

Sub-Saharan Africa accounts for the significant revenue share generated by the market for roaming tariffs in Africa. Increasing operator revenue from USD 42.0 billion to USD 51.0 billion will account for the growth of the market for roaming tariffs in Africa. Various investments and initiatives, such as ONA and KaiOS, are projected to have a positive impact on market growth. For instance, in September 2016, Bharti Airtel Ltd. launched a new International Roaming (IR) pack that provides free incoming calls and texts to India on international roaming. The above-mentioned development of the company enabled Bharti Airtel Ltd. to increase its customer base by attracting international traveler subscriptions. Moreover, the presence of all the major players, such as Vodafone Group; and AT&T Inc. in the market in sub-Saharan Africa, has also led to significant market growth in the region.

Major players operating in the market for roaming tariffs in Africa include America Movil; AT&T Inc.; Bharti Airtel Ltd.; China Mobile Ltd.; Deutsche Telekom AG; Digicel Group; Sprint Corporation; Telefonica SA; Verizon Communications Inc.; and Vodafone Group plc. The market for roaming tariffs in Africa is moderately consolidated due to abundant growth opportunities in the region. Thereby, all established players are trying to sustain their market position. The above-mentioned players are involved in launching new service lines at competitive prices. Additionally, the key players are entering into mergers and acquisitions/strategic partnerships.  For instance, in January 2019, Verizon Communications Inc. acquired Protect Wise Inc. with an aim to expand its network detection and response with respect to security threats. This step was taken to serve the growing 5G market. Similarly, in October 2018, the wholesale business unit of Telefonica SA, Telefonica International Wholesale Services, announced the launch of data roaming monitoring solution. Through this initiative, the company is expected to expand the range of its international connectivity services.

The report forecasts revenue growth at regional and country levels and provides an analysis of the latest industry trends in each of the sub-segments from 2016 to 2027. For the purpose of this study, Grand View Research has segmented the Africa roaming tariff market report based on type, distribution channel, and service: 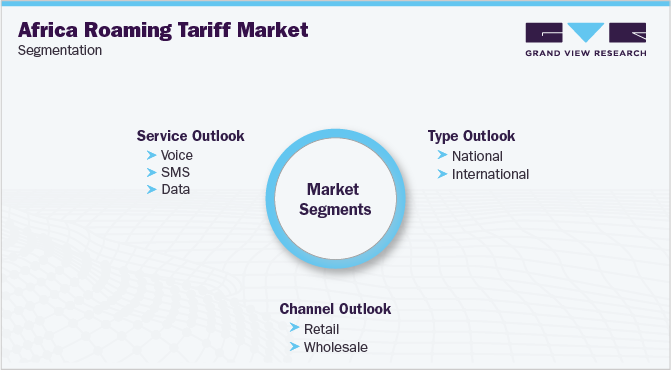 How big is the Africa roaming tariff market?

What is the Africa roaming tariff market growth?

b. Data service type segment dominated the Africa roaming tariff market with a share of 23.9% in 2019. This is attributable to the increasing adoption of smartphones and the significant growth of the data roaming service.

Who are the key players in Africa roaming tariff market?

What are the factors driving the Africa roaming tariff market?

b. Key factors that are driving the market growth include the growing adoption of smartphones coupled with the increasing number of international travelers.