The global air ambulance services market size was valued at USD 15.73 billion in 2021 and is projected to expand at a compound annual growth rate (CAGR) of 10.6% from 2022 to 2030. According to the World Health Organization (WHO), chronic diseases are the leading cause of death worldwide and represent over 60% of the total deaths. Nearly 80% of the deaths caused by chronic diseases occur in middle- and low-income countries. It is estimated that over 49% of the U.S. population will be affected by chronic diseases by 2025. Cardiac diseases and stroke account for 30% of the deaths in the U.S. Cardiovascular diseases are the leading cause of death globally. Stroke is the second most common cause of death worldwide. According to the WHO, it is estimated that by 2022, chronic diseases will account for 3/4th of the total deaths globally, out of which 71% will be caused by ischemic heart diseases and 75% of deaths will be caused by stroke. 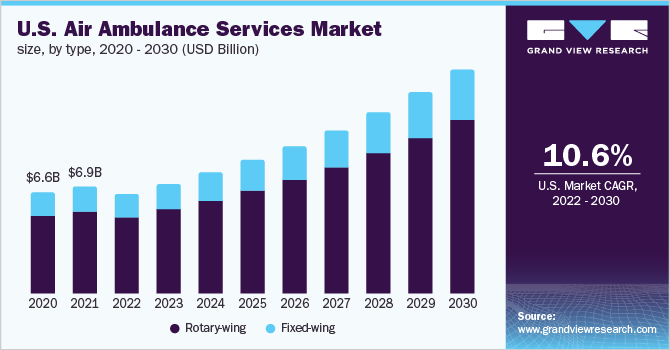 The presence of a large population pool over 60 years, which typically has a lower immunity level and is prone to neurological diseases, cardiac problems, cancer, and spinal injuries, is expected to be a high impact-rendering driver for the growth of the market during the forecast period. As per the WHO, globally, the number of people aged 65 or older is anticipated to grow from an estimated 524 million in 2010 to nearly 1.5 billion in 2050. The geriatric population is highly susceptible to diseases such as arthritis, heart attacks, stroke, osteoporosis, and obesity. Patients suffering from such diseases may require an emergency as well as a non-emergency ambulance service model. Hence, the increasing geriatric population is likely to result in the growth of the air ambulance services demand.

The COVID-19 pandemic had a positive impact on the air ambulance market. This can be accredited to an increase in demand for air ambulances over the pandemic duration. For instance, the International Critical Care Air Transfer Team (ICATT), a Bengaluru-based air ambulance service firm, witnessed a 500% increase in demand during the pandemic period. Before the pandemic, ICATT used to transfer 15 to 20 critically ill patients in a month, which surged to around 300 patients a month. A similar rise in demand was seen globally. Moreover, in order to deal with the rising demand, many market players underwent several strategic changes. For instance, Air Ambulance Kent Surrey Sussex formed a designated critical care transfer team. Furthermore, it was one of the first civilian air ambulances in the U.K. to move ventilated & critical COVID-19 patients via air.

The European Air Ambulance (EAA), one of the largest air ambulance providers in Europe, created an ‘Infectious Disease Unit’ for the safe transport of COVID-19 patients. Additionally, the EAA invested in Challenger-605, an aircraft that is large and can fly for long ranges. Furthermore, in October 2020, the company introduced transport procedures for COVID-19 patients, to curb the spread of coronavirus. The company also adopted the use of the IsoPod, known as the infectious disease unit, which provides the patient room to roam around, permits less-intensive treatment, and keeps them totally segregated from a non-infected environment.

The term rotary-wing is generally used for a helicopter. Rotary-wing service model held the largest share in the market in 2021. The key advantages of helicopter-based air ambulance services are cost-effectiveness and quick response time. Helicopters serve patients in emergencies, especially when a quick response time is expected. Helicopters are a good substitute for ground ambulances as they can land almost anywhere, including roads, parks, fields, cramped urban areas, and paved areas. However, due to low fuel capacity, they have a short operating range.

The helicopter-based air ambulances can be used in a wide range of situations mainly dealing with emergency response. Hospitals use rotary-wing air ambulance services to transport the medical team to a patient’s location and then escort them back to the hospital. Commonly used helicopters for air ambulance services are Bell 206, 429, & 407; Eurocopter AS350, EC135, BK117, EC145, & EC130; Sikorsky S-76; and Augusta Westland 149 & 109. Some of the key players operating in this market segment are REVA Inc., PHI, AirMed International, Scandinavian Air Ambulance, and Native American Air Ambulance.

Fixed-wing air ambulances can travel long distances as they have better fuel capacity as compared to rotary-wing aircraft. Aircraft with propellers are mostly used for short distances. Some propeller-driven aircraft are also known as turboprops and are sometimes used for long-distance and/or outstation travel. Business jets are used for longer-distance service models and are capable of carrying more medical equipment and personnel as compared to helicopters.

Moreover, fixed-wing aircraft can operate in unpleasant weather conditions without compromising patients’ comfort and quality of care. The ability to operate in adverse weather conditions and a rise in medical tourism are two main reasons that can be attributed to the increase in demand for fixed-wing air ambulance services. The use of a turboprop or a jet is based on the parameters of transport. Some commonly used fixed-wing air ambulances are Learjet 31, 35, & 36; King Air 200, 90; Pilatus PC-12; and Piper Cheyenne. REVA Inc., PHI Air Medical, AirMed International, Scandinavian Air Ambulance, and Native American Air Ambulance are some of the key players operating in this market segment.

The hospital-based segment held the largest share in 2021 and is anticipated to witness a considerable growth rate during the forecast period. In a hospital-based service model, a hospital generally provides the medical team and partners with an aviation service provider for aircraft, pilots, and mechanics.

An aviation service provider is required to have a Federal Aviation Administration (FAA) certificate and is paid by the hospital for the service model offered. Hospital-based service model holds the largest share in the air ambulance market. The first hospital-based helicopter service for civilians started in 1972, and currently around half a million rotary- and fixed-wing aircraft operate annually. The lack of specialty care and medical physicists in some regions has led to an increase in the use of air ambulance services to rapidly transfer patients to specialty hospitals. 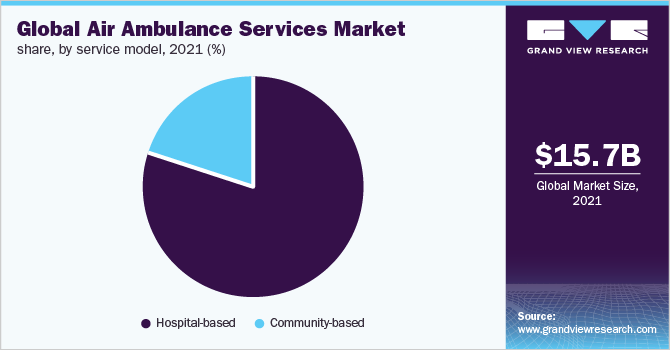 North America dominated the market in 2021 and is expected to witness a considerable growth rate of 10.8% during the forecast period. North America has the largest number of air ambulance service providers, and the infrastructure required for air medical transportation is also easily accessible. In addition, the presence of favorable reimbursement policies also supports the growth of this region. Moreover, the presence of a highly developed healthcare infrastructure is also expected to drive market growth in the forthcoming years. 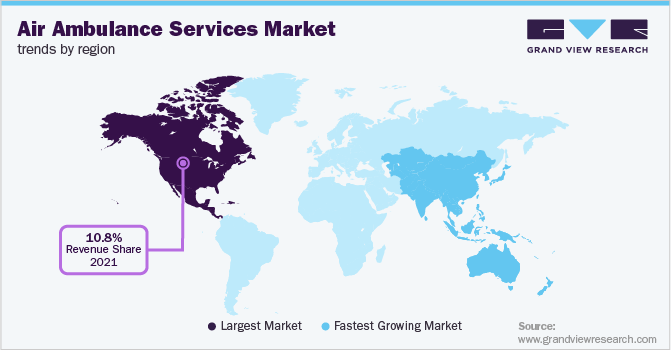 The Asia Pacific market is anticipated to witness the fastest growth during the forecast period. The presence of developing countries such as China, India, and Japan is anticipated to boost the market growth in the Asia Pacific region. In addition, the rapidly growing medical tourism industry in these countries can also be attributed to the increase in demand for air ambulance services in this region. For instance, as per data in Financial Express, between 2017 and 2019, India experienced over 40% growth in FTAs, with the number of tourists increasing from 495,056 in 2017 to 697,000 in 2019.

Key players are involved in adopting strategies such as mergers & acquisitions, partnerships, and launching new services to strengthen their foothold in the market. For instance, in Feb 2020, Bombardier announced the sale of two Learjet 75 Liberty aircraft to North Dakota-based Fargo Jet Center (FJC). These aircraft were to be converted to a dedicated medevac configuration and delivered to air ambulance service provider Lotnicze Pogotowie Ratunkowe (LPR), based in Warsaw, Poland. Similarly, in April 2021, Babcock Norway was awarded a new contract to provide a round-the-clock fast jet air ambulance service to the rescEU scheme. The new contract will see Babcock provide a fast jet air ambulance capability across the EU including aircraft maintenance, the provision of personnel, and their training. Some prominent players in the global air ambulance services market include:

This report forecasts revenue growth at global, regional, and country levels and provides an analysis of the latest industry trends in each of the sub-segments from 2018 to 2030. For this study, Grand View Research has segmented the global air ambulance services market report based on type, service model, and region: 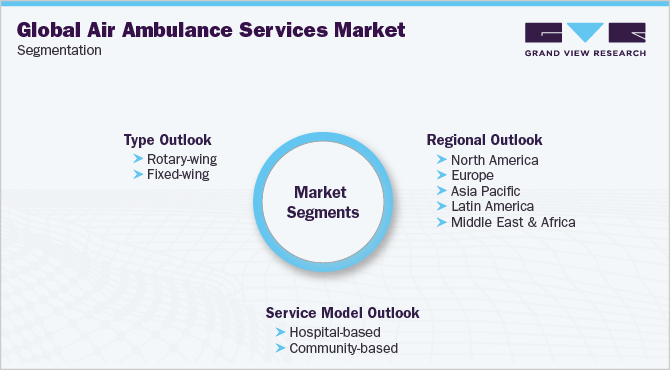 How big is the air ambulance services market?

What is the air ambulance services market growth?

b. The hospital-based segment dominated the market for air ambulance services and held the largest revenue share of 79.85% in 2021, and is anticipated to witness a considerable growth rate over the forecast period.

Which region accounted for the largest share in the air ambulance services market?

b. North America dominated the air ambulance services market and accounted for the largest revenue share of 49.47% in 2021. The region is expected to witness a considerable growth rate of 10.8% over the forecast period.

Which type of air ambulance service accounted for the largest market share?

b. The rotary-wing segment dominated the market for air ambulance services and held the largest revenue share of 76.77% in 2021.

What are the factors driving the air ambulance services market?