The global air sports equipment market size was valued at USD 14.9 billion in 2018. The increasing popularity of adventure sports among millennials is expected to be a key factor over the forecast period. Moreover, rising participation in outdoor recreational activities across the globe is boosting the demand for the air sports equipment used in various sports including parachuting, paragliding, wingsuit flying, and ziplining.

Over the past few years, the popularity of extreme sports has grown exponentially owing to changing perception of millennials, college grads, working professionals, and some older adults towards participating in adventurous sports in order to experience thrill and joy. In addition, social media, movies, and cinemas have played an important role in promoting these extreme sports across the globe. Participation of customers of different age groups in various outdoor recreational activities has increased significantly in the past few years. 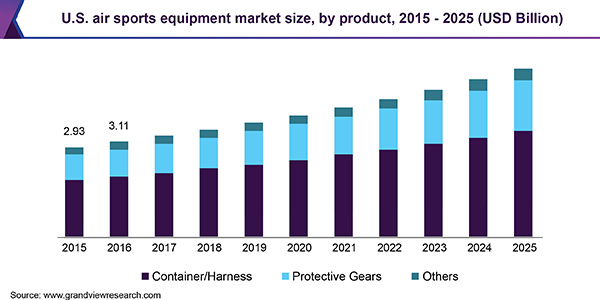 According to ‘The Outdoor Participation Report’ published by the Outdoor Industry Association, in 2017, around 48.8% of the U.S. population which is 144.4 million people participated in an outdoor activity at least once 2016. People are also adopting these outdoor activities in order to regain their physical as well as mental health in this hectic lifestyle. In addition, parachuting has become safer with advanced air sports equipment and better training. For instance, according to the data provided by the United States Parachute Association (USPA), in 2018, the fatality rate was 0.0039 per 1,000 Jumps. These statistics promote air sports and thus, in turn, will promote the demand for various air sports equipment over the forecast period.

Government organizations are increasing spending on the development of various skydiving facilities in order to cater to the increasing demand for air sports activities. This, in turn, is increasing the need for sports equipment. According to United States Parachute Association (USPA), there were around 220 USPA Group Member ‘drop zones’ or skydiving centers across major cities in the U.S. in 2017. In addition, in May 2016, Skydive Qatar, one of the prominent companies for skydiving sport, increased its operation days to six days a week, previously it was four days a week. The company took this step as the popularity of skydiving is souring among amateurs. These consumer trends are anticipated to boost the demand for air sports equipment over the forecast period.

Container/Harness was the largest product segment with a share of more than 60.0% in 2018 and is expected to maintain its lead over the forecast period. The harness is the most important piece of equipment used in every air sport including ziplining, parachuting, paragliding, wingsuit flying, and canopy piloting. Over the past few years, the skydivers reported injuries due to equipment failure and improper landing techniques. According to the United States Parachute Association (USPA), in 2018, the total number of injuries reported was 2,147 among the USPA members in the U.S. The national government as well as skydiving schools are focusing on the utilization of advanced equipment and the best training module in order to make air sports safer.

The protective gears segment is expected to expand at the fastest CAGR of 7.0% from 2019 to 2025. The air sports equipment industry participants are coming up with advanced high-end sports gear with the inclusion of features, which are linked with human biomechanics. For instance, in August 2018, LA POINTIQUE INT'L LTD. showcased high-end sports gear products including AIR SERIES Compression Gear, ACE SERIES Compression Gear, and XT SERIES high-end protective wear.

Parachuting was the largest application segment with a share of more than 40.0% in 2018. Over the past couple of decades, this air sport has gained popularity owing to the availability of safer equipment, coupled with ease of access to the sport among adults. According to the statistics provided by the United States Parachute Association (USPA), in 2010, the estimated annual jump in the U.S. alone was 3 million, which increased to 3.3 million in 2018. In addition, according to the USPA, out of the total jumpers, 11.18% of them were retired by occupation. This significant increase in participation is expected to expand the scope for parachuting over the foreseeable future, thereby driving the demand for sports equipment. 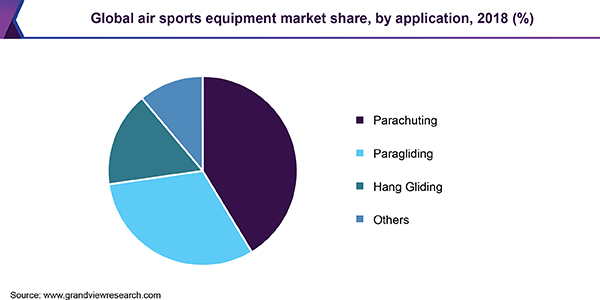 Paragliding is anticipated to be the fastest-growing segment with a CAGR of 7.2% from 2019 to 2025. Paragliding is gaining popularity owing to its ease of operation, along with its utilization during both winter and summer seasons. Easy launching and easy landing are some of the key attributes of the paragliding activities as compared to other air sports including hang gliding and wingsuit flying, which will have a positive impact on the industry growth.

Europe was the largest air sports equipment market, accounting for a share of more than 35.0% in 2018 owing to the presence of a large number of hills and mountains in the region. Switzerland, Spain, U.K., France, Italy, and Hungary are some of the prominent countries in Europe with the highest penetration of the air sports market, thereby driving the demand for equipment. These countries are anticipated to uphold their market dominance and witness high growth over the forecast period.

Europe is hosting several sports events, which will fuel the market growth over the forecast period. For instance, in July 2019, Ukraine hosted Carpathian Cup and in August 2019, the ‘Russian Open’ was organized in Aksaray, Hasan Dagi, Turkey. These types of events are expected to play a crucial role in keeping the strong visibility of air sports in the region, and thus, in turn, will prompt the use of various air sports equipment.

The global market is consolidated in nature owing to the presence of strong players in Europe and North America. Moreover, some of the prominent players including Velocity Sports Equipment, Flyneo.com, Aerodyne Research, LLC, OZONE POWER LTD, and SUP’AIR are offering cutting-edge technological equipment in order to meet the safety requirement as per the government regulations as well as to cater to rising demand for air sports equipment.

In addition, major manufacturers are adopting various market tactics including product launches, expansion of their R&D, and formation of alliances with key distributors in order to gain the maximum customer base. For instance, in October 2018, SUP’AIR launched an advanced harness under the brand name ‘Skipper 2’. The equipment is designed to offer great passive safety, comfort, and steering precision.

This report forecasts revenue growth at the global, regional, and country levels and provides an analysis of the latest industry trends in each of the sub-segments from 2015 to 2025. For the purpose of this study, Grand View Research has segmented the global air sports equipment market report on the basis of product, application, and region: