The global anastomosis devices market size was valued at USD 15.74 million in 2016. It is anticipated to expand at a CAGR of 5.2% over the forecast period. Rising surgical procedures along with growing incidence of cardiovascular and gastrointestinal diseases are the key trends escalating market growth.

According to statistics published by Medistim, on an average, more than 700,000 coronary artery bypass graft (CABG) and 600,000 vascular procedures are performed every year globally. According to HonorHealth, nearly 500,000 CABG procedures are performed every year in the U.S., making it one of the nation's most common major operations, thereby fuelling the demand for anastomotic devices.

Introduction of technologically advanced products providing better patient outcome is another factor driving the market. Some of the potential benefits of these products include reduced chances of vessel leakage, stenosis, and occlusion. Anastomosis performed using this device is 50% stronger than sutures, preventing vessel collapse and assuring patency.

Anastomosis devices are helpful in simplifying anastomosis procedure and minimizing surgery time. The aforementioned benefits are expected to provide a significant boost to the market worldwide.

The disposable segment held the largest revenue share in the market in 2016, owing to the availability of an array of disposable anastomotic products and greater market penetration. Majority of key players are involved in the production of disposable type of products.

These products reduce the risk of surgical site infections (SSI), cross-contamination, and other healthcare-associated infections (HAI). Another advantage of disposable anastomotic devices over reusable ones is that they do not require reprocessing between consecutive uses, thereby reducing reprocessing cost and speeding up the entire process. This segment is poised to post a healthy growth rate owing to the aforementioned benefits.

Reusable anastomotic device is an emerging segment. It is likely to rise at a lucrative rate over the forecast period, owing to the development of technologically advanced products and rising need to reduce biomedical waste.

Certain single-use/disposable products are associated with high production cost, which consequently increases the selling price of these instruments. Adoption of reusable items could be an effective way of curbing higher prices. Moreover, cost of reprocessing and decontamination of reusable products is less as compared to the production of disposable anastomotic devices. Owing to the aforementioned factors, the segment is estimated to register the highest CAGR during the forecast period.

Cardiovascular surgery was the most prominent application segment in 2016. According to WHO, 17.7 million people died from CVD in 2015, which represented 31.0% of all deaths in the world. Rising prevalence of CVD is contributing to the increase in the number of heart surgeries such as CABG (coronary bypass graft surgery).

According to the article “CABG Versus PCI” published by NCBI in 2015, CABG procedures have an overall survival benefit and better patient outcome as compared to percutaneous coronary intervention (PCI) and treatment with drug-eluting stents in individuals affected by multivessel coronary artery disease. Hence, surgery is crucial for the treatment of such life-threatening diseases, thereby increasing adoption of anastomosis devices in these surgeries. 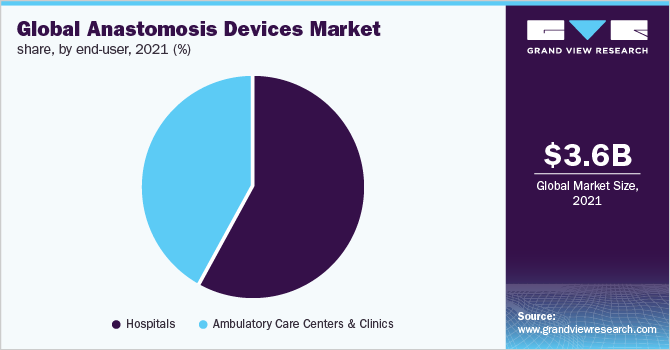 The gastrointestinal surgery segment, comprising colorectal surgeries and large bowel resections, is anticipated to witness tremendous growth over the forecast period, owing to the increasing prevalence of colorectal cancer and other gastrointestinal diseases, which require bowel resection. According to the Agency for Healthcare Research and Quality (AHRQ), around 320,000 colorectal surgeries and 460,000 cholecystectomy procedures are performed every year in the U.S.

Prevalence of colorectal cancer is increasing in Asia Pacific, owing to which the anastomosis devices market holds phenomenal potential in the region. For instance, according to estimates provided by the Center for Cancer Control and Information Services, National Cancer Center Japan, around 149,500 people were affected by colorectal cancer in 2017, making it the second most common cancer in Japan.

It also states that East Asian countries such as Japan, China, South Korea, and Singapore exhibited a two to four-fold increase in incidence over the last decade. Moreover, a large number of products for use in gastrointestinal anastomosis are expected to be introduced in the market over the forecast period, thereby providing lucrative growth platform to the market in near future.

North America accounted for the largest revenue share in 2016. Increasing prevalence of cardiovascular diseases and growing number of R&D collaborations carried out by major players in the region are projected to stimulate the growth of the region. For instance, in August 2016, Dextera Surgical Inc. entered into a joint development program with Intuitive Surgical, Inc. for developing a novel surgical stapler for the latter’s da Vinci Surgical System.

Furthermore, growing access to medical assistance, increasing awareness regarding CVD and CHD, rising disposable income, and highly established R&D infrastructure are key factors contributing to the growth of the regional market. Favorable healthcare reimbursement policies pertaining to CABG procedures, along with other factors mentioned, are poised to help the region maintain dominance until 2025. For instance, in 2016 Centers for Medicare & Medicaid Services (CMS) took steps to implement and grow mandatory bundled payments for CABG procedures in an attempt to increase quality, lower costs, and provide more care coordination among hospitals.

Asia Pacific is likely to register the highest CAGR over the forecast period. Japan, China, and India are the key contributors to the APAC market. The regional market is estimated to experience the fastest growth during the forecast period, owing to improving economic conditions, growing healthcare awareness, and increasing aging population in this region. Aged people are more susceptible to cardiovascular and gastrointestinal diseases, thereby presenting a huge target population for the industry.

Rising interest of companies to expand their presence in the region coupled with growing demand for anastomosis devices is anticipated to drive the market. Additionally, increasing research & development activities and soaring healthcare expenditure are working in favor of the regional market.

Anastomosis devices are classified as class II medical devices owing to which the regulatory framework is not very stringent. These devices require only the manufacturer’s declaration of device safety and effectiveness before the sale and are not subjected to in-depth regulatory scrutiny. As the entry barriers to this market are less, the threat of new entrants is high, which thereby leads to increased competition. As a result, competitive rivalry in the market is expected to remain high throughout the forecast period.

This report forecasts revenue growth at global, regional, & country levels and provides an analysis of the industry trends in each of the sub-segments from 2014 to 2025. For the purpose of this study, Grand View Research has segmented the global anastomosis devices market report on the basis of product type, application, and region:

How big is the anastomosis devices market?

What is the anastomosis devices market growth?

Which segment accounted for the largest anastomosis devices market share?

b. North America dominated the anastomosis devices market with a share of 40.71% in 2019. This is attributable to the increasing prevalence of cardiovascular diseases, growing access to medical assistance, increasing awareness regarding CVD and CHD, rising of disposable income and growing number of R&D collaborations carried out by major players.

Who are the key players in anastomosis devices market?

What are the factors driving the anastomosis devices market?

b. Key factors that are driving the anastomosis devices market growth include rising surgical procedures along with growing incidence of cardiovascular and gastrointestinal diseases, technologically advanced products, presence of supportive regulatory framework and increasing reimbursement coverage.