The global coronary artery bypass graft market size was valued at USD 77.3 million in 2016 and is expected to grow with a CAGR of 5.8% during the forecast period. Rise in prevalence of cardiovascular diseases such as Coronary Artery Disease (CAD) or Coronary Heart disease (CHD), Myocardial Infarction (MI), hypertension, and peripheral vascular disease, and introduction of technologically advanced products are the key drivers expected to nurture market growth worldwide.

Sedentary lifestyle, mental stress, and consumption of junk food are the key reasons for developing Cardiovascular Diseases (CVDs) in individuals around the globe. According to the World Health Organization, CVDs contribute to the maximum number of deaths globally. In 2012, nearly 17.5 million deaths were reported due to CVDs, representing 31.0% of the global death statistics. Out of the 17.5 million deaths reported, 7.4 million were owing to CHD, and 6.7 million were due to stroke. The number of deaths is anticipated to reach over 23.6 million by 2030.

The globally growing geriatric population is anticipated to be a vital driver to increasing coronary artery bypass graft surgeries and is expected to bolster the growth of this vertical over the forecast period. According to the American Heart Association (AHA) estimates, the global geriatric population is anticipated to account for approximately 20.0% of the total population by 2030. In addition, as per the statistics published by the AHA, in 2012, the number of CABG surgeries performed in the U.S. was 519,000, out of which 371,000 were performed on men and 148,000 on women. In addition, the estimates state that the number of CABG surgeries performed worldwide is more than 800,000 every year. The introduction of technologically advanced products such as Minimally Invasive Direct Coronary Artery Bypass (MIDCAB) or keyhole, Anastomosis Assist Devices (AAD), and Endoscopic Vessel Harvesting (EVH) devices are expected to propel the demand for CABG surgeries over the forecast period. MIDCAB is a less invasive method of CABG, which gains surgical access to the heart with a smaller incision. MIDCAB is off-pump technology and performed without using the heart-lung machine. MIDCAB offers benefits such as faster recovery from the disease, low bleeding & blood trauma, lower infection rate, and affordable surgery cost.

The key type segments analyzed in the market are saphenous vein grafts, internal thoracic artery grafts, and other grafts. The saphenous vein graft segment dominated the industry in 2016 and is expected to witness lucrative growth over the forecast period. Increasing preference for the Saphenous Vein Graft (SVG) over other vein grafts owing to various advantages such as being longer in length, ease in handling, and less transfusion requirement have supported the coronary artery bypass graft market growth.

The other graft segment is further segmented into the radial artery and gastroepiploic artery. The Right Gastroepiploic Artery (RGEA) is a suitable and alternative conduit for coronary bypass surgery and is specifically used in patients who do not have appropriate saphenous veins to harvest for grafts.

The surgical procedure segment includes single, double, triple, and quadrupole CABG surgeries. The triple bypass surgeries segment is expected to dominate this industry due to the rising prevalence of CVDs such as CAD or CHD, MI, or strokes across the globe.

The number of double bypass surgeries is common and performed largely worldwide, hence the segment is expected to be the fastest and register a high CAGR comparatively, over the forecast period.

The on-pump CABG segment emerged as the largest segment in 2016. Rising preference for on-pump CABG procedures from cardiothoracic surgeons or cardiac surgeons coupled with the rising use of heart-lung machines, oxygenators, positioners, and stabilizers has assisted in the market growth. 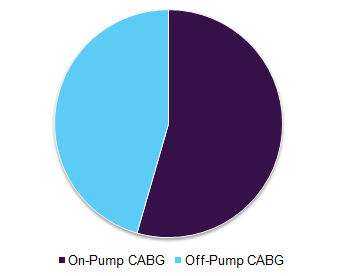 The conventional vessel harvesting segment is expected to dominate the market during the forecast period due to its higher usage in coronary artery bypass graft procedures. However, the segment is anticipated to lose market share in the near future owing to the emergence of the endoscopic vessel harvesting technique, as it minimizes scarring, morbidity, and infections associated with traditional longitudinal incisions resulting in providing improved outcomes.

The EVH segment is expected to gain the market share over the forecast period as it eliminates the requirement for long incisions associated with open (conventional) harvesting, resulting in reducing the risk of wound infection and other complications, minimizing postoperative pain, and increasing patient satisfaction level.

North America held around 56.9% share in the CABG market in 2016 owing to the increasing prevalence of CVDs, the presence of the target population, and the changing lifestyle of individuals in the U.S. and Canada.

Asia Pacific also held a substantial market share in 2016 due to the rising number of CABG surgeries in India & Japan coupled with a growing population, and increasing patient awareness about the diseases. Europe is anticipated to register a high CAGR comparatively over the forecast period, owing to the large number of CABG surgeries being performed in the region.

This report forecasts revenue growth and provides an analysis on the latest trends in each of the sub-segments from 2014 to 2025. For the purpose of this study, Grand View Research, Inc. has segmented the global coronary artery bypass graft market on the basis of type, surgical procedure, technology, technique, and region:

What are the factors driving the coronary artery bypass graft market?

b. Key factors that are driving the artery bypass graft market growth include a rise in the prevalence of cardiovascular diseases such as Coronary Artery Disease (CAD) or Coronary Heart disease (CHD), Myocardial Infarction (MI), hypertension, and peripheral vascular disease, and the introduction of technologically advanced products.

How big is the coronary artery bypass graft market?

b. The global coronary artery bypass graft market size was estimated at USD 16.3 billion in 2019 and is expected to reach USD 16.5 billion in 2020.

What is the coronary artery bypass graft market growth?

b. Saphenous vein grafts dominated the coronary artery bypass graft market with a share of 40.9% in 2019. This is attributable to increasing preference for the Saphenous Vein Graft (SVG) over other vein grafts owing to various advantages such as being longer in length, ease in handling, and less transfusion requirement.

Who are the key players in coronary artery bypass graft market?