The global angioplasty balloons market size was valued at USD 2.2 billion in 2017 and is anticipated to grow at CAGR of around 3.3 % over the forecast period. This growth is attributed to technological advancements and rising angioplasty procedures being performed due to the minimally invasive nature of the surgery. Peripheral and coronary artery diseases are common signs of atherosclerosis and may lead to stroke, myocardial infarction, and/or cardiovascular death.

Increasing incidence of these diseases is likely to boost the market growth in the coming years. For instance, according to the WHO, in 2016, around 18 million deaths occurred due to Cardiovascular Diseases (CVDs), which accounts for 31% of deaths globally. Increasing target population base across the globe is also expected to drive the market. Furthermore, Development in the imaging technologies and advent of advanced products is expected to boost the market growth during the forecast period. 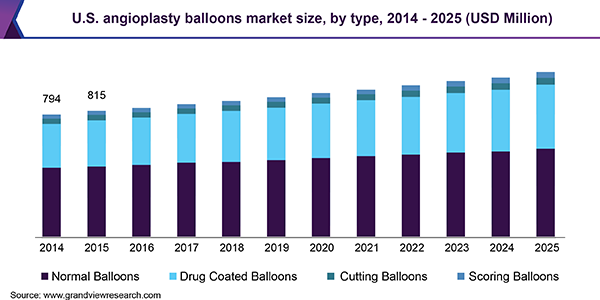 For instance, in 2014, Medtronic PLC received an FDA approval for its drug-coated balloon IN.PACT Admiral for the treatment of peripheral artery disease. The company also received product approval from Japanese Ministry of Health, Labor and Welfare for the treatment of peripheral artery disease in the upper leg. Approval and commercialization of cutting and scoring balloons, such as AngioSculpt, are likely to drive the market further.

In addition, quick adoption of advanced technologies, especially in the developed, in the angioplasty segment, such as drug-eluting and cutting balloons, is a major factor anticipated to propel the market growth over the forecast period. Moreover, the success rate of angioplasty balloon is higher than traditional angioplasty techniques, which is also likely to spur market growth.

Normal balloons segment led the market in 2017 due to the low cost of these devices, supportive government regulations and submission processes for approval, and favorable reimbursement policies. Drug-Eluting Balloons (DEBs) is anticipated to be the fastest-growing type segment. Favorable reimbursement led to an increased sales of DEBs in 2017 and is estimated to maintain the trend during the forecast years.

This growth is attributed to the introduction of new products in the market, advantages of DEBs over the standard balloon, and low cost as compared to stents. Adoption of specialty products, such as scoring and cutting balloons, and R&D investments by major firms are likely to drive the demand further. Specialty balloons, such as AngioSculpt and Flextome, received marketing authorization from U.S., Europe, Japan, and other major regions. Hence, the availability of products in key markets is projected to boost their share in the coming years.

On the basis of application, the market has been segmented into coronary and peripheral vascular diseases. In 2017, coronary segment led the market due to high incidence of coronary artery diseases, which are the most common type of all heart diseases. As stated by the CDC, over 370,000 deaths occur due to these diseases. Peripheral vascular diseases is anticipated to be the fastest-growing segment in the next few years due to rising number of approvals for novel products in recent years. Moreover, rising awareness about diseases related to peripheral arteries and availability of advanced products are likely to drive the segment further.

On the basis of end use, the global angioplasty balloon market has been segmented into Ambulatory Surgery Centers (ASCs), hospitals, and catheterization laboratories (Cath labs). The ASCs accounted for the largest share in 2017 due to huge demand for the treatments in these settings. This can be attributed to the availability of advanced services and minimum hospital stay requirements. In addition, treatments performed in ASCs are cost-effective, which helps cut down on overall medical expenses. This is also contributing to the segment growth. 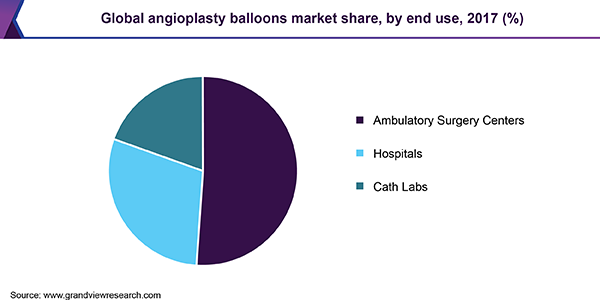 Furthermore, private and public hospitals along with the Catheterization Laboratories (Cath Labs) are significantly contributing to the industry growth. Hospitals accounted for the second-highest share of the global market in 2017. The segment is projected to expand further in future as these healthcare settings provide patient care during and after the treatment.

In 2017, North America accounted for the maximum revenue share. The local presence of key industry players, the change in U.S. FDA policy, and growing number of percutaneous coronary interventions are the primary drivers of the region. Asia Pacific is expected to be the most lucrative regional market on account of growing healthcare expenditure and positive government support.

In addition, increased investments by major market players in the region are estimated to augment the market during the forecast years. For instance, in November 2016, Cardinal Health signed an agreement with Kaneka. Through this agreement, the company acquired distribution rights to Kaneka's PTCA balloon catheters in the Middle East and Africa (MEA), Europe, Latin America (LATAM), and Asia Pacific regions.

This report forecasts revenue and volume growth at global, regional, and country levels and provides an analysis of the latest industry trends in each of the sub-segments from 2014 to 2025. For the purpose of this study, Grand View Research has segmented the global angioplasty balloons market report on the basis of type, application, end use, and region: