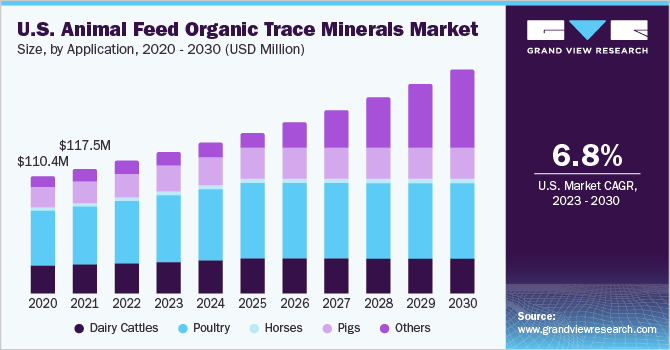 Trace minerals are essential minerals found in minute amounts in animal feed and are connected with organic molecules, such as polysaccharides and amino acids. Organic trace minerals find applications in various end-use industries, including poultry, dairy cattle, horses, and pigs.

In North America, the U.S. is the dominant market and contributes significantly to global revenue. The U.S. being a developed market is expected to expand at a CAGR of 6.8% from 2022 to 2030. The increase in meat consumption is one of the key factors driving the market. The market in the country is expected to grow at a significant rate due to a shift in food consumption patterns and the preference for animal protein consumption, especially broilers and turkeys.

Zinc held the largest revenue share of over 30.0% in 2021. Zinc is one of the essential minerals. It improves the immunity of animals and increases metabolism. Some of the essential minerals included in livestock feed are zinc, copper, iron, selenium, and others including manganese and cobalt. Growing demand for animal fodder globally is expected to drive the market for animal feed organic trace minerals.

Iron accounted for the second-largest revenue share in 2021. Similar to zinc, it is considered one of the essential nutrients in animal feed. Its major functions include transportation of oxygen in the blood, storage of oxygen in muscles and tissues of animals, and oxidation of nutrients. Iron deficiency results in an imbalance in tissue metabolism and can also lead to anemia. Growing awareness regarding the benefits of this essential micronutrient in animal feed is expected to boost its demand over the forecast period.

Copper is essential in regulating blood cell functions and maintaining healthy nerve fibers in animals. Besides, it strengthens the bones of animals. However, over-consumption of copper results in toxicity. This has led to establishing certain guidelines among governing bodies in order to restrict the use of copper in livestock food.

Selenium, in its organic form, is known as selenomethionine, which is used as a trace mineral in the preparation of cattle fodder. Selenium is important in maintaining the fertility of the breeding stock. The deficiency of selenium can result in white muscle disease, which is characterized by heart failure, no weight gain, weakness, and eventually, death. The Food and Drug Administration (FDA) has regulated this mineral as a feed additive.

In 2021, the poultry segment accounted for the largest revenue share of over 40.0%. Poultry is the most consumed meat in the world. Chicken, eggs, and turkeys are the most common meat sources in this segment. Growing demand for animal protein sources has driven the market for poultry over the years. Growing market in countries such as China and the U.S. has played a key role in this revival. This has driven the demand for animal feed and hence, organic trace minerals. Animal feed organic trace minerals are used for dairy cattle, poultry, horses, pigs, and other animals. Other applications include aqua food and pet food.

Pork is the second-highest consumed meat in the world, after poultry. It is considered a rich source of protein. Growing demand for high-quality pork and growing pork consumption have been major drivers of pork feed over the years. Pork is widely consumed in European and Asia Pacific countries as it is also considered an important source of protein. The outbreak of diseases in this sector is a common phenomenon, which has made the manufacturers and pork processors equally aware of the importance of high-quality feed including trace minerals and other nutrients. Growing demand from countries such as China and the U.S. has played a key role in the growth of the industry in this segment. The product also finds applications in other industries including horses, pet food, and aqua feed.

Dairy cattle emerged as the third-largest application segment in 2021. Increasing demand for cattle protein will drive the market over the forecast period. New technologies and systematic supply chain management have driven the global dairy business. Increasing demand for milk products such as yogurt, butter, ice cream, and cheese has also supported the growth of the dairy industry.

Asia Pacific held the largest revenue share of over 35.0% in 2021. The region is driven by China, which was the largest manufacturer of livestock feed in the same year. The considerable demand for organic trace minerals in animal feed stems from the poultry and swine industries. The presence of a large number of manufacturing bases aids in increasing the market demand over the forecast period. Furthermore, developments in the processing and retailing industries, a rise in poultry consumption per capita, and improving infrastructure have increased the demand for organic trace minerals in poultry farming. 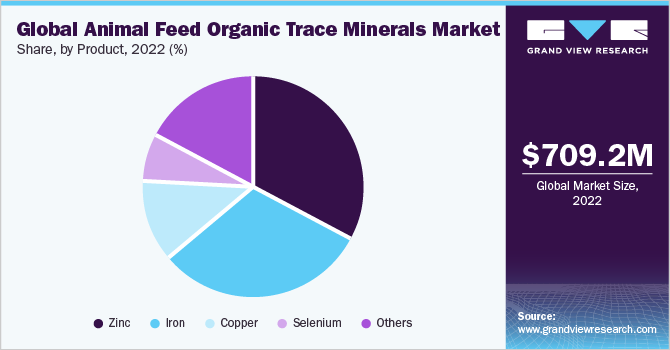 North America is expected to register a CAGR of 6.6% from 2022 to 2030. Major producers of organic trace minerals, including Archer Daniels Midland Co.; Alltech; and Cargill, Inc., are concentrated in this region. One of the main drivers of the animal feed business in this region is the expanding demand for meat, which, in turn, raises the need for organic trace minerals.

The market is very competitive and has become fragmented due to the presence of several companies. Numerous international companies are present in the market, and they are actively engaged in acquisitions, mergers, geographical expansion, and product development to derive profit and enhance their market share. Some prominent players in the global animal feed organic trace minerals market include:

This report forecasts revenue growth at the global, regional, and country levels and provides an analysis of the latest industry trends and opportunities in each of the sub-segments from 2018 to 2030. For the purpose of this study, Grand View Research has segmented the global animal feed organic trace mineral market report on the basis of product, application, and region: 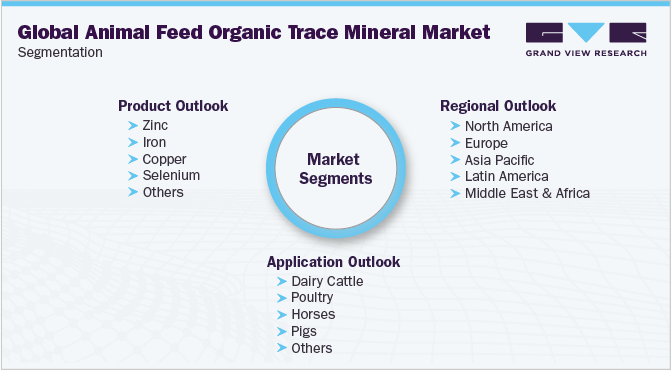 How big is the animal feed organic trace minerals market?

What is the animal feed organic trace minerals market growth?

b. Zinc is one of the essential minerals. It improves the immunity of animals and increases metabolism. Iron accounted for the second-largest share of the market in 2021 with 30.6%.

Who are the key players in animal feed organic trace minerals market?

What are the factors driving the animal feed organic trace minerals market?

b. Key factors that are driving the market growth include increasing awareness regarding the harmful effects of consuming inorganic trace minerals containing heavy metal contaminants.