The global amino acids market size was valued at USD 26.1 billion in 2021 and is expected to expand at a compound annual growth rate (CAGR) of 7.4% during the forecast period of 2022 to 2030. The market is anticipated to be driven by the increasing demand for amino acids from the food, pharmaceutical, and nutraceutical industries. The product is widely being used in dietary supplements owing to its ability to treat muscle soreness, sprain, and mental fatigue. 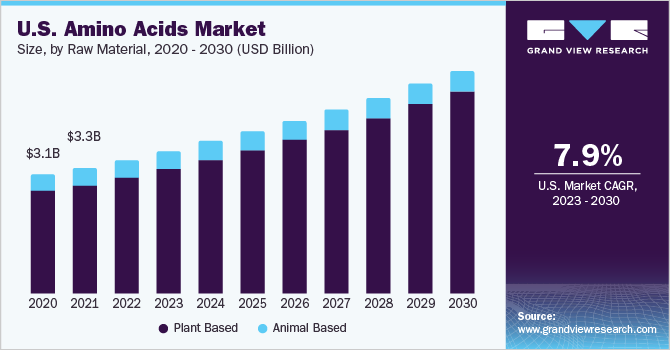 With the emergence of the COVID-19 pandemic, the amino acids industry faced a few challenges as the imposed lockdown on manufacturing industries resulted in supply chain disruptions. This in turn resulted in a supply and demand volatility of the amino acid products. However, with the spread of the virus, the shift of people towards immunity-boosting products increased during the period, thus driving the demand for amino acid-based products.

Amino acids can be synthesized via protein hydrolysis, chemical synthesis, or microbiological (biotechnological) methods. The choice of method depends on the available technology, cost of raw materials, market characteristics, cost of running fermentation versus synthesis reactions, and the environmental impact of the method itself.

The rising demand for dietary supplements, along with bolstering expansion of the healthcare industry in countries such as India, China, Mexico, and the U.S., is expected to propel the product demand in the long run. Among different types of amino acids, lysine and valine are gaining significant traction among end-users.

The plant-based raw material segment accounted for the largest revenue share of 86.0% in 2021 and is expected to witness the fastest growth during the forecast period, owing to the rising consumer preference for naturally sourced products. Plant sources include soybean, wheat, corn, potato, and peas. Currently, soybean is used for commercial development of the product on account of its high consumption and large-scale production. However, soybean processing is known to alter the amino acid composition, which proves to be a major concern for sourcing raw material.

Lysine being an essential amino acid has witnessed remarkable growth in the recent past. As the human body cannot synthesize such an acid, its demand is moderately driven by the growth of the dietary supplements market. Apart from human consumption, the product has gained popularity as an animal feed additive.

It is mainly used for body protein deposition and the amount of lysine ingested every day directly influences animal growth performance. Modifying the dietary lysine concentration according to the feed intake capacity optimizes animal growth, feed quality, and efficiency. Growing product demand from animal feed manufacturing companies, along with increasing consumption of dietary supplement formulations, is expected to augment the lysine demand during the projected period.

L-glutamate accounted for the largest volume share of 47.5% in 2021 and is anticipated to maintain its lead over the forecast period. L-glutamate, also known as l-glutamic acid, is a non-essential amino acid. It is extensively used as a nutritional supplement, flavor enhancer, feed additive, and intermediate for manufacturing organic chemicals. In the food and beverage sector, the sodium salt of l-glutamate, namely monosodium glutamate (MSG), also known as seasoning salt, is commercially used to improve food palatability.

Increasing demand for processed food products, along with growing product penetration in animal feed, is projected to drive the product demand in the amino acids market during the forecast period. Lysine being an essential amino acid has witnessed remarkable demand growth in the recent past. As the human body cannot synthesize such acid, its demand is moderately driven by the growth of the dietary supplements market. Apart from human consumption, the product has gained popularity as an animal feed additive.

It is mainly used for body protein deposition and the amount of lysine ingested every day directly influences animal growth performance. Modifying the dietary lysine concentration according to the feed intake capacity optimizes animal growth, feed quality, and efficiency. Growing product demand from animal feed manufacturing companies, along with increasing consumption of dietary supplement formulations, is expected to augment the lysine demand during the forecast period.

The poultry segment accounted for the largest revenue share of 41.8% in 2021 and is expected to witness the fastest growth during the forecast period. The poultry segment consists of chicken, duck, turkey, and broilers. Rising demand for chicken and broiler meat in countries such as the U.S., Russia, and Mexico, is expected to drive the poultry feed market, giving rise to higher consumption of feed additives, including amino acids such as lysine and arginine.

The increasing number of fast-food chains and growing demand for processed food in the Asia Pacific and North America are driving the demand for poultry products in these regions. This has resulted in an upsurge in poultry farming activities, which, in turn, is driving the demand for poultry feed. However, the recent COVID-19 outbreak has resulted in a worldwide shutdown, which has created volatility in the availability and supply of poultry products.

The food and dietary supplements application accounted for the largest segment volume share of 56.1% in 2021 and is anticipated to maintain its lead during the forecast period. Amino acids are used in the food processing industry as flavor enhancers, preservatives, and nutrition enhancers. Glycine and alanine are commonly used as flavor and taste enhancers.

Monosodium glutamate (MSG), a derivative of glutamic acid, is widely used as a flavor enhancer in canned vegetables, soups, processed meat, salad dressings, bread, carbohydrate-based snacks, and ice cream. It is regulated by the U.S. Food and Drug Administration (FDA) as GRAS (Generally Recognized as Safe). The product is popular among Asian countries and is widely used in several food preparations. 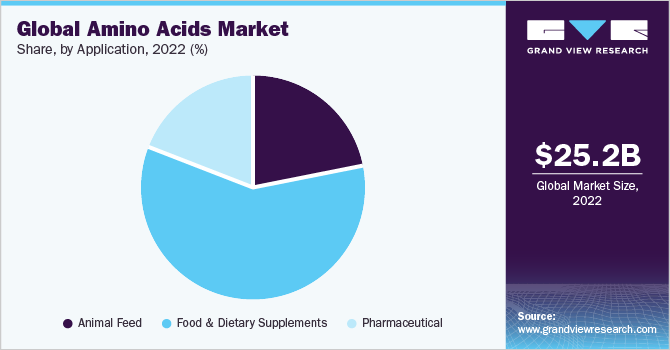 The animal feed segment is expected to witness the fastest growth in the market during the forecast period. Amino acids are used as additives in animal feed formulations to promote growth performance, and reproduction, and to fulfill the protein requirement in animals. Supplementation with amino acids promotes feed conversion efficiency, thereby lowering feed costs per unit of weight gain of production. In addition, the amino acid requirement varies from species to species and depends on the development stage of the animal.

For instance, in calves, the most vital amino acids required are isoleucine, lysine, methionine, leucine, and threonine. The deficiency in any of these amino acids slows down animal growth and delays the onset of maturity. In the growth stage of poultry animals, arginine is an essential part of their diets as it does not contain a urea cycle, which is responsible for synthesizing protein. Arginine deficiency in chicken often results in deformation. In addition, lysine deficiency can have a similar effect on turkeys.

Cystine is used in several beverages such as fruit juices as a preservative, whereas tryptophan and histidine are used as preservatives in milk powder. Phenylalanine and aspartic acid are used in combination to develop aspartame, which is gaining popularity as a sugar substitute in several soft drink formulations.

Asia Pacific led the market with a revenue share of 48.5% in 2021. The region is expected to witness the fastest revenue-based growth during the forecast period. This can be attributed to the increased consumer spending in the region, growing adoption of a healthy lifestyle, and rapid expansion of end-use industries, such as nutraceutical, pharmaceutical, personal care, and cosmetics.

The increasing production of amino acids in the region and growing exports of feed additives from key countries, such as China and Japan, is anticipated to contribute to the regional market growth. Amino acids are primarily used to treat liver and cardiovascular disorders and reduce muscle fatigue and breakdown. The burgeoning population in developing economies, such as China and India, along with the presence of a young age population, has resulted in high demand for amino acids in the above-mentioned countries.

European countries such as Germany, the U.K., France, and Italy have witnessed increased meat consumption over the past few years. The growing use of animal feed additives containing a proportionate amount of prominent amino acids, such as lysine, methionine, and threonine, for improving animal growth performance is expected to drive the regional market. Besides, rising demand for high-quality meat and meat products is anticipated to drive the feed additives market in the region, which, in turn, is expected to fuel the amino acid consumption in the feed industry.

However, the region has been severely impacted by the COVID-19 outbreak. In addition, Italy and the U.K. are the worst-hit countries, having witnessed the shutdown of several manufacturing companies. This is expected to severely impact the supply chain of feed additives, thereby adversely affecting the market growth in the region.

The market has been characterized by the presence of established players with large production capacities. With the augmented product demand, they are focusing on acquisitions, expansion, and investment strategies to enhance their product portfolio and meet the growing demand from end-use markets. In January 2022, the Leverkusen, Germany-based pharmaceutics company Bayer AG announced the launch of Ambition, an amino acid-based product specially made for the Chinese market. The product encompasses a total of 19 types of amino acids such as glutamic, alanine, and glycine acid. Some of the prominent players in the global amino acids market include:

This report forecasts revenue and volume growth at global, regional, and country levels and provides an analysis of the latest industry trends and opportunities in each of the sub-segments from 2016 to 2030. For the purpose of this study, Grand View Research has segmented the global amino acids market report on the basis of raw material, product, application, livestock, and region:

Who are the key players in amino acids market?

What are the factors driving the amino acids market?

b. Key factors that are driving the amino acid market growth include increasing demand from food, pharmaceutical, and nutraceutical industries. Amino acids are extensively used as an active ingredient in the animal feed industry to improve feed quality and animal health by enhancing feed efficiency,

How big is the amino acids market?

What is the amino acids market growth?

Which segment accounted for the largest amino acids market share?

b. food and dietary supplements applications accounted for the largest segment volume share of 56.1% in 2021. This is attributable to the rising usage of amino acids as flavor enhancers, preservatives, and nutrition enhancers.