The global ankylosing spondylitis market size was valued at USD 4.2 billion in 2019 and is expected to grow at a compound annual growth rate (CAGR) of 8.3% from 2020 to 2027. The introduction of novel products, as well as the entry of biosimilars, is expected to drive market growth over the forecast period. The increasing prevalence of the disease is further anticipated to drive the market. According to a study published in Oxford University Press, the number of cases in Europe was 1.30 to 1.56 million and 4.63 to 4.98 million in the Asia Pacific. The commercialization of novel products and increasing collaborations between companies are expected to accelerate market growth. 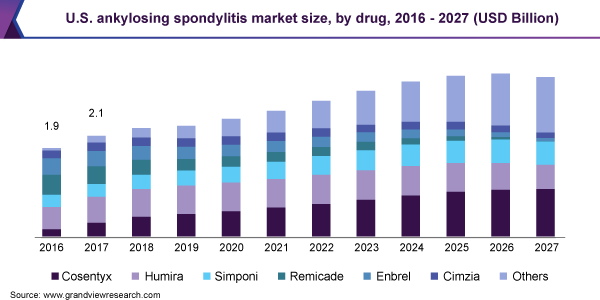 For instance, in August 2019, Eli Lilly and Company received U.S. FDA approval for its product, Taltz injection 80 mg/mL, for the treatment of active ankylosing spondylitis. Prior to this approval, the product was approved for active psoriatic arthritis and moderate to severe plaque psoriasis in March 2016 and December 2017 respectively. Moreover, in September 2018, Gilead Sciences, Inc. and Galapagos NV co-developed a product, Filgotinib, which has completed a phase 2 clinical trial for the indication of moderately to severely active ankylosing spondylitis. The patent cliff has led to the entry of biosimilars into the market. These may improve patient access and contribute to market growth. In November 2019, the U.S. FDA approved Humira’s biosimilar, Abrilada, for the treatment of certain indications including ankylosing spondylitis.

Humira led the ankylosing spondylitis market in 2019 and accounted for over 25% of the overall share owing to its low cost and high efficacy. However, the product is expected to have declining sales over the forecast period due to patent expiry in Europe along with direct biosimilar competition in certain markets.

On the other hand, Cosentyx is expected to be the fastest-growing segment over the forecast period. In October 2019, Novartis received the European Commission approval for Cosentyx for non-radiographic axial spondyloarthritis. The company further plans to submit the label update application to the U.S. FDA and once it is approved, the product is projected to have significant growth over the forecast period.

However, the patent expiry of blockbuster products restrains the market growth. In October 2018, the patent of AbbVie’s proprietary product Humira expired in the EU. Furthermore, the EU patent of Enbrel (Amgen Inc./Pfizer Inc.) and Remicade (Johnson & Johnson Services, Inc./Merck & Co., Inc.) expired in 2015.

North America was the largest region in 2019 and accounted for over 60% of the total share owing to high disease prevalence in the U.S. and Canada and commercial sales of branded drugs. The patent expiry of branded drugs has provided an opportunity for biosimilars. For instance, the patent expiry of Remicade in 2015 resulted in the introduction of Inflectra in 2016, Ixifi & Renflexis in 2017, and Avsola in 2019.

In addition, initiatives undertaken by major players support market growth in North America. In January 2019, Novartis AG and TrialSpark collaborated with an aim to increase patient access to clinical trials. This collaboration will shorten the enrollment timeline and help in the faster development of new therapies. 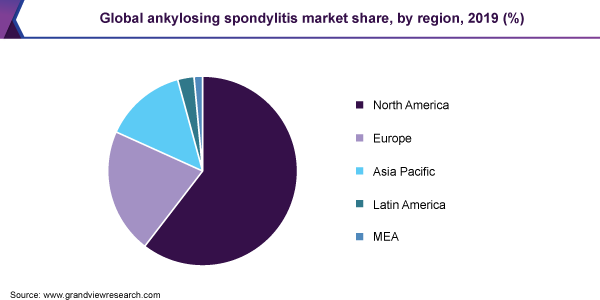 Recently, the trials were launched in various sites in New York to test a treatment for ankylosing spondylitis. The Asia Pacific is projected to be the fastest-growing region owing to increasing disease incidence in developing countries like China, India, and Indonesia. Furthermore, favorable reimbursement policies in China are supporting regional market growth.

Continuous R&D efforts by various pharmaceutical companies to develop better treatment options are expected to boost market growth over the forecast period. For instance, Pfizer Inc. is currently recruiting patients for determining the remission criterion at a 6-month time interval for etanercept. Key companies are also adopting different strategies, such as label expansion and M&A, to increase their market share. For instance, in May 2019, Abbvie Inc. announced the patent extension of its blockbuster drug, Humira, till 2023 in the U.S. after the settlement with Boehringer Ingelheim International GmbH. This deal with Boehringer enabled the company to maintain a monopoly in the U.S. Some of the prominent players in the ankylosing spondylitis market include:

This report forecasts revenue growth at global, regional, and country levels and provides an analysis of the latest industry trends in each of the sub segments from 2016 to 2027. For the purpose of this study, Grand View Research has segmented the global ankylosing spondylitis market report based on drug and region:

What is the ankylosing spondylitis market growth?

Which segment accounted for the largest ankylosing spondylitis market share?

b. Humira dominated the ankylosing spondylitis market with a share of 25.07% in 2019. This is attributable to its cost-effectiveness and safety & efficacy profile.

What are the factors driving the ankylosing spondylitis market?

b. Key factors that are driving the market growth include introduction of novel products as well as the entry of biosimilars.

How big is the ankylosing spondylitis market?

b. The global ankylosing spondylitis market size was estimated at USD 4.19 billion in 2019 and is expected to reach USD 4.57 billion in 2020.

Who are the key players in ankylosing spondylitis market?