The global clinical trials market size was estimated at USD 46.75 billion in 2019 and is anticipated to expand at a CAGR of 5.1 % over the forecast period. Adoption of new technology in clinical trials, increasing prevalence of chronic diseases, and demand from developing countries are some of the major factors driving the global market. Whereas increasing demand for Contract Research Organizations (CROs) to conduct clinical trials is projected to further drive the growth. Diversified expertise of CROs as compared to pharma companies when it comes to performing clinical trials in wide array of geographies and development of drugs in specific therapeutic areas, are a few factors responsible for the demand for CROs in pharmaceutical segment.

According to the BioOutsource Report 2017, the demand for biosimilar testing is expected witness growth in U.S., attributed to the fact that the Food and Drug Administration (FDA) has started addressing the lack of clear guidance with regards to biosimilars, specifically the way the developers should prove similarity of their drugs to that of the originator product. In January 2015, Hospira submitted one of the biosimilar versions of Epogen (Epoetin Alfa) and the result of the review in the U.S. is anticipated from the FDA within a year. 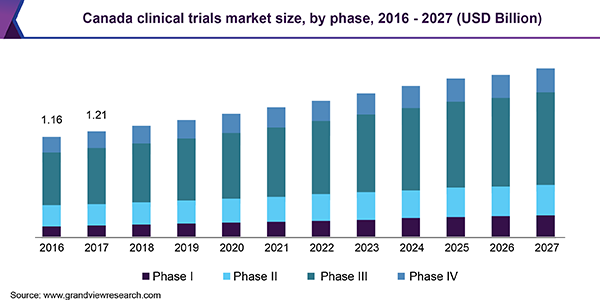 On the basis of phase, the clinical trials market is segmented into phase I, phase II, phase III, and phase IV. Phase III accounted for the largest market share in 2019, as these trials are most expensive and involve huge subjects.

In phase I clinical trials, the investigator spends several months looking at the effects of medication on 20 to 80 people. It also evaluates the tolerability of molecules as the end-point to approve the trial. The other studies such as food and drug to drug interactions are also necessary to performed. According to the FDA, approximately 70% of medications move to phase II.

Phase II trials are performed in two parts; in the first part the range of dose is explored along with efficacy studies while in further study the dose is finalized. In case of oncology, Phase II studies play a crucial role. The FDA estimates that about 33% of medications reach phase III trial.

In Phase III, long term safety studies are performed for registration. In June 2015, Aeterna Zentaris selected Ergomed for its Phase III studies. The U.K. based CRO is likely to help the company conduct the efficacy studies for Macrilen, which is used for adult growth hormone deficiency.

Expanded access, also known as compassionate use, is potential pathway for a patient with serious disease to carry out treatment outside the clinical trial when no satisfactory therapies are available. Increasing innovation in clinical trial methods is predicted to contribute to growth of the expanded access trials segment. For instance, various oncology drugs are routinely administered to patients prior to its approval by the U.S. FDA and considered as a part of expanded access trial. Growing demand for expanded access program owing to the ongoing requiring for treatment of serious diseases, is anticipated to drive the segment growth. Rising incidence of rare disease is anticipated to drive the demand for expanded access program. Initiatives by various pharmaceutical companies such as Johnson & Johnson, which started a pilot program for compassionate use of their unapproved cancer drugs are anticipated to create growth opportunities for the segment in near future.

Based on indication the market for clinical trials is segmented into autoimmune/inflammation, pain management, oncology, Central Nervous System (CNS) condition, diabetes, obesity, cardiovascular, and others. The oncology and cardiology segment are expected to emerge as the fastest growing segments over the forecast period. 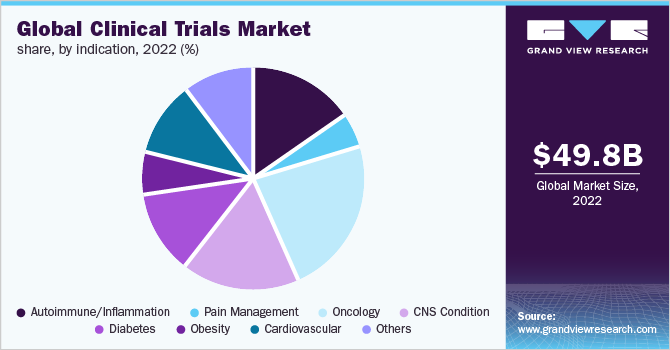 As per the various sources like U.S. FDA, more than USD 38.0 billion is currently spent by the pharmaceutical industry toward preclinical and clinical development of oncology therapy products. Hence, it is anticipated to witness a lucrative CAGR of 5.4% over the forecast period. Owing to the increasing incidence of chronic conditions the pain management segment is expected to register lucrative growth over the forecast period. The segment is further classified into acute and chronic pain, wherein acute pain is expected to witness the fastest growth in the forthcoming years.

North America dominated the market in 2019 and is expected to remain dominant throughout the forecast period. This can be attributed to increasing R&D in this region and increasing adoption of new technology in clinical research. North America conducts the highest numbers of clinical trials and U.S spends the highest healthcare per capita with USD 753.7 million funded by the National Institute of Health (NIH) for research in 2018. These factors are anticipated to boost the regional market growth.

Asia Pacific is anticipated to expand at the fastest CAGR over the forecast period, due to the factors such as increasing diabetic and cancer patients in countries like India, China, Japan, Singapore, and Australia. Rising prevalence of Type 1 diabetes is anticipated to drive the regional market. According to the Eighth Edition of the IDF Diabe    tes Atlas report 2017, In China, around 50,000 children and adolescents below 20 years of age were living with type 1 diabetes.

Rapid adoption of advanced healthcare technology for improved healthcare is one of the key factors affecting competitive nature of the market. Also, major players often engage in mergers and acquisitions along with new product launches in order to retain share and diversify the product portfolio.

This report forecasts revenue growth at global, regional, and country levels and provides an analysis of the latest industry trends in each of the sub-segments from 2016 to 2027. For the purpose of this study, Grand View Research has segmented the global clinical trials market report on the basis of phase, study design, indication, and region: