The global antibiotics market size was valued at USD 45.31 billion in 2018 and is projected to expand at a CAGR of 4.0% over the forecast period. Rise in the cases of infectious diseases along with the imbalance of demand-supply of antibiotics is the main factor driving the growth of this market. Increasing efforts undertaken by major companies for the development of advanced products will also support market growth. According to data published by the Pew Charitable Trust, in March 2016, about 37 promising molecules were being investigated within the U.S. market. The majority of these are in phase II clinical trials and are anticipated to hit the market between 2018 and 2020.

Furthermore, supportive government legislation, such as the Generating Antibiotics Incentives Now (GAIN) Act, is expected to expedite the approval process. GAIN Act has provisions, which facilitate the development of therapies against antibiotic-resistant pathogens. Diarrhea remains the leading cause of death among children across the globe and it requires antibiotic intervention to prevent the morbidity. Other infectious diseases identified to pose a high burden are HIV/AIDS, pneumonia, malaria, and tuberculosis. Furthermore, the emergence of new infections, such as the Zika and Ebola virus, are also supporting the development and uptake of antibiotics. 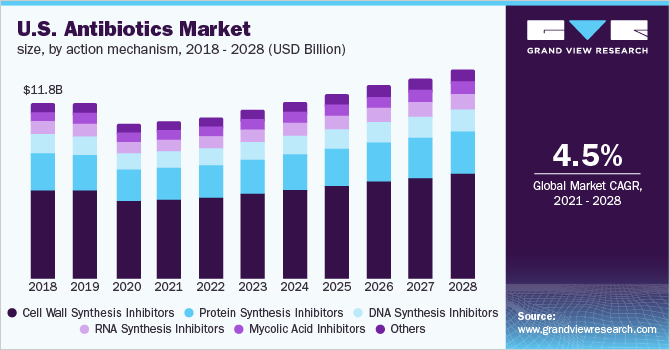 Strategic plans of collaborative development to divide the expenses are now being commonly implemented by the market participants. This, in turn, is expected to result in the development of more number of molecules. In addition, public-private collaborations, where funds and innovative R&D approaches are advanced by public bodies to antibiotics manufacturers, will further support the generation of new pipeline products. For instance, in September 2015, the Department of Health and Human Services signed a five-year agreement with AstraZeneca, where the former provided USD 220 million for the exploration of 2 molecules namely, Avibactam and Aztreonam.

However, the development of resistance, especially in the case of bacterial infections, is on the rise and renders the antibiotic or its entire class ineffective, thereby critically impacting the overall market growth. According to researchers, the resistance rate is expected to rise over the forecast period but may vary depending upon the strain, geographies, and patient ethnicity. According to the data published by the CDC in 2015, about 2 million people are affected by antibiotic resistance development causing 23,000 deaths annually.

On the basis of drug class, the market is segmented into cephalosporins, penicillins, fluoroquinolones, macrolides, carbapenems, aminoglycosides, and sulfonamides. The other antibiotics segment comprises of tetracyclines, imidazoles, lincosamides, and monoclonal antibodies. The other antibiotics segment is anticipated to expand at the highest CAGR during the forecast years. The Development of monoclonal antibodies for individuals that have developed antibiotic-resistance is a key highlight of this segment. 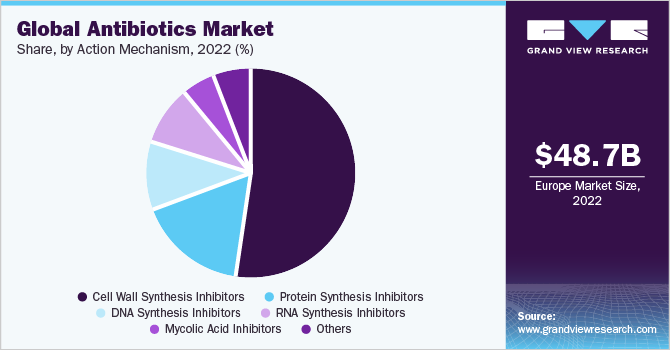 Increasing incidence of pneumonia, bloodstream infections, and Urinary Tract Infections (UTI) is anticipated to foster the usage of carbapenems class of antibiotics. The growing threat of drug-resistance is leading to the development of newer combinational formulations. For instance, the emergence of multi-resistance tuberculosis and infections caused by Methicillin-resistant Staphylococcus aureus (MRSA) is difficult to treat with antibiotics, therefore, the development of new antibiotics is required.

North America held a substantial share of the global market in 2018. The Healthcare System in the North American region facilitates the usage of branded products, however with the loss of exclusivity of certain molecules, sales in this region eroded significantly in the past few years. Asia Pacific held a significant share in the past on account of a large population base, high prevalence of infectious diseases, regulation reforms, and greater usage of generic medicines. Latin America, especially Brazil, with its strong growth in the pharmaceuticals sector is also projected to exhibit remunerative growth. An outbreak of certain viruses, such as Ebola, in the Africa contributed to the growth of the region.

Key marketing strategies undertaken by most of these firms include product development, regional expansion, and collaborative development. For instance, In August 2016, Pfizer entered into an agreement with AstraZeneca to acquire the development and commercialization rights to its late-stage small molecule anti-infective business, mainly outside the U.S.

This report forecasts revenue and volume growth at global, regional, and country levels and provides an analysis of the latest industry trends in each of the sub-segments from 2015 to 2026. For the purpose of this study, Grand View Research has segmented the global antibiotics market report on the basis of action mechanism, drug class, and region: