The global application delivery controller market accounted for USD 2,740.4 million in 2015 and is expected to witness growth at a CAGR exceeding 5% over the forecast period. An ADC is a device that is typically placed in a data center between one or more applications and the server’s firewall. Application delivery controllers have gained traction within the last decade, largely due to the growing need for legacy load balancing appliances to improve the performance as well as to handle more advanced requirements associated with application delivery. ADCs are purpose-built networking appliances that function to improve the security, resiliency, and performance of apps delivered over the web. 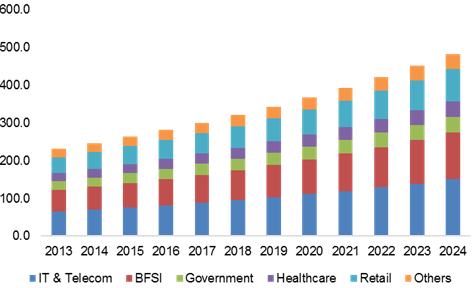 The industry is expected to grow at a considerable rate owing to the increasing requirement for cloud computing, big data, and virtualization that has resulted in an increased requirement for efficient and reliable webbing solutions. Emerging technologies, such as software-defined storage and software-defined networking, are anticipated to propel the application delivery controller market demand over the forecast years.

The growing end-user mobility is extending the connectivity requirements for corporate IT resources. The rise in the number of mobile device connections is further increasing the scale of the challenges faced. Furthermore, companies are increasingly focusing on implementing policies such as "Bring Your Own Device", resulting in the introduction of additional end-points (i.e. laptops, tablets, and smartphones) into the network environment, which results in increased network complications.

The governments worldwide are aware of the increased importance of the internet in particular as well as of the growing criticality of IT in general. This awareness has resulted in the increased emphasis on regulations and legislations owing to the government’s attempt to exert control over the business operations. These regulations include Payment Card Industry Data Security Standard (PCI DSS), Health Insurance Privacy and Accountability Act (HIPPA), Communications Assistance for Law Enforcement Act (CALEA), and Gramm-Leach-Bliley Act, among others.

The mounting ADC demand in countries including the U.S., UK, and Germany is anticipated to offer avenues for growth over the next eight years. Asia Pacific is expected to exhibit a substantial growth rate over the next eight years majorly owing to the increasing globalization, distributed enterprise architecture, rising security awareness, and rapid population increase, primarily in countries including China and India.

High preference for virtual as compared to hardware-based ADCs

The hardware-based application delivery controller accounted for over USD 1,000.0 million in 2015 and is expected to grow at a CAGR of over 3% over the forecast period. However, the virtual ADC is expected to witness a comparatively higher demand at a CAGR exceeding 7% over the forecast period. This demand is primarily on account of the increasing data center traffic.

The developments in the IT & telecom sector, such as the emergence of Bring Your Own Device (BYOD) and Choose Your Own Device (CYOD), are expected to positively impact industry growth over the coming years. The establishment of new businesses in emerging economies is further expected to propel the demand for cloud-based solutions.

Additionally, the virtual application delivery controller is cost-effective as compared to the hardware-based ADCs as it offers better scalability, IT agility, and flexibility as per the evolving customer demand, thereby surging the demand for these solutions.

ADCs, which are widely deployed as a key fixture in the enterprise, help applications adapt to the networks and protocols that are in place today. They also ensure that apps perform optimally, are always available, and do not present any security risks either to the user or the business.

SMEs accounted for over 60% of the total revenue share in 2015 and are expected to grow at a CAGR exceeding 5% over the forecast period. This is ascribed to the high market penetration of ADC in server firewalls and network security systems.

Small and medium-sized businesses (SMBs) are progressively relying upon web-enabled services and web-based apps for running their business. E-commerce transactions and CRM are accessed both remotely and locally from outside the business facilities. These web-enabled apps are prone to the Denial of Service (DoS) attacks and attacks from intrusions and viruses as traffic enters the network through different firewalls and ports without inspection. ADCs help reduce risks related to IT security and ensure compliance with data security and privacy regulations.

The BFSI segment captured a sizeable share in 2015, accounting for over USD 600.0 million, and is anticipated to grow at a CAGR of over 5% from 2016 to 2024. The increasing number of cyber-attacks and dynamic nature of the security industry call for the protection of sensitive financial data from breaches with minimum risk and maximum returns. As the banking institutions move towards the cloud, the segment exhibits higher potential for the deployment of these delivery controllers.

The IT & telecom sector is expected to grow at a CAGR of over 5.5% from 2016 to 2024. These solutions help the IT & telecom industry with the provision of greater control over their infrastructure that leverages the existing data center resources to meet the dynamic nature of the current imperatives of business and operations. By using ADCs to gain a hold over infrastructure, the IT industry can easily eliminate the issues before they occur, thereby increasing productivity, decreasing stress, and saving time & money.

North America application delivery controller market accounted for over 25% of the total revenue share in 2015, primarily owing to the well-established IT & telecom sector in the region. The U.S. held the major share in the revenue on account of the presence of a large number of enterprises relying upon the application delivery controllers for performance improvement as well as managing the network traffic. Furthermore, trends such as virtualization, increasing adoption of cloud and SDN devices, and network security are anticipated to positively impact the market growth over the forecast period.

However, the most potential growth for ADCs is estimated to remain dominant in Asia Pacific and Europe. Europe accounted for over USD 600.0 million in 2015 and is expected to grow at a CAGR of over 5.0% over the forecast period. This is ascribed to the already established network infrastructure in the region.

Asia Pacific emerged as the fastest growing region for application delivery controller. This growth is primarily on account of increasing internet penetration. Furthermore, several government initiatives, including the OpenNet initiative by the Chinese government and Make in India by the government of India to improve the performance of web applications and services, are expected to have a large impact on the industry expansion over the coming years.

The industry is consolidated in nature owing to the presence of a few industry players that govern the market. The key industry players include F5 Networks, Inc., A10 Networks, Inc., Array Networks, Inc., Citrix Systems, Brocade Communications Systems, Inc., Dell Inc., Fortinet Inc., Barracuda Networks Inc., and KEMP Technologies Inc. among others. Mergers & acquisitions to expand the existing product portfolio and gain advantage remains to be a key growth strategy. For example, in 2015, Brocade acquired the SteelApp business unit from the Riverbed technology to strengthen the company‘s software networking portfolio for the new IP data center deployments.