The global edge computing market size was valued at USD 1.47 billion in 2018 and is expected to expand at a CAGR of 54.0% from 2019 to 2025. Growing need to collect, process, and analyze the large volumes of data generated due to digitization at the edge of the network with reduced latency is expected to drive the growth of the market. Rising adoption of Internet-of-Things (IoT) and Big Data and the proliferation of cloud services in various industry verticals, including healthcare, retail, and manufacturing, is generating large volumes of data.

Thus, the need for edge computing is growing as the complexity in processing these large data volumes is increasing. An edge application makes effective use of the IoT devices’ processing power to aggregate, score, and filter the IoT data. At the same time, it also utilizes the flexibility and power of the cloud to execute complex analyses of the data and contributes to the decision-making process. 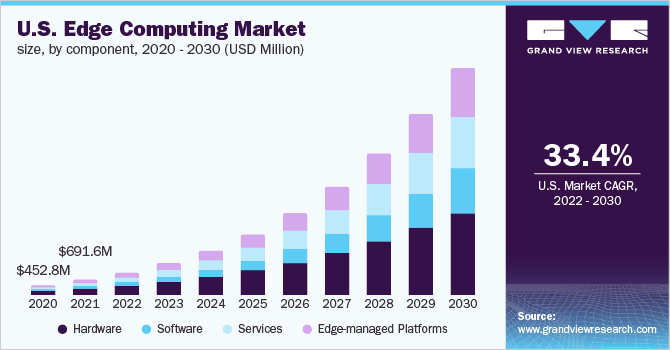 Thus, it can ensure seamless and robust integration between the IoT and cloud. Subsequently, IoT devices get a major role to play as the data analysis takes place around these devices. This technology analyzes the data at the edge of the network and facilitates quick decision-making. It fulfills the local computing needs by processing the data at the micro data centers rather than sending it to the main center.

In remote locations, where network connectivity is a challenge, it also helps in reducing the latency. 5G networks and edge technology often complement each other as network providers cannot deliver the benefits associated with the 5G standards without leveraging edge computing. Moreover, with the help of this technology, network providers can also move their IT resources and centralized data centers to nearby base stations and other facilities closer to the end user.

The energy and utilities segments accounted for the largest market share in 2018. The global energy industry has been evolving continuously in terms of electric grid bidirectionality, effective energy storage, and public-private investments, thereby transforming the conventional transmission and distribution infrastructure. Edge computing would particularly serve as a key enabler for smart grid networks. Having realized that safety monitoring is of paramount importance to protect critical infrastructure, such as oil & gas processing facilities, several cutting-edge IoT devices are being deployed to ensure adequate safety from any impending disaster.

The manufacturing and construction industries accounted for a sizeable revenue share in 2018 and are expected to provide more opportunities for the market participants. While the technology in focus has already been playing a major role in industrial automation, it is also expected to pave the way for smart manufacturing by utilizing a more programmatic data-led approach to manufacture high-quality goods.

The hardware segment led the global market in 2018. Edge computing solutions require various hardware components, such as gateways and routers. Cloudlets and micro data centers are also crucial for ensuring smooth functioning of these solutions. At the same time, commoditization of data center network hardware and the evolution of next-generation technologies, such as IoT, and concepts, such as self-driving cars, are also expected to drive the segment growth. 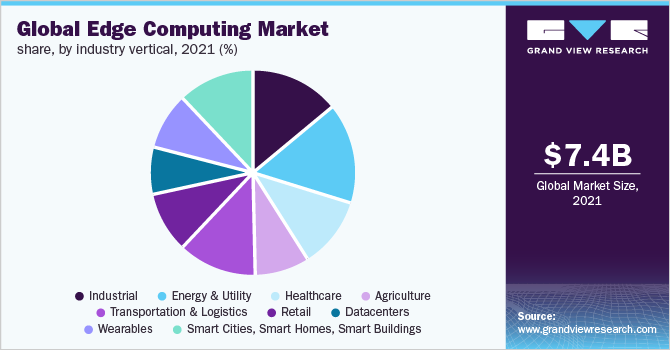 The managed platforms segment accounted for a significant market share in 2018. Several end-use industries are adopting IoT-enabled platforms. Organizations are also trying to deploy a platform that can offer a robust capacity for offline connectivity, cloud-based orchestration for device management, and a hardware-agnostic architecture. This is expected to propel the growth of this segment in the years to come.

North America accounted for the largest market share of more than 45% in 2018 and is projected to maintain the dominance throughout the forecast years as the consumer and business sectors in the region rely on IoT devices. Higher cloud adoption in the region is contributing to the continued transition toward the technology. Development of innovative concepts, such as autonomous cars, within the region is also expected to propel the regional market growth in the years to come.

The market in Asia Pacific is anticipated to register the highest CAGR from 2019 to 2025. The technology is still in its nascent stages of adoption in the region due to the lack of supporting infrastructure and because organizations are primarily using micro data centers as a preventive measure against data loss. Howver, government initiatives to encourage digitalization and roll out advanced infrastructure are expected to drive the market in the coming years.

Heavy investments in IoT and cloud technologies are also expected to drive the regional market in future. Collaboration between Reliance Jio Infocomm Ltd. and Cisco Systems, Inc., aimed at deploying edge computing for enhancing and optimizing video experience over the network by developing a mobile Content Delivery Network (CDN), is indicaitve of these trends.

For instance, in February 2019, Amazon Web Services (AWS) Inc. added two additional edge locations in India. Prior to that, the company had already launched four new services and capabilities for IoT and edge computing applications. In June 2018, Hewlett Packard Enterprise Development LP announced that it will invest USD 4 billion in intelligent edge technologies and services over the next four years. The investment would be utilized to carrying out extensive R&D in Artificial Intelligence (AI), Machine Learning (ML), automation, and edge technology.

The market is expected to witness strategic partnerships between telecom operators and solution providers due to growing application of IoT coupled with the continued rollout of 5G networks. For instance, in January 2019, IBM and Vodafone signed an agreement to develop new digital solutions based on IoT, 5G, and edge computing. The agreement allowed IBM to leverage Vodafone’s capabilities in IoT and 5G technology, while Vodafone got access to IBM’s multi-cloud solutions.

This report forecasts revenue and volume growth at global, regional, and country levels and provides an analysis of the latest industry trends in each of the sub-segments from 2019 to 2025. For the purpose of this study, Grand View Research has segmented the global edge computing market report on the basis of component, end use, and region: