The Arthroscopy market was valued at USD 4.0 billion in 2015 and is expected to witness a CAGR of 4.9% over the forecast period. Rising geriatric population is primarily driving the growth of the as this population bracket is most prone to injuries requiring arthroscopic procedures.

An estimated 4.0 million knee arthroscopic surgeries are conducted globally, as per the America Academy of Orthopedic Surgeons. Arthroscopy helps the patients to avoid total knee replacement. According to the American Orthopedic Society for Sports Medicine, approx. 1.6 million shoulder arthroscopic procedures are conducted annually. With the development in technology and introduction of improved versions, the arthroscopic procedures volume is estimated to rise substantially. 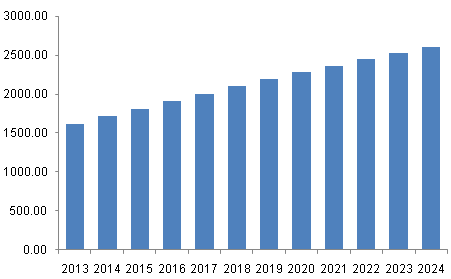 The increasing prevalence of musculoskeletal disorders coupled with growing demand for minimally invasive surgeries is estimated to propel future growth. For example, Ceterix launched minimally invasive suture passer known as NovoStitch. The device can be used even for complicated anatomical positions to ensure joint stich.

Visualization systems are used to identify the injury at the joint site. With technological innovations at the forefront, the images can be displayed in 3D format. Furthermore, the rise in the use of fluid management systems to optimize the visualization process will spur the demand.

"Arthroscope implants were the largest selling product type in 2015"

Visualization systems are used for conducting early diagnosis and intervention of joint related disorders as they provide clear field view of the joint. Due to the growing focus on minimally invasive surgeries, the demand for visualization systems is going to experience immense growth.

"North America is the largest Arthroscopy market followed by Europe"

North America dominated the global scenario in terms of revenue in 2015 owing to the high adoption rate for arthroscopic procedure; increasing prevalence of joint related disorders, such as osteoarthritis, rheumatoid arthritis, and sports injuries; and the increasing geriatric population.

China is one of the biggest opportunities for arthroscopy due to high incidence of musculoskeletal disorders, rising aging population, and a strong medical device manufacturing sector. China is expected to be an evolving country for key companies due to the presence of target population and high unmet clinical needs. Global share of China is estimated to be over 30.0% in 2024.

Companies such as Smith & Nephew plc; Arthrex Inc.; ConMed Corporation; and DePuy Synthes are holding dominant positions. The market is marked by the presence of mergers and acquisitions. For instance, in May 2016, Zimmer Biomet announced the acquisition of Cayenne Medical in order to boost its sports medicine division.

The sector has also witnessed a few strategic alliances. For instance, Smith & Nephew plc partnered with Tenet Medical for the distribution of its limb positioned devices.