The Asia Pacific drug development market size was estimated at 37.62 billion in 2018 and is projected to register a CAGR of 6.54% during the forecast period. The changing market dynamics, such as the constant growth of the pharmacy market coupled with saturating growth rates in established markets drive market growth. Furthermore, capital inflow in the Asian pharmaceutical industry from the western region has offered substantial business expansion opportunities to the new entrants for business expansion. 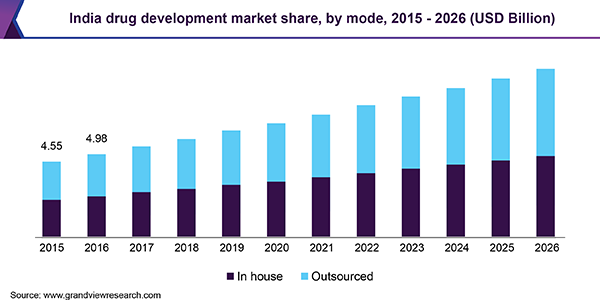 The companies have effectively shifted from providing a "speed and cost" based value proposition in clinical trials, towards value-added propositions. This includes the transition from early stages of licensing for molecule development to later stage licensing. In addition to this, the trend is being embraced for service model charges as well as risk sharing and partnerships.

The regulatory authorities like the China Food and Drug Administration FDA (CFDA) have made notable improvements in addressing critical gaps in the system. These are working on providing the fundamentals to improve the registration process and accelerate innovations in the Asia Pacific drug development market to induce growth.

In 2018, there was a significant increase in the new product launches in China, the numbers have changed from five or six each year between the tenure of 2014 to 2016 to thirty-seven products in 2017. In addition, by the end of 2017, around 180 candidates obtained priority-review status. The increase in new product launches depicts the remarkable growth of the Asian drug development space.

The cost-saving advantages within the Asian market have prompted the global companies to integrate Asia into their global drug development framework. However, the presence of certain challenges in the region is expected to hamper growth to a certain extent. One of such challenges is, in Asia the cost of trials or research has to be paid by the research sponsors, however, in the western countries insurance providers or government payers make payment for the general healthcare costs of enrolled patients throughout the trial. Yet the overall cost of running studies in Asia is significantly less expensive than in the West, thereby reducing the impact of this restraint.

The complex and long development cycles and regulatory challenges have led to the adoption of different business models of R&D. Companies such as Pfizer, AstraZeneca, and Sanofi have included various strategies in their business plans for the development of inexpensive innovative products. Companies are also engaged in the expansion of own sales force for collaboration with distributors and contract sales organizations

Drug developers have considered the outsourced mode of drug development as a source of competitive advantage, particularly, when the production is conducted in low-cost countries like India. In addition, the patent expiration of branded products, competition from the generic drug industry, and stringent government regulations for new drug development has led to the uptake of CMO services.

Along with the western companies, local companies like Eisai are also engaged in outsourcing their pharmaceutical manufacturing process, primarily for generics, in the Asian market. As a result, the outsourced model of drug development is estimated as a key contributor to the market revenue.

Recent FDA approvals of breakthrough and robust therapeutics which are designed to target various cancer types have encouraged substantial R&D efforts in the oncology arena. Furthermore, there has been notable growth in the oncology pipeline portfolio over the past years. These factors have led to the large revenue share of the oncology segment.

This segment is expected to maintain its dominance throughout the forecast period. This is because most of the biotherapeutics developing companies are strategizing their investment towards cancer management. 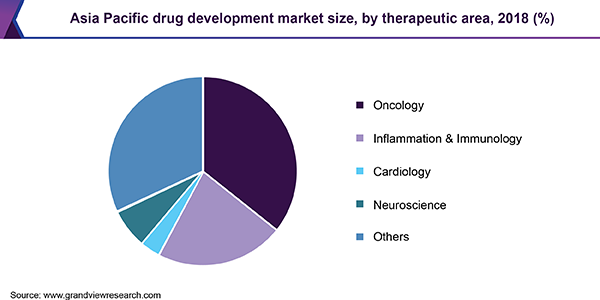 Moreover, the presence of consortia to drive the oncology-focused multinational collaborative clinical trials across Asia is driving the segment growth. For instance, the establishment of ‘Asian Early Phase Oncology Drug Development Consortium’ in November 2017 and the member institutions were from Japan, China, Taiwan, Singapore, and South Korea.

Since stability studies is a common challenge for all drug developers, pharma companies are engaged in collaborative efforts to effectively boost the uptake of stability testing steps. The companies are making investments in secure third-party platforms in order to develop analytical models that aid in predicting early drug stability issues in the development process.

Furthermore, the advent of in silico testing, also known as virtual testing, for the prediction of stability issues early in the R&D phases has spurred the revenue generation in this segment. The employment of robust and expensive technologies to adhere to the guidelines for the standardization of stability testing across the drug development sector has led to the largest share of this segment.

China is anticipated to take a more integral part in the global drug development sector on account of significant regulatory changes. The changes are primarily aimed at accelerating innovations in the country. One such change is a dramatic reduction in the drug approval timelines by the CFDA.

In the current scenario, China drug market has outpaced the Japan market and is recognized as the second largest pharmaceuticals market. Changing government reforms, greater capital investments, and expanding reimbursement by private and public entities are some prime factors that have led to the largest revenue share of China in the drug development market.

However, in the coming years, India and Singapore are expected to emerge as the lucrative markets owing to the recognition of these countries as preferred locations for clinical trials. This is particularly in the emerging bio-similar market where Indian firms are expected to position themselves as a key entity by combining their expertise in innovations and generics.

The constant growth of the Asian market has led to the launch of several domestic start-ups such as Elucidata, Aslan Pharmaceuticals, and Engine Biosciences. These companies are anticipated to contribute significantly to regional market growth through their advanced and robust portfolio to support pharmaceutical R&D

This report forecasts revenue growth at regional and country levels and provides an analysis of the latest industry trends in each of the sub-segments from 2015 to 2026. For the purpose of this study, Grand View Research has segmented the Asia Pacific drug development market report on the basis of mode, process step, therapeutic area, and country:

How big is the Asia Pacific drug development market?

b. Oncology dominated the Asia Pacific drug development market with a share of 36% in 2019. This is attributable to increasing cancer prevalence coupled with growing demands for effective therapeutics to tackle the disease

Who are the key players in Asia Pacific drug development market?

What are the factors driving the Asia Pacific drug development market?

b. Key factors that are driving the market growth include increasing investment in drug R&D, expanding drug outsourcing, and incorporation of Artificial Intelligence (AI) in drug development process