The Asia Pacific fuel dispenser market size was estimated at USD 1.04 billion in 2015. Growing demand for vehicles in the region is expected to have positive impacts on the overall market growth over the forecast period. The automotive industry in developing as well as developed economies, including China, India, and Japan, has witnessed significant growth in recent years, on account of which the demand for fueling stations and fuel dispensing systems has been growing in the region. This trend is expected to continue during the forecast period, owing to which the demand in the market is expected to surge. 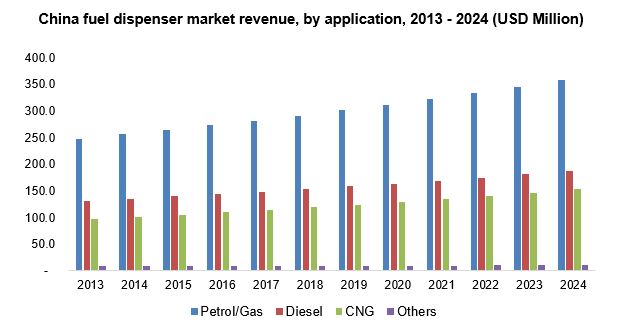 Key players involved in the industry have their distribution and supply facilities established across the neighboring regions. The cost competitiveness by the suppliers is the key criteria for influencing buyers’ decision. Utilization of aluminum for manufacturing of the nozzles of the products is expected to grow as it is non-corrosive and lightweight.

Petrol/gasoline is expected to dominate the Asia Pacific fuel dispenser market, accounting for over 48% of the revenue share in 2015. The automotive industry is growing significantly in developing economies, including China, India, Sri Lanka, and Bangladesh. The demand for fuel in industrial as well as the automotive industries is growing, owing to which the need for the product is rising in the region. Increasing consumer per capita incomes has also created the demand for vehicles in these economies. The surge in the demand for vehicles is likely to augment the demand for fueling stations, thereby positively impacting the industry growth during the forecast period.

Increasing demand for petrol in the Asia Pacific region over the past decade, mainly driven by growing demand for motor vehicles owing to increased disposable incomes. The rising demand for petrol or diesel-fueled vehicles is projected to boost industry growth over the forecast period. However, these vehicles are expected to face stiff competition from vehicles using hydrogen or CNG fueled engines, especially in countries India, Japan, and China; which is expected to restrict the petrol dispensing systems growth by 2025.

The compressed natural gas (CNG) segment is expected to gain a higher share owing to the growing awareness among consumers regarding the utilization of eco-friendly and emission-free fuels. India and China have been struggling to meet their CO2emission limits over the past few years. The application of petrol and diesel vehicles emits large amounts of gases, which degrade the environment, on account of which the governments have been promoting the utilization of CNG to conserve the environment and reduce the effects of global warming. This is expected to augment the demand for CNG dispensers over the forecast period in Asia Pacific.

Submersible dispensers are expected to dominate the Asia Pacific industry over the forecast period. The technology is being utilized for a long period of time; and due to the low installation and maintenance costs, the demand for this technology is growing significantly in the region. Submersible fueling systems account for over 80% of the total market, as of 2015. The submersible systems use a pump submersed into the tank, which supplies fuel to all the systems present in the station. 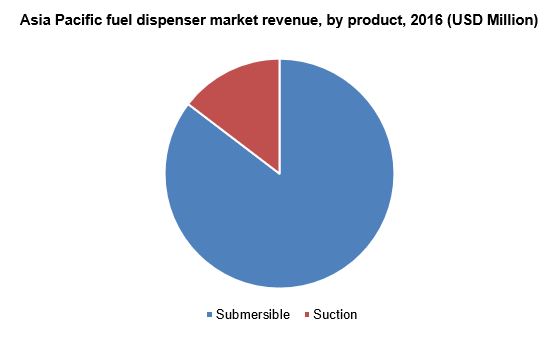 Suction dispensers are witnessing sluggish growth owing to the high price of the product, coupled with high installation and maintenance costs associated with it. The suction dispensers offer superior efficiency as compared to submersible pumps; owing to high suction and dispensing capacity. Furthermore, these systems can continue operation during suction pump failures as long as a single suction pump is operational. However, high repairing cost coupled with system complexity is expected to restrain growth over the next eight years.

China is expected to dominate the industry in Asia Pacific, having accounted for over 50% of the revenue share in 2015. The growing manufacturing and consumption of dispensing systems in the country, owing to the growing number of CNG vehicles and petrol vehicles, is expected to aid market growth over the next eight years. The positive gross domestic product (GDP) of the country and steady economic growth are expected to drive the automotive industry growth in China, which is likely to aid the industry growth for fueling stations and fuel dispensers over the forecast period.

The Asia Pacific industry has been witnessing highly competitive rivalry in recent years, primarily due to the several established manufacturers, suppliers, and new entrants in the industry.