The Asia Pacific radiation oncology market size was valued at USD 1.4 billion in 2019 and is expected to grow at a compound annual growth rate (CAGR) of 6.2% from 2020 to 2027. One of the major factors attributed to the growth of the market for radiation oncology is the increasing prevalence of cancer. For instance, according to WHO’s cancer facts, prostate cancer, female breast cancer, lung cancer, and bowel cancer are the four most commonly prevalent cancers. Lung cancer is the most common cause of deaths in Asia, almost 1 million, i.e., 19.5% of the total deaths were due to lung cancer in 2018. Increasing the adoption of radiotherapy in oncology is expected to accelerate market growth. For instance, by 2035, China and India are estimated to require over 3,800 and 1,200 additional machines, respectively. Hence, the adoption rate is significantly increasing in the developing countries of Asia Pacific. 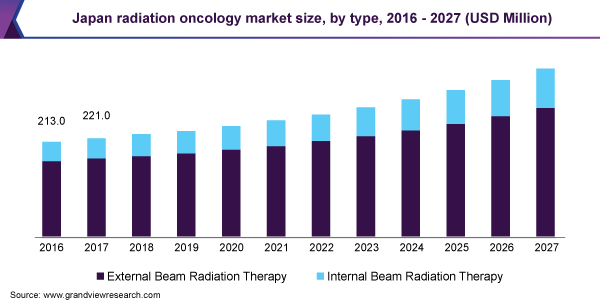 In addition, the introduction of new technologies is likely to propel the growth of the market for radiation oncology over the forecast period. For instance, in March 2019, BLK Super Specialty Hospital Delhi launched the first Radixact 9 TomoTherapy for the treatment of cancer. In January 2019, Apollo Hospitals launched the first proton therapy center in South East Asia.

Increasing initiatives undertaken by key players is expected to fuel the growth of the market for radiation oncology. For instance, in June 2017, the Singapore Institute of Advanced Medical Holdings and Royal Philips announced a collaboration with IBA Worldwide and Varian Medical Systems to build Advanced Medicine Oncology Centre, an international biomedical research hub, in Singapore. The center would provide clinical informatics technologies, high-quality imaging, and treatment options to meet the growing needs of cancer patients in the country.

External Beam Radiation Therapy (EBRT) segment accounted for the largest revenue share of 78.5% in the Asia Pacific radiation oncology market in 2019. This growth is due to an increase in awareness about treatment procedures and increasing usage of therapies such as tomotherapy, CyberKnife, gamma knife, and Electron-emitting high energy linear accelerators (Linacs). For instance, in October 2019, Thailand's Lopburi Cancer Hospital became the first Asia Pacific hospital to clinically use the combination of RayStation (RaySearch) and Radixact (Accuray Incorporated) treatment delivery system.

High adoption of cyclotrons is anticipated to drive the segment in the market for radiation oncology over the forecast period. For instance, in September 2017, Kinetics Corporation Ltd. and the State Atomic Energy Corporation ROSATOM will supply cyclotron with a radiochemical laboratory to Thailand Institute of Nuclear Technology (TINT). This is expected to allow Thailand to develop its own isotopes as all the current isotopes in the country are exported. Installation of a cyclotron will drive R&D activities in the country and help meet the demand of isotopes.

On the basis of technology, the EBRT segment accounted for the largest revenue share of 88.2% in 2019 in the market for radiation oncology. The segment is anticipated to maintain its dominance during the forecast period. This is owing to the presence of various technologies such as proton beam therapy, Image-Guided Radiation Therapy (IGRT), and Intensity Modulated Radiotherapy (IMRT).

Proton beam therapy is projected to the highest CAGR under the EBRT segment in the market for radiation oncology over the forecast period. An increasing number of installed bases is expected to drive the proton beam therapy technology segment. For instance, in June 2019, Varian installed the ProBeam Compact single-room proton therapy system for Cyclotron at one of the hospitals in Thailand.

The breast cancer segment held the largest revenue share of 26.8% in 2019 under the EBRT segment in the market for radiation oncology. This is owing to the rising prevalence of the disease in the region. For instance, according to WHO, 911,014 new cases of breast cancer were reported in 2018 in Asia, accounting for 22.3% of the overall cancer cases in females. 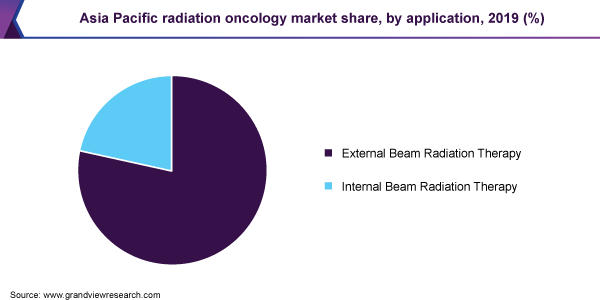 In addition, technological advancements and strategic collaborations, such as mergers and acquisitions are anticipated to boost the growth of the market for radiation oncology. For instance, in October 2018, Siriraj Hospital-acquired Elekta’s Versa HD radiation therapy systems (LINAC). In addition to LINAC, it acquired Monaco treatment planning software and MOSAIQ Oncology Information System. This acquisition would enable the hospital to provide effective treatment for cancer patients.

Japan accounted for the largest revenue share of 17.3% in the market for radiation oncology in 2019 due to the increasing geographic expansion of key players to increase their market share and introduction of novel technologies in the country. For instance, in April 2019, Varian Medical Systems, Inc. announced that Ofuna Chuo Hospital would be the first clinic in Japan to treat patients with the Halcyon radiotherapy system. In October 2018, IBA announced treatment of the first cancer patient with its ProteusONE compact proton therapy solution in Japan.

Moreover, India is projected to be the fastest-growing country in the market for radiation oncology over the forecast period. For instance, according to an article published in the Indian Journal of Cancer in 2019, the utilization rate of radiotherapy in India is greater than 55.0% and is expected to reach 70% to 80% in some types of cancer. Approximately 800,000 patients need radiotherapy every year in India. Currently, India has nearly 365 medical accelerators, 8 Tomotherapy machines, 180 telecobalt units, 7 Gamma knife units, 2 intraoperative radiotherapy machines, 7 Cyber-knife machines, and 250 remote afterloading brachytherapy units. As of 2017, the country had 6 LDR and 240 HDR systems. According to an article published in the Seminars in Radiation Oncology in 2017, India will require 1,200 treatment machines by 2035.

The key players that dominated the market for radiation oncology in 2019 include Elekta AB and Varian Medical Systems. Mergers and acquisitions, collaboration for R&D, partnerships, geographic expansion, and product portfolio expansion are some of the strategic initiatives undertaken in this market. For instance, in March 2020, Varian received approval from the China National Medical Products Administration (NMPA) for the Halcyon 2.0 treatment system. Approval of new systems is expected to drive the market for radiation oncology. Moreover, in February 2020, the Government of Québec acquired Elekta’s 12 Versa HD linear accelerators. The expansion of radiation therapy devices is estimated to combat the rising prevalence of cancer in Québec. Some of the prominent players in the Asia Pacific radiation oncology market include:

This report forecasts revenue growth at regional and country levels and provides an analysis of the latest industry trends in each of the sub-segments from 2016 to 2027. For the purpose of this study, Grand View Research has segmented the Asia Pacific radiation oncology market report on the basis of type, technology, application, and country:

How big is the Asia Pacific radiation oncology market?

What is the Asia Pacific radiation oncology market growth?

b. Brachytherapy dominated the Asia Pacific radiation oncology market with a share of 49.2% in 2019. This is attributable to a quick recovery, short Length of Stay (LoS) in hospitals, and low risk of postoperative complications.

Who are the key players in the Asia Pacific radiation oncology market?

What are the factors driving the Asia Pacific radiation oncology market?

b. Key factors that are driving the market growth include the growing adoption of radiotherapy, increasing prevalence of cancer, technological advancements in radiotherapy, and rising healthcare expenditure.