The global radiation oncology market size was valued at USD 5.7 billion in 2016 and is expected to expand at a CAGR of 6.5% over the forecast period. Rising adoption of radiotherapy, rapid technological advancements, high prevalence of cancer, and increasing healthcare expenditure are the key contributing factors for lucrative market growth. 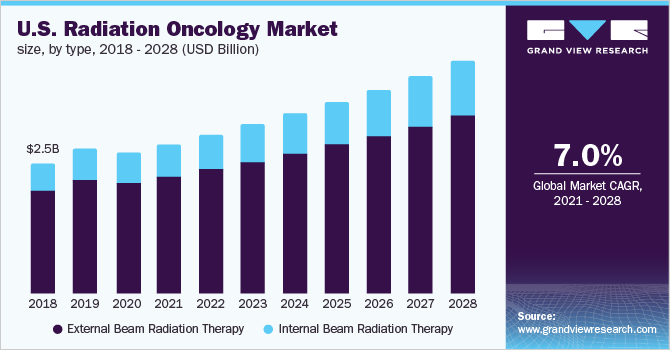 Radiotherapy is considered as an effective treatment for different types of cancer. It can also be used in combination with surgery, chemotherapy, or immunotherapy. Rising adoption of this therapy is boosting the market growth at a significant rate. Radiotherapy can be used at three levels including primary cancer treatment, adjuvant therapy after chemotherapy or surgery, and as palliative therapy to shrink the size of tumor and to suppress the symptoms.

High prevalence of cancer is expected to fuel demand for radiotherapy over the forecast period. According to the World Health Organization (WHO), 14.0 million new cases of cancer and 8.2 million cancer-related deaths were registered in 2012. This number is anticipated to increase by about 70.0% over the next two decades. Cancer is affecting more than 14.0 million people each year.Technological advancements and integration of radiotherapy with other imaging methods resulted in efficient treatment option. Emergence of techniques such as Three-Dimensional Conformal Radiotherapy (3D-CRT), Intensity Modulated Radiation Therapy (IMRT), and Image-Guided and Stereotactic Radiation Therapy has opened effective treatment options with minimal adverse effect. For instance, dry mouth is the most common adverse effect of head and neck cancer treatment. However, 3D-CRT limits the damage to the salivary gland, which causes dry mouth.

According to the Global Health Observatory (GHO) statistics in 2015, premature deaths from cancer are expected to increase by 44.0% by 2030. These statistics indicate that there is remunerative opportunity in the field of cancer diagnostics and therapeutics, thereby opening avenues for existing & new market players.

External beam radiation therapy (EBRT) was the dominant product segment with more than 80.0% market share in 2016. EBRT is inclusive of electron emitting high-energy Linear Accelerators (LINAC), compact advanced, and proton beam therapy systems. EBRT is easy to deliver as radiologists can control the dose of radiotherapy.

Compact advanced radiotherapy systems such as CyberKnife, Gamma Knife, and tomotherapy have a wide range of applications. CyberKnife is a robotic radiosurgery system, used in the treatment of benign and malignant tumors. Gamma Knife is primarily used for the treatment of brain tumors. It utilizes high-intensity cobalt radiation in such a manner that it concentrates radiation in small volumes. Tomotherapy, also known as helical tomotherapy delivers radiation in slices using computed tomography (CT).

Proton therapy is one of the key types of EBRT and it is anticipated to gain substantial shares over the forecast period. Proton therapy is applied for a couple of disease categories, firstly the disease sites that respond well to the high dose of radiotherapy such as uveal melanoma. It is also applied when proton therapy is administered with higher precision by reducing dosage, mainly for pediatric patients.

Brachytherapy is likely to gain significant shares over the forecast period. In this method, radiation is delivered directly by placing radioactive implants at the cancer site. Factors likely to promote the growth include quicker recovery, reduction in Length of Stay (LoS) in hospital, and reduced risk of postoperative complications. Brachytherapy is widely used for the treatment of breast, prostate, and cervical cancer.

On the other hand, lung cancer treatment using EBRT is projected to achieve maximum development in the forthcoming years. Incidence of lung cancer is rising as a result of sedentary lifestyle, smoking, and increased pollution. EBRT can be used as primary treatment, before surgery to shrink tumor, after surgery to remove remnant tumor cells, and to treat lung cancer that has spread to the brain and other organs.

Applications of brachytherapy include treatment of prostate, gynecological, breast, cervical, penile, and other forms of cancer. Prostate cancer treatment using brachytherapy contributed to maximum share in 2016 and is expected to gain lucrative share of the radiation oncology market over the forecast period. This dominance can be attributed to rising awareness among men, availability of treatment centers, fewer complications, and reduced LoS.

The gynecological cancer segment is likely to expand at a healthy CAGR in the coming eight years. This category includes treatment of cervical, primary peritoneal, gestational trophoblastic disease, vulvar, and uterine cancer. Development of screening techniques such as Pap test that have widespread applications are allowing gynecologists to find out cancerous changes in ovaries and vagina. This has resulted in more women availing advanced treatments.

3D-CRT technology is anticipated to witness a lucrative CAGR of over 6.5% in the next eight years. In this technique, the radiation beams form the shape of cancer. This technique is the most suitable for tumors of irregular shapes and the ones close to healthy organs. Various medical imaging techniques such as CT, Magnetic Resonance Imaging (MRI), and Positron Emission Tomography (PET) are utilized to understand the shape and size of tumors, which are then conformed in beam through computer program.

Intensity modulated radiotherapy (IMRT) is an advanced type of precision radiotherapy method. This is a next-generation treatment line of the 3D-CRT. IMRT is one of the supreme radiotherapy technologies as it can conform the radiation volume at complex tumor locations. This method is efficient and poses lesser postoperative complications as the dose can be controlled. 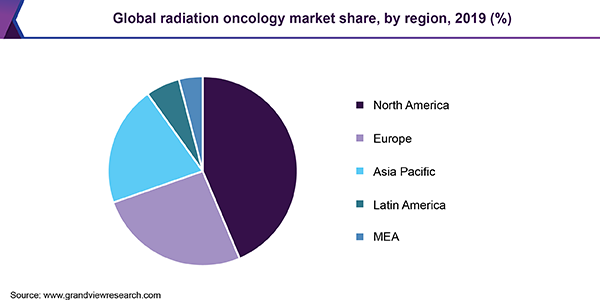 Image-guided radiation therapy (IGRT) contributed in technology with around 13.0% share in 2016. In this method, overall objective is to minimize exposure to the healthy surrounding tissues. To achieve greater accuracy, planning target volumes are calculated considering geographic uncertainties.

North America led global market for radiation oncology with over 40.0% share in 2016. This dominance can be attributed to advanced healthcare infrastructure, high healthcare expenditure, and greater research and development (R&D) efforts.

However, decline in the supply of isotopes has led to a hike in prices. Consequently, they are affordable for only a few people and would require out-of-pocket expenditure. Additionally, repercussions of uncertainty about healthcare policies and reforms in U.S. are likely to translate into market dynamics reducing investments in this vertical.

On the other hand, Asia Pacific is projected to witness a lucrative CAGR over the forecast period. Rise in aging population, urbanization, and increasing wealth in low- and middle-income countries like India and China have led to regional market growth.

Product portfolio and regional expansion, collaboration for R&D, partnerships for organic growth, and mergers and acquisitions are highlights of strategic undertakings in this market. For instance, in September 2015, Mallinckrodt Public Limited Company acquired Therakos, Inc. The former company aims to add depth and durability to its specialty brand segment and expand its geographic presence through this acquisition.

This report forecasts revenue growth at global, regional, and country levels and provides an analysis of the latest industry trends and opportunities in each of the sub-segments from 2014 to 2025. For the purpose of this study, Grand View Research has segmented the global radiation oncology market report on the basis of product, application, technology, and region: