Asia Pacific Video Streaming Market Size, Share & Trends Analysis Report By Streaming, By Solution, By Platform, By Service, By Application, By Revenue Model, By Deployment, By User, And Segments Forecasts, 2019 - 2025

The Asia Pacific video streaming market size was valued at USD 8,582.4 million in 2018 and is expected to register a CAGR of 20.7% from 2019 to 2025. Increased adoption of novel technologies such as blockchain and artificial intelligence to improve video streaming is expected to boost the growth prospects of the market over the forecast period. Furthermore, the growing adoption of cloud-based video streaming solutions for increasing the reach of video content is directly influencing the growth of the market. This trend is observed in numerous countries of the Asia Pacific region.

Cost reduction and innovations in the delivery of video services are also projected to play a marginal role in the growth of the market over the forecast period. To address the issue of lack of digital connectivity in the industry, market leaders are focusing on finding ways of improving coverage in areas lacking in basic infrastructure. Resultantly, developing countries in the Asia Pacific region are expected to experience rapid adoption of video services on mobile computing devices. 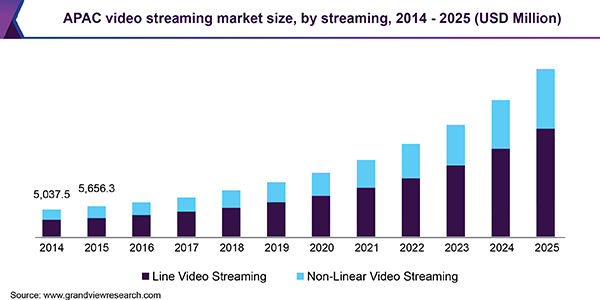 The growing use of smartphones with high-speed internet technologies such as 3G, 4G, and LTE has led to the increased consumption of digital data. A study by GSMA Intelligence suggests that 2.8 billion people, which is about 67% of the region’s population, had subscribed to mobile services by the end of 2018. Studies suggest that the rollout of the 5G technology is also on track and several countries in the region will switch to commercial 5G networks by the end of 2019.

High-speed internet technologies provide easy access to any form of video content on different networking platforms. Social media platforms such as Facebook, FaceTime, Google Hangout, Instagram, and Reddit provide easy access to videos and real-time entertainment services. The rising user base of these platforms also serves as a driver for video streaming services and is likely to work well in favor of the Asia Pacific video streaming market in the next few years. These trends have also led to a notable rise in the production of on-demand content services and are expected to drive the growth of the region’s video streaming market.

Based on application, the market has been segmented into real-time entertainment, web-browsing & advertising, gaming, social networking, e-learning, and others. The real-time management segment dominated the market in 2018 and is estimated to remain the dominant segment over the forecast period. 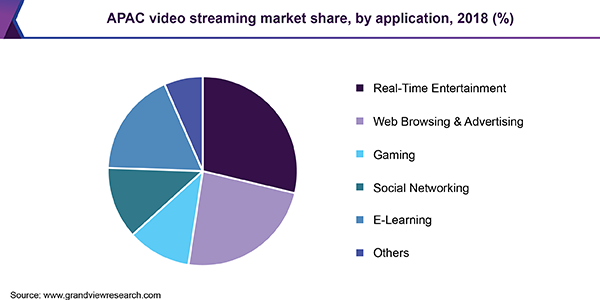 The gaming segment is also expected to expand at an impressive pace over the forecast period and accounts for a notable share of the market toward the end of the forecast period. This can be attributed to the rising number of streamers in the gaming industry who stream or broadcast their games where viewers can interact with them. Furthermore, streaming games from remote internet servers is expected to be the future growth perspective of the video game industry.

Based on the solution, the market has been segmented into Internet Protocol TV (IPTV), Over the Top (OTT), and Pay TV. An IPTV is a service platform that delivers live TV programs and on-demand content. OTT stands for Over The Top, a service platform that delivers film and TV content through the internet, without requiring the users to subscribe to a traditional cable service or Pay TV services. Pay-TV, also known as subscription television or premium television, is a subscription-based television service that delivers content through analog or digital cable. The OTT segment dominated the market in 2018 and is expected to retain its dominance over the forecast period owing to the rising number of subscribers of the service in the region. The OTT segment is also estimated to expand at a faster pace as compared to other segments over the forecast period.

The OTT segment delivers film and TV content through the internet, without the need for traditional cable service or Pay TV service subscription. Video streaming OTT services are gaining popularity in various end-use industries such as education, healthcare, and gaming. For instance, the rising subscribers of Netflix, along with OTT service providers such as subscription-based digital content providers such as Spotify and YouTube, have also contributed significantly to the growth of audio and video streaming services in the region. Furthermore, the increasing demand for improved automation of business processes and the wide availability of broadband infrastructure is expected to drive the growth of the OTT segment over the forecast period.

The smart TV segment is also projected to witness significant traction over the forecast period. Smart TVs are increasingly becoming popular among consumers as they provide easy access to the internet and enable connectivity with external devices. The gaming consoles and laptops & desktops segments are estimated to witness moderate growth prospects in the coming years.

Based on service, the market has been segmented into consulting, managed services, and training & support. The training & support segment dominated the market in 2018 and is estimated to remain the leading segment over the forecast period. This can be attributed to the fact that APAC is one of the top outsourcing destinations for several industries. Also, industries such as IT, telecom, BFSI, and healthcare have witnessed a steady rise in countries such as India, China, and Japan over the years. The resultant rise in the number of employees in these industries and the need for effective training programs is likely to drive the segment.

Enterprises face multiple challenges while training employees and employ a variety of mediums to make training programs more engaging and effective. For this, organizations are using live-streaming videos as part of their corporate training programs. Live-streaming content lends authenticity and enables more effective interaction with the audience, thus helping retain their attention and facilitating an enhanced training experience. Thus, the growing use of videos for corporate training is boosting the growth of the use of video streaming in the training & support service segment.

Based on the revenue model, the market has been segmented into advertising, rental, and subscription. The subscription segment dominated the market in 2018 and is estimated to remain dominant over the forecast period.

There is a growing demand for connected devices and consumer electronics that support digital media and high-speed internet technologies, allowing consumers to access video content anywhere across the globe. For online video streaming, an access fee or a subscription is often required. For example, Netflix offers various subscription programs for streaming videos online. The subscription model offers access to a wide range of video content including exclusive series. Therefore, the rising number of subscription-based services in the region is expected to lead to positive growth opportunities for the segment.

Based on deployment, the market has been segmented into the cloud and on-premise. The cloud segment dominated the market in 2018 and is estimated to remain dominant over the forecast period as well. In 2018, China dominated the cloud segment due to the rapid growth of cloud-based video streaming services in the country. Meanwhile, the Japan and India markets also accounted for notable revenue share. The cloud segment is expected to witness steady growth over the forecast period owing to the benefit of convenience offered in watching videos and growing need for original content

With the rising number of internet users in the Asia Pacific region, governments of different countries are collaborating with international organizations such as International Telecommunication Union (ITU) and Global System for Mobile Communications (GSMA) to improve internet connectivity and increase the use of cloud-based applications including video streaming. Such initiatives are expected to contribute positively to the cloud segment.

Based on the user, the Asia Pacific video streaming market has been segmented into residential and commercial. The commercial segment dominated the market in 2018 and is estimated to remain the dominant segment over the forecast period. The residential segment is estimated to register a high CAGR over the forecast period. The extensive adoption of digital media among mass audiences in the region has led to a notable shift in the apportioning of advertising expenditure in various Asia Pacific countries, from traditional media to digital media platforms.

Based on countries, the market has been segmented into China, India, Japan, South Korea, Australia, and Singapore. The Chinese market accounted for the largest market share in 2018 owing to the high subscriber base of video streaming platforms in the country. India and South Korea are expected to emerge as the leading countries in terms of growth in the region’s market in the next few years.

Liberalization of the telecom sector, the subsequent flow of substantial investment from mobile operators, and the competitive costs of several video streaming services are projected to drive the growth of the market in the Asia Pacific region. Companies such as Tencent, Baidu, and Alibaba, which are some of the leading market players in the television industry in China, are investing millions to create new content. However, Chinese content is in the early stages of global distribution. Therefore, the high cost of content creation could hamper the overall growth of the video streaming market.

Some of the leading APAC video streaming solution providers are Amazon Web Series, Inc., Google Inc., Microsoft Corporation, Netflix, Inc., and Tencent, iQIYI, Inc. among others. The market is expected to become more competitive over the forecast period as new entrants continue to foray into the market. Subsequently, the prices of video streaming services are expected to plummet as a result of the increasing competition in the regional market.

Leading companies are focusing on improving their product portfolio by expanding their product lines. For instance, in March 2019, iQIYI, Inc. announced the launch of 8K VR visual experience in collaboration with China Unicom (Hong Kong) Limited, a telecommunications operator. The companies would together produce customized virtual reality products.

This report forecasts revenue growth at the country level and provides an analysis of the latest industry trends in each of the sub-segments from 2019 to 2025. For this study, Grand View Research has segmented the Asia Pacific video streaming market report based on streaming, solution, platform, service, revenue model, deployment, user, application, and country.