The global attapulgite market size was valued at USD 281.1 million in 2019 and is expected to grow at a compound annual growth rate (CAGR) of 2.9% from 2020 to 2027. Increasing demand for attapulgite in the oil & gas application is projected to assist in the growth of the market. Attapulgite is a clay mineral consisting of magnesium-aluminum silicate. It is used as drilling fluids in the oil & gas sector, wherein firstly it is coated with a quaternary amine to make it oil dispersible. In addition, suspending agents made using attapulgite is used in saltwater applications, wherein it is used in drilling shaft to surround drill string and drill bit. The U.S. accounted for a revenue share of 49.6% in global attapulgite demand. The steady increase in domestic oil production played a key role in supporting the dynamics of the industry in the U.S. The product is used as an additive and in the formulation of drilling mud, which remained a key application category within the domestic oil & gas industry. 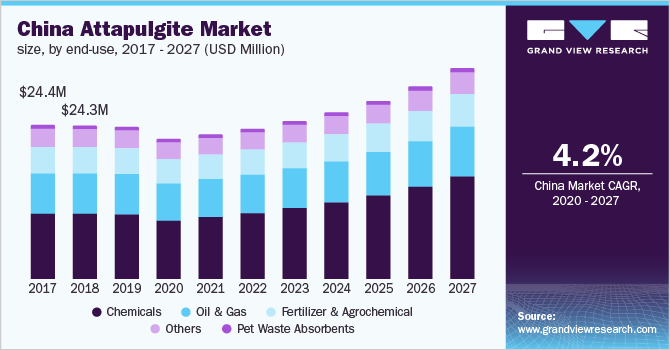 The country’s oil production increased from nearly 11,801 thousand barrels per day in 2014 to 17,045 thousand barrels per day in 2019. Another key end-use industry, which is projected to drive the attapulgite market growth in the U.S. is the regional chemical industry. The use of attapulgite clay to formulate value-added products is likely to gain prominence over the coming years. The use of the product as an additive in the formulation of adhesives, paints, and coatings is likely to gain popularity over the forecast period.

However, the coronavirus outbreak and the rising number of cases in the U.S. are likely to restrain the market transaction over the short term. Moreover, crashing international oil prices is projected to lay their weight on the regional oil & gas sector, thereby lowering the product demand in FY 2020.

The attapulgite market is expected to witness significant growth over the forecast period owing to the increasing global demand for oil & gas products and the manufacturing of absorbent products. Rising consumption by end-use industries including pet waste management, cosmetics, oil & gas, paints, and coatings, is expected to drive market growth. The gel quality attapulgite is used as drilling fluids, thus primarily it is coated with the quaternary amine to make it oil dispersible.

Rising E&P activities to recover hydrocarbon sources that are other than conventional such as tight gas, shale gas, and coalbed methane is likely to drive the growth of the attapulgite market over the forecast period. Continuous growth in non-conventional resources on a global level is expected to positively influence market growth.

Attapulgite mining can have an adverse impact on the ecosystem, similar to any other mining activity. These issues are associated with tailings and the removal of topsoil. Improper management of mining activities can have an unfavorable socio-economic impact. Addressing and finding solutions to these issues are of paramount importance. Clay mining leads to the introduction of large quantities of suspended particles into the air and water bodies. Dust particles settled on the surface of plants can hamper their growth. These particles may cause respiratory disorders in humans and animals.

The oil & gas was the largest end-use segment and accounted for a share of over 24% in 2019. The segment is likely to grow at a steady CAGR over the forecast period. In the oil & gas industry, attapulgite products are used in applications, such as drilling muds, thickening, suspension and clarifying agents, and absorbers. The products are primarily used in seawater and saltwater drilling operations. Bentonite shows poor performance in saltwater applications; in such conditions, gel-grade attapulgite is very useful.

In the recent past, the global oil & gas industry witnessed a slowdown owing to slow price gains and low crude oil prices. The oil price war between Russia and Saudi Arabia has resulted in higher inventories in 2020, which negatively affected crude oil prices. Amidst the COVID-19 pandemic, the demand for oil products has decreased significantly. The trend is projected to continue over the short-term, resulting in lower product demand.

Attapulgite products are used as binding agents in fertilizers and seed coatings. The use of these products forms suspension, which remains unaffected by salts, and thus improves crop yield in agriculture. It is also used in pesticides, insecticides, slow-releasing agents, animal feed, and many more applications specific to the agriculture industry

North America accounted for a revenue share of 53.9% in 2019. The steady growth in oil production in the U.S. since 2008 has created a positive impact on the attapulgite products. In the oil & gas sector, attapulgite is used in drilling muds, refining, and absorbents applications. 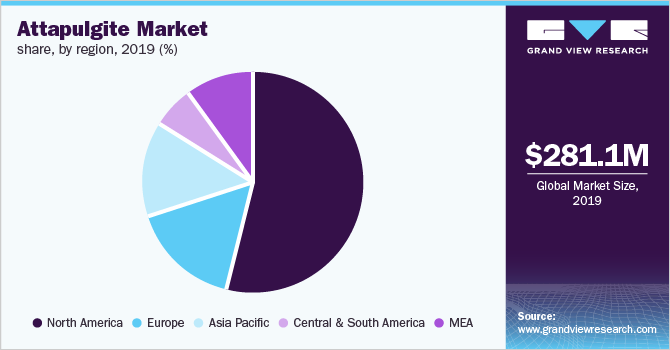 The U.S. has large deposits of attapulgite in Florida and Georgia states, wherein multinational companies such as BASF hold a prominent position in terms of market share. The country is among the leading producers and consumers of attapulgite minerals and related products. The demand for the product from refining & processing in the oil & gas industry is projected to assist in the market growth in the long run. The oil & gas application segment accounted for a volume share of 32.3% in 2019 in the U.S.

Asia Pacific attapulgite regional growth is largely based on its manufacturing powerhouses such as India and China. Asia Pacific is expected to be the fastest-growing market, denoting a CAGR of 3.7%, in terms of revenue over the forecast period. 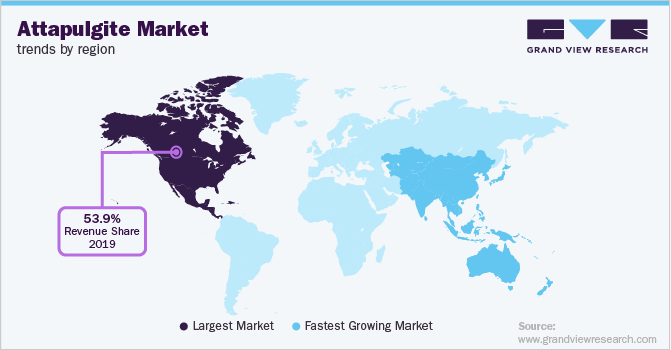 China constituted a volume share of 66.6% in the regional attapulgite marketspace in 2019 from 65.0% in 2018. Attapulgite market growth in China is primarily fueled by the domestic chemical sector. Formulation of value-added products is likely to remain the dominant application category for attapulgite over the forecast period.

The market is highly competitive due to the presence of a number of major companies, such as, BASF, Hudson Resources, Geohellas, which are involved in mining, processing, and sales of the products. Among these players, BASF holds a strategic position due to its integration across the value chain. BASF has quality resources of attapulgite, which are further processed and used in various applications. The company has vast experience and a wide presence across the world with operations in 80 countries. It has a reliable supply chain and a wide range of customers in various industries, such as paints & coatings, rubber, plastics, oil & gas, chemicals, and agriculture. Some of the prominent players in the attapulgite market include:

This report forecasts revenue growth at the global, regional, and country levels and provides an analysis of the latest industry trends in each of the sub-segments from 2016 to 2027. For the purpose of this study, Grand View Research has segmented the global attapulgite market report based on end-use and region: 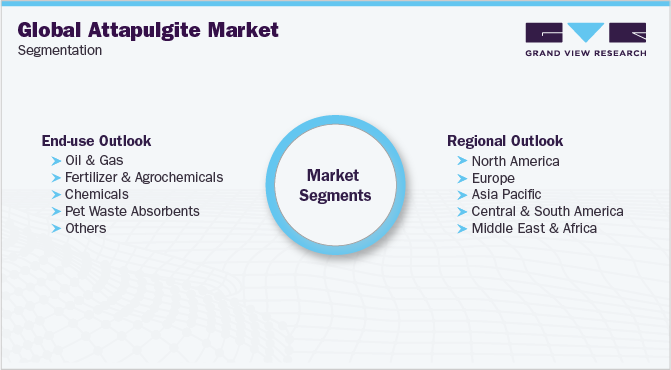 How big is the attapulgite market?

What is attapulgite market growth?

Which segment accounted for the largest attapulgite market share?

b. North America dominated the attapulgite market with a share of 61.8% in 2019, owing to its increasing demand from the oil & gas sector.

Who are the key players in the attapulgite market?

What are the factors driving the attapulgite market?

b. The key factors that are driving the attapulgite market include increasing the use of attapulgite absorbents in oil drilling and new product development for pet litter products.