The global plastics market size was valued at USD 522.66 billion in 2017. It is poised to expand at a CAGR of 4.0% during the forecast period. Increasing plastic consumption in the construction, automotive and electrical & electronics industries is projected to support market growth over the forecast period. Regulations to decrease gross vehicle weight to improve fuel efficiency and eventually reduce carbon emissions have promoted the use of plastics as a substitute to metals, including aluminum and steel, for manufacturing of automotive components.

The growth of the construction industry in emerging markets such as Brazil, China, India, and Mexico has been instrumental in fueling the demand for plastics during 2015 and 2016. The growth of the market can be attributed to increased foreign investment in these domestic construction markets, as a result of easing FDI norms and requirements for better public and industrial infrastructure. 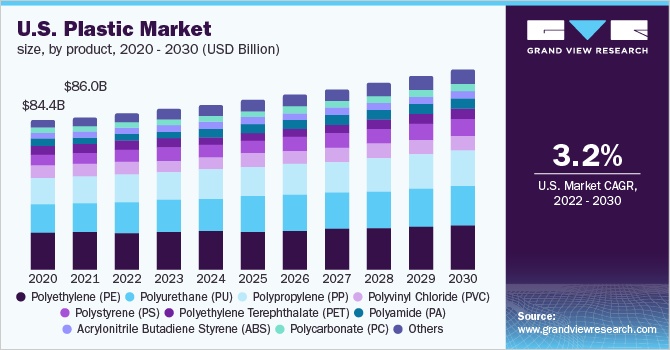 Stringent regulations regarding depletion and recyclability of conventional materials such as metal and wood are anticipated to drive greater plastics demand from construction industries in insulation, pipes, cables, floorings, windows, storage tanks, and others. Polymer fittings are also generally quite simple and easy to install, compared to metals or wood, with a wide range of color combinations, adding to their aesthetic appeal.

Polyether Ether Ketone (PEEK) is one of the promising product segments in terms of volume as well as value. They are widely used in engineering applications owing to its characteristics, which include being colorless and organic. Polyaromatic semi-crystalline thermoplastic is commonly used in medical applications due to its favorable mechanical properties.

Flourishing packaging industry, driven by high demand from consumers in emerging economies, is playing a vital role in stirring up the demand for plastics such as polyethylene and PET. The packaging industry is estimated to be the most prominent application segment in the plastics market throughout the forecast period. The segment will account for more 35.0% of the overall revenue by 2025.

Various regulatory bodies have stipulated guidelines regarding packaging materials in food contact applications. Bisphenol-A (BPA), which is often employed to produce plastics and epoxy resins, has been under various regulatory scrutinies, mainly due to its abundant presence in plastics which is used in packaging such as PVC and polycarbonate. 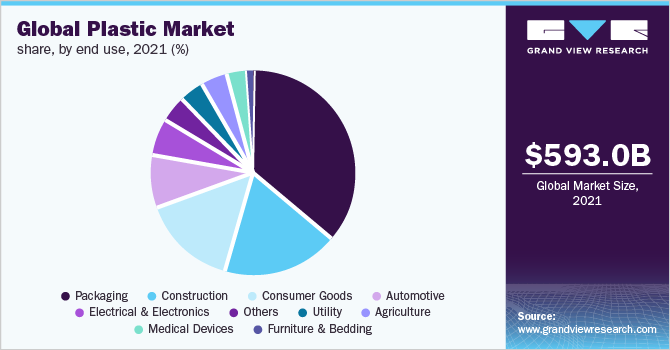 Plastics composed of BPA breakdown when they are washed, heated, or stressed and can contaminate food and water through leaching from packaging lining. This occurrence has prompted regulatory bodies and other institutes to conduct scientific studies on them while regulatory agencies such as FDA and EFSA have established a partial ban and approved content. However, for general usage, BPA has been considered to be safe for human health and environment when used as intended (preventing it from contaminating food).

Asia Pacific (excluding China) was the fastest growing regional market with plastic valued at USD 105.39 billion in 2017. Rapid industrialization and increased skilled workforce are benefitting the growth of the manufacturing sector in the region, which in turn is boosting the demand for plastics. High economic development and consequent rise in consumer spending in emerging economies such as India and Japan along with Southeast Asian countries are further fueling the demand for consumer goods.

In addition, a well-established electrical & electronics manufacturing base in Taiwan and South Korea is anticipated to augur well for the market in the region. India, on the other hand, has a strong chemical industry, which strengthened its production in the last few years. Rapid urbanization, coupled with burgeoning manufacturing ecosphere, growing economies, and increasing infrastructural activities are supporting the growth of the market in Asia Pacific. Countries such as China, India, Vietnam, Indonesia, and the Philippines are witnessing a rapid GDP growth and offer lucrative opportunities for manufacturers.

Companies are heavily investing in capacity expansion coupled with research & development to have a balanced product portfolio. This is supported by the fact that in March 2017, BASF SE announced to build a new polymer additives plant at its Caojing site in Shanghai, with an investment of USD 217 million. The strategy comes as a part of BASF’s previous announcement to invest over EUR 200 million (USD 213.2 million) to increase its production network for polymer additives.

In February 2018, SABIC also announced projects in the Netherlands and Asia aimed at expanding its global capacity for two of its high-performance engineering thermoplastic materials, Noryl and Ultem resins. The planned new production facility in Singapore is likely to go online by the first half of 2021. The organization has also proposed to recommission operations at its Netherlands-based Bergen Op Zoom PPE resin plant by the end of this year to produce polyphenylene ether (PPE), which is the base resin for its Noryl resins and other oligomers.

This report forecasts volume and revenue growth at global, regional, and country levels and provides an analysis of industry trends in each of the sub-segments from 2014 to 2025. For the purpose of this study, Grand View Research has segmented the global plastics market report on the basis of product, application, and region: