The increasing awareness among consumers, extensive R&D by market players, and updated ratings of safety agencies have fueled the automatic emergency braking market growth. Some major automakers have already started to integrate the basic automatic emergency braking systems as optional and standard options into their mass-market models. The technological advancement in the image sensing technology and decrease in the price of cameras are driving the adoption of automotive cameras worldwide. However, the costs associated with the manufacturing of cars equipped with AEB and Collision Warning Systems (CWS), are substantial as well as uncertain, which will hinder the growth of the market.

The manufacturers of the automatic emergency braking system establish relationships with several OEMs and test & assembly subcontractors to enhance flexibility and cost-effectiveness in meeting the manufacturing needs. Sensors are chosen on the basis of device types, such as charged coupled device or complementary metal-oxide semiconductor, resolution, dynamic range, field of view, speed, and sensitivity. 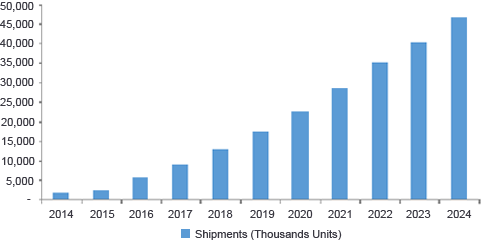 As system failures could be disastrous to both car occupiers and other road users, all acute components will have to meet the substantial manufacturing, repair, installation, testing, and maintenance standards, which would be an expensive affair.

The North American regional market dominates the global automatic emergency braking industry over the forecast period. The regulatory scenario of the North American region that mandates the installation of AEB systems in the LCV and HCV vehicles is anticipated to be the prime cause for the surge in AEB installations. Furthermore, the surge in the number of autonomous car sales in the U.S. is expected to be a key factor for the early AEB system adoption in the region.

The horizontal integration in the industry has contributed toward enhancing the market share. The declining profits of automotive part suppliers have led to a spin-off or sale of the company to OEMs that prefer having in-house operations as they offer greater flexibility for delivery and price, along with customized solutions for their vehicles. In February 2016, Luxoft Holding, Inc., a software development service vendor, acquired Symtavision GmbH, a provider of automotive software tools and consulting services focused on architecture optimization, scheduling analysis, and timing verification.

The AEB systems market has witnessed a sharp growth owing to the rising sales of luxury auto. The continued growth in the motor vehicle production and associated regional norms pertaining to automotive safety have been instrumental in driving the growth of the AEB market.

Canada is anticipated to walk the footsteps of the U.S. and is expected to begin the trials of autonomous cars in 2017 and beta launch in Ontario in 2019, which would briefly commensurate AEB sales in the region. From November 1, 2015, the European Union (EU) legislation has regulated the mandatory installation of AEB systems for all the registered HGVs over 7.5 tons.

The costs associated with the manufacturing of cars, equipped with automatic emergency braking and Collision Warning Systems (CWS), are substantial as well as uncertain. They require a range of superior sensors, processors, and controls, which presently cost tens of thousands of dollars. The industry players are constantly investing in R&D to develop the innovative braking system to gain market share and stay ahead of competition. The key industry competitors include Audi (Germany), Bayerische Motoren Werke AG (BMW) (Germany), and Daimler AG (Germany).

In December 2014, The Pedestrian Warning with City Braking Activation from BMW ConnectedDrive received the Euro NCAP Advanced award 2014. The award complemented the assessment system with its top five-star rating that is widely recognized across Europe while considering the advanced safety features whose function surpasses the requirements of the Euro NCAP tests.

In May 2014, Mercedes-Benz added a radar sensor system that screens the distance from other vehicles to its 2014 model-year M-Class mid-size luxury SUV. The third-generation M-Class is available in four models, including an ML350 with bi-turbo ML550 with V-8, V-6 gasoline engine, ML350 BlueTEC diesel, and high-performance ML63 AMG.