The global automotive natural gas vehicle (NGV) market demand was estimated at 24,400.00 thousand units in 2017. It is expected to exhibit a CAGR of 3.0% during the forecast period. Rising support from several governments worldwide for the adoption of NGVs is one of the primary growth stimulants for the market.

Stringent regulations, laid down by governments of various nations, focus on reduction of emissions of greenhouse gases and particulate matter from vehicles in order to curb environmental damage. Along with these regulations, authorities have also been amending emission standard policies dynamically in order to protect the environment. This, in turn, is projected to positively influence the growth of the market over the forecast period. 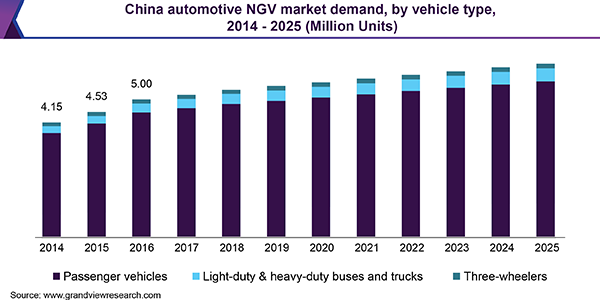 Incumbents of the automotive industry are enhancing their product portfolio and providing compressed natural gas (CNG) and liquefied natural gas (LNG) variants of vehicles in order to comply with evolving policies and standards. Surging demand for vehicles running on CNG and LNG coupled with increasing launches of a variety of natural gas vehicles is likely to propel the market.

Production of natural gas is becoming a safer process as authorities have been implementing strict regulations and industry standards to ensure safe production, storage, transportation, distribution, and use of natural gas. Technological advancements and government support have provided a push to the natural gas industry over the last decade. As a result, improved production and handling processes of natural gas are estimated to augment the market over the forecast period.

Based on vehicle type, the automotive NGV market has been classified into passenger vehicles, three wheelers, and light-duty & heavy-duty buses and trucks. The passenger vehicles segment dominated the market in 2017. Countries such as Thailand, India, and Bangladesh have a greater number of three-wheelers that run on natural gas in circulation.

CNG and LNG find prominent applications in the rail transport sector in countries such as India, U.S., Canada, and Japan. For instance, Florida East Coast Railway (FECR) of North America converted its locomotive fleet to LNG by modifying its GE ES44AC locomotives. Use of natural gas as a fuel for locomotives is still being studied by a few rail companies. Nevertheless, there is a growing potential for natural gas as a fuel for locomotives, considering ongoing research & development activities across countries.

Leading companies in the marine industry, such as British Columbia Ferry Services Inc.; Viking Line Abp; and Tarbit Shipping AB, are producing vessels that are capable of running on LNG. As a result, the marine industry is posting a spiraling demand for natural gas.

Based on fuel type, the market has been bifurcated into CNG and LNG. The LNG segment is poised to register a higher CAGR during the forecast period owing to increasing use of LNG in the locomotive and aviation industries.

The CNG segment is anticipated to dominate the market throughout the same horizon, owing to growing government initiatives. Having realized high initial costs associated with adoption of LNG and CNG vehicles, governments and authorities across the globe are launching various incentive programs in order to simplify process of adoption of such vehicles. 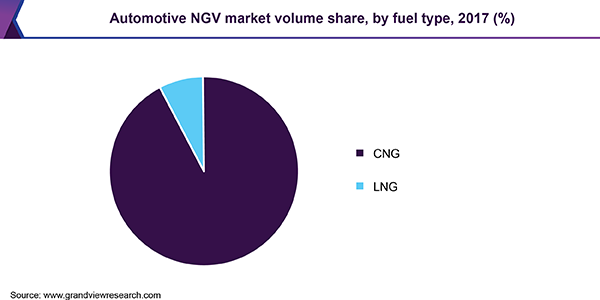 Owing to several technological innovations in the trucking sector in recent times, there is a rising interest towards LNG as a fuel for heavy-duty trucks. Many truck fleets from the transportation sector are switching to alternative fuel technologies to comply with stringent government regulations concerning the environment. As a result, NGV manufacturers are focusing on LNG trucks that were previously not in demand. Many companies in the transportation sector are testing LNG trucks for haulage since these vehicles are cost-effective and have lower carbon emissions as compared to those with diesel engines.

Concurrent extraction and discovery of large quantities of natural gas in Canada and the U.S. have led ship owners to consider switching to natural gas. The Great Lakes Maritime Research Institute has been involved in a study supported by industries and government agencies to promote acceptance of natural gas as a primary fuel for U.S. Great Lakes vessels.

Asia Pacific is estimated to emerge as the largest adopter of NGVs during the forecast period on account of development of natural gas infrastructure in countries such as China, India, and Pakistan. Additionally, stringent government policies concerning the environment are poised to spur the growth of the Asia Pacific market.

Robust growth of commercial sectors such as transport and construction is providing an upthrust to the overall market. Rising adoption of economic fuel alternatives such as CNG and LNG in the trucking sector, development of natural gas refueling infrastructure along transport routes, and conversion of fleet vehicles from diesel-based to natural gas-based are some of the key trends stimulating market growth. Additionally, governments are encouraging the use of alternative fuel technologies in vehicles.

Key players operating in the market include AB Volvo; Cummins, Inc.; Beiqi Foton Motor Co., Ltd.; Navistar, Inc.; PACCAR, Inc.; and Westport Fuel Systems Inc. Suppliers in the value chain of the automotive market are chosen according to their offerings and quality standards to ensure that final quality of assembled vehicle meet expectations. Selection of suppliers is carried out through various means, such as direct negotiations, reverse auctions, or competitive bidding. A crucial component that makes up an NGV is the natural gas engine. Companies such as Cummins Westport, Inc. and Weichai Westport, Inc. design and build CNG engines and LNG engines, along with engines running on other alternative fuels.

This report forecasts revenue growth at the global, regional, & country levels and provides an analysis of industry trends in each of the sub-segments over the forecast period. For the purpose of the study, Grand View Research has segmented the global automotive NGV market report on the basis of fuel type, vehicle type, and region: