For instance, out of the 123 million women in the U.S., about 47.0% of women accounted for the labor force. Women were projected to account for 51.0% of the total workforce by 2018. This factor has been driving the demand for various baby drinks to support the nutritional requirement of infants. 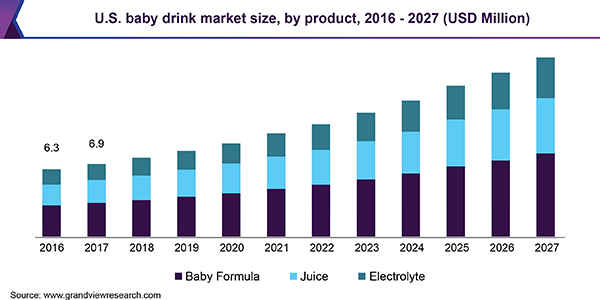 At a global level, more than 45% of women are at salaried positions, wherein most of the young women are shifting toward non-traditional professional jobs. An increase in women’s labor force participation by 10% is thereby expected to add USD 700 billion to India’s GDP by 2025, which is equal to an increase of about 1.4%. This, in turn, is expected to boost the demand for baby drinks to feed the infants.

Based on the product, the baby formula segment is expected to gain traction among consumers, as it aims to satisfy the nutritional requirements of infants aged between 0 to 3 years. Infant formula acts as a substitute for human breast milk owing to its similar nutritional composition. Baby formula is widely available in various forms including powder, liquid, and ready to consume.

The rising adoption of baby drinks in multiple countries is driving the market. For instance, the U.S. government is supporting the special supplemental nutrition program for Women, Infants, and Children (WIC). Also, companies are using their marketing techniques to increase sales in Asia, Africa, and Latin America. For instance, companies are advertising on the radio and in newspapers, and are providing free samples of baby drinks, especially baby formula, to mothers and service providers through healthcare facilities and “milk nurses” appointed by the companies as sales representatives.

Consumers’ purchase decisions are influenced by a number of factors such as nutritional content, safety standards of the product, and price when it comes to baby drinks. Keeping these factors in consideration, the manufacturers are focusing on offering high-quality products with maximum nutrition levels. A noticeable change in the distribution channel is also observed, as the consumers prefer online platforms to purchase baby drinks attributed to the convenience and availability of a wide range of products for comparison.

As per the United States Federal Food, Drug, and Cosmetic Act (FFDCA), infant formula manufacturers should meet some standard requirements for selling their products in the U.S. According to these standards, infant formula should contain all 29 essential components required to maintain nutrition levels in infants.

In China, infant formula is supervised under the Food Safety Law, amended in the last 3 years. Due to the melamine scandal in 2008, the consumption of adulterated infant formula had resulted in the development of kidney stones and other complications in around 30,000 babies. Thus, the government had passed stringent regulations for infant formula manufacturing and marketing in China.

Based on product, the demand for baby formula is significantly high in the Asia Pacific, particularly in China. Dairy producers in New Zealand supply approximately 80% to 90% of China’s milk powders. However, China has been looking for alternative suppliers from Europe and the U.S. due to the soaring demand for infant milk formula and is expanding its reliability network. China’s infant milk formula accounts for the highest share in the APAC region and is expected to continue to maintain stable growth. This, in turn, is contributing to the growth of the baby drinks market in the next few years. Some of the leading brands of infant milk formula include Similac and Enfamil.

The use of follow-on milk formula is mostly common among British mothers, who prefer using human milk substitutes from the very beginning. Aptamil offers a wide range of follow-on milk formulas with Pronutra-ADVANCE that includes a blend of ingredients induced with vitamin D. Their products aim to support the normal functioning of the infant’s immune system. With the growing awareness about organic products, the working mothers are gradually shifting to organic baby drinks, milk formula being one of them. For instance, NAN Organic 3 is a premium organic milk drink by Nestlé, designed for toddlers.

Pharmacies are trusted by consumers for baby nutrition products due to safety concerns. They form the major point of sales of baby drinks due to the stringent regulations regarding stocking and sales of medically approved products. Moreover, the presence of pharmacists helps consumers in seeking advice, which is an added advantage. For instance, according to the India E-pharmacy market Opportunity Outlook 2024 report, at present, India has over 850,000 independent pharmacy retail stores that cater to only 60% of total domestic demand. The supply gap is expected to offer lucrative opportunities for more pharmacy stores to support the demand for various baby products. 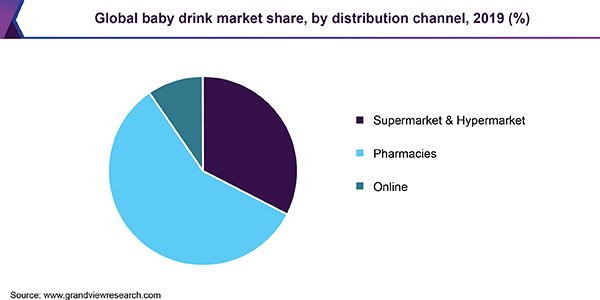 The supermarkets and hypermarkets segment is expected to witness a CAGR of 8.8% in the next few years. Major companies have started offering a broad range of baby drinks through supermarkets and hypermarkets. Moreover, the sales strategies such as discounts, buy one, get one offers, and complimentary products attract more consumers. This is expected to drive the increasing sales of baby drinks as they are always in high demand among consumers.

In the Asia Pacific, the demand for baby drinks, especially baby formula is high. According to Euromilk.org in 2015, the consumption of infant formula in China was around 750,000 tons and is expected to add about 825,000 tons by 2020 with a CAGR of around 16.0% over the forecast period. Hence, the presence of a large customer base coupled with the increasing women workforce in this region will further escalate the demand for baby products over the forecast period.

In North America, the market for baby drinks is expected to witness significant growth due to the presence of key players such as The Kraft Heinz Company, Abbott, and Mead Johnson and Company LLC in the region. These players are actively involved in product development and innovative marketing campaigns, through both offline and online formats to ensure the enhanced sales of the product in the market. The rising number of working women population in the region drives the concerns over the need for baby food products with proper nutrition in the market for baby drinks. For instance, the percentage of working women in Canada increased to 47.2% from 44.1% in 1990. Furthermore, several companies are actively engaging themselves in promoting the usage of these products based on the additional nutritional ingredients and convenience factors. However, the rising demand for specialty milk is attributed to the growing concerns of the parents about the healthy well-being of the child. The factor is anticipated to drive the sales of baby drinks over the forecast period.

The global market for baby drinks has witnessed substantial consolidation, which has resulted in a scenario wherein four multi-national companies dominate the industry. Globally the major companies account for more than 50% of the market revenue with the help of consistent product launches and regular modifications in terms of enhancing the nutritional value of the products.

For instance, Arla Foods Ingredients had launched an optimized comfort concept for infant formula which contains alpha-lactalbumin. This new product is induced with the most abundant protein found in human milk. Owing to its strong amino acid composition, alpha-lactalbumin is regarded as a high-quality protein value that forms the key ingredient, especially in formulas having a low-nutritional levels.

This report forecasts revenue growth at global, regional, and country levels and provides an analysis of the latest industry trends in each of the sub-segments from 2016 to 2027. For the purpose of this study, Grand View Research has segmented the global baby drinks market report on the basis of product, distribution channel, and region: