The global barge transportation market size was valued at USD 107.8 billion in 2017 and is expected to grow at a compound annual growth rate (CAGR) of 3.4% from 2018 to 2025. Rising demand for petrochemical products across developed as well as developing countries, including the U.S., China, and Germany, is one of the primary growth stimulants for the market. Benefits associated with barge transportation in terms of costs, efficiency, and safety and security of cargo are also expected to propel the market. 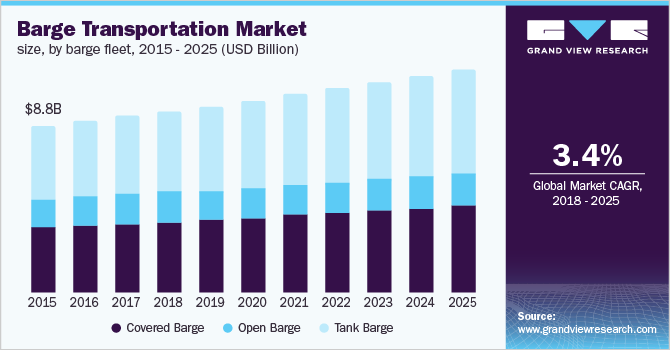 Growing export and import trade coupled with improving economic conditions in most parts of the world are particularly playing a significant role in stimulating market growth. Increasing domestic trade is boosting the need for an efficient mode of transportation. Barge transportation can particularly cater to this need. Additionally, advancements in barge manufacturing technologies are anticipated to further trigger the growth of the market over the forecast period.

The market holds immense growth potential over the forecast period owing to several factors, including increasing investments and initiatives undertaken by various governments for the development of effective inland water infrastructure and research activities undertaken by major industry incumbents to develop new designs and upgrade existing designs of barges. For instance, hybrid LNG barges can be considered a fuel-efficient and environment-friendly alternative to conventional diesel-fired ones.

Barges can be majorly divided into three types, namely covered, open, and tank. The covered type is primarily used to haul dry goods such as agricultural produce, pharmaceutical products, and electronic & digital appliances. On the other hand, tank ones are used to transporting commodities such as crude oil, petrochemicals, and liquid chemicals as well as food pulps and juices. The rising demand for petrochemicals is estimated to stir up the demand for tank barges over the forecast period.

Barges offer a large haulage capacity. For instance, a river barge can carry approximately 1,500 tons of goods, which is 15 times as much as a 100-ton jumbo hopper railroad car and 60 times as much as a trailer truck with a 25-ton carrying capacity can carry. They can, thus, be considered an ideal mode of transport for hauling commodities in bulk. Clearly, industries requiring to transport goods in large quantities are preferring barge transportation. Large haulage capacity coupled with lower operating costs is supporting the growth of the market.

The rising need for cost-effective conveyance and increased trading of metal ores around the world are likely to drive industry expansion. The low-cost and high-demand properties of barge transportation enable it to occupy a majority of the market. Several benefits, including protection of the cargo from extreme and unpredictable weather conditions, are propelling the global market forward. Owing to an increase in the regional and international markets of metal ores, metal ore is expected to account for a significant industry share during the projection period. Furthermore, rising automobile sales and construction activities drive up the profit for metal ores. This is expected to advance the market further.

In addition, increased government assistance for the construction of regional waterways facilities is expected to boost industry growth and create profitable opportunities for industry advancement. However, the high capital expenditures related to barge transportation limits the industry expansion.

In terms of the type of cargo, the market is classified into liquid cargo, gaseous cargo, and dry cargo. The liquid cargo segment covers the carriage of petrochemicals, refined petroleum products, pressurized products, liquid fertilizers, and black oil products, among others. Gaseous cargo involves the transportation of products such as LPG and CNG. The dry cargo segment covers the carriage of commodities such as coal, fertilizers, and grains.

Dry cargo is estimated to dominate the industry through 2025 owing to large quantities of coal as well as growing volumes of agricultural products being transported in barges. However, dwindling demand for coal is poised to hinder the growth of the segment over the coming years. On the other hand, the liquid cargo segment is likely to register a significant CAGR over the forecast period owing to the burgeoning demand for petrochemicals and the increasing production of shale oil in the U.S.

Some of the primary application areas of barge transportation are coal, crude and petroleum products, liquid chemicals, food pulp, and other liquids, agricultural products, metal ores, and fabricated metal products, pharmaceuticals, dry and gaseous chemicals, LPG, CNG, and other gaseous products, and electronics and digital equipment. The crude and petroleum segment is expected to be at the forefront of the market throughout the forecast horizon as the demand for coal continues to plummet. Besides this, growing demand for crude oil and increasing production of ethanol is promoting the growth of the segment.

Coal consumption has declined in recent times owing to stringent regulations being drafted by various governments to curb air pollution and prevent environmental damages caused by burning it. At the same time, the adoption of cleaner and low-cost fuels, such as natural gas, has been rising.

Based on the barge fleet, the market is divided into covered, open, and tank. The tank segment dominated the market in 2017 and is likely to reach USD 66.6 billion by 2025. The growth of the segment can be primarily attributed to spiraling demand for crude oil and petrochemicals. Additionally, several governments are encouraging the use of barges for transporting liquids to prevent events involving the spillage of hazardous chemicals on roadways.

The covered segment is projected to witness a noteworthy CAGR during the forecast period owing to the growing adoption of covered types for hauling agricultural produce in bulk quantities. Agricultural production has been on a rise in developed as well as developing countries. An active and efficient mode of transport would be necessary to haul all this agricultural produce. 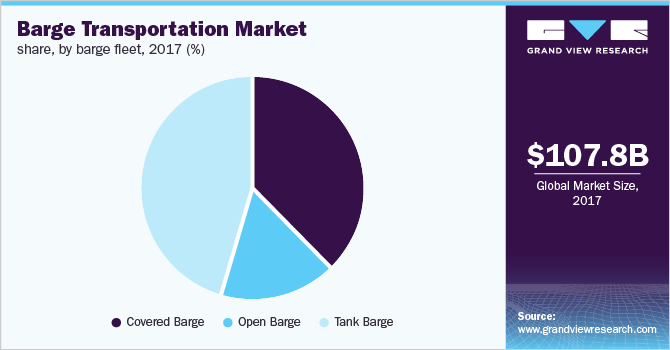 Covered barges can be used to transport agricultural produce in an effective manner while also reducing the overall costs of transportation. The trend is particularly evident in the U.S., where barge transport businesses tend to report strong financial numbers for third and fourth quarters owing to the grain harvesting season.

North America is anticipated to exhibit the highest CAGR of 4.3% over the forecast period. A well-established inland waterway infrastructure in the U.S. is driving the market in North America. The U.S. happens to be a resource-rich nation, which needs a reliable transport network. As a result, it has a significantly developed infrastructure of locks and dams, water storage reservoirs, hydroelectric power, levees, and other facilities, which bodes well for the industry. The rise in the production of shale oil in the U.S. is also creating immense opportunities for barge transportation. 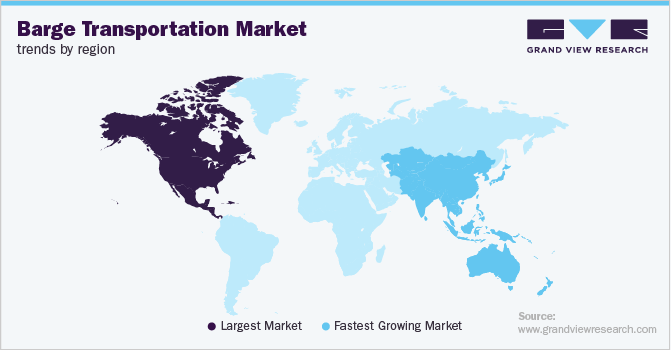 Europe is estimated to be the leading revenue contributor in the global arena throughout the forecasting arena. Factors such as improving economic conditions and a well-established network of inland waterways are triggering the demand for barges. The Netherlands boasts well-developed waterways. Besides, the Dutch government has undertaken various initiatives for the development of barge transportation in the country. As a result, the Netherlands is poised to hold a significant share in the Europe market.

Asia Pacific is likely to emerge as the second most promising region during the same period owing to major steps taken by various governments to develop inland waterways coupled with a rapidly improving regional economy and rising import and export trade. China is projected to post a CAGR of 2.9% over the forecast period. An abundance of water resources and an extensive waterway network totaling over 24,000 km, comprising the Grand Canal, Yangtze River, and several other canals and tributaries, are expected to contribute to the growth of the region.

The market is highly competitive in nature owing to the presence of several players. Increasing spending on R&D activities by major players is resulting in the development of new technologies and improvements in operations of the fleet, which is expected to intensify the competition. Several unorganized players, particularly independent barge service providers active in the domestic marketplace and focusing on inland transport, also have a strong presence in the marketplace. There are several players operating in North America and Europe.

Some of the prominent players in the barge transportation market include:

This report forecasts revenue growth at the global, regional, and country levels and provides an analysis of industry trends in each of the sub-segments from 2014 to 2025. For the purpose of this study, Grand View Research has segmented the global barge transportation market report based on type of cargo, barge fleet, application, barge activities, and region: 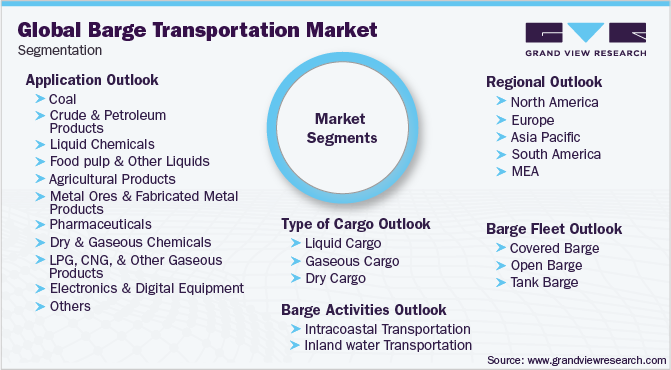 How big is the barge transportation market?

What is the barge transportation market growth?

Which segment accounted for the largest barge transportation market share?

b. Europe dominated the barge transportation market with a share of 35.0% in 2019. This is attributable to the improving economic conditions and a well-established network of inland waterways.

Who are the key companies/players in barge transportation market?

What are the factors driving the barge transportation market?

b. Key factors that are driving the market growth include rising demand for petrochemical products worldwide and the benefits associated with barge transportation in terms of costs, efficiency, and safety and security of cargo.