The global base oil market size was valued at USD 24.8 billion in 2019 and is expected to grow at a compound annual growth rate (CAGR) of 5.1% from 2020 to 2027. Rising demand of Group I and Group II base oils in the automotive industry is projected to remain a key driving factor for market growth. Base oils are a major constituent of any lubricant which helps them to obtain different specifications such as viscosity, pour point, oxidation, thermal stability, seal compatibility, and additive solubility. The product is generally refined via multiple processing technologies that include conventional refining and other advanced refining techniques. Growing demand for industrial lubricants, greases, hydraulic fluids, thermal oils, and metalworking fluids made from raw stock fluids such as base oil is expected to fuel the growth of the market for base oil. 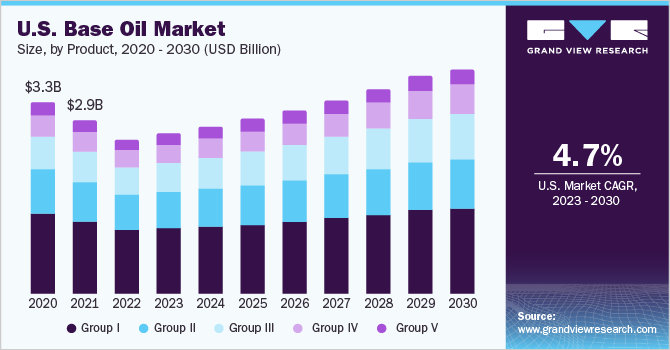 In light of the recent COVID-19 global pandemic, the demand for the product has been turbulent in 2020 due to supply chain disruptions associated with key feedstocks and a decline in demand from end-use markets. Crude oil availability and prices have been disruptive since early 2020 due to the virus outbreak which hampered the movement of the end-use market spectrum including, the industrial and automotive sectors. This led to the uneven supply of feedstocks and eventually slower-paced movement of application industries.

Moreover, the overall demand for lubricants is observed to be sluggish which is a reflection of projected low operating rates of base oil worldwide, since every lubricant is produced from the base oils. Further, the group I products are typically observed to be on top of the manufacturing price curve since the majority of the lubricant formulators lack group II and III production facilities. Therefore, for non-lubricant product formulations, application market participants highly depend on group II and group III products.

From a technological standpoint, the market for base oil has reflected significant changes since the past decade with manufacturers constantly investing in R&D activities to expand their portfolio. For instance, Gas-To-Liquid technology has been successfully commercialized with a rise in existing as well as planned capacity expansion worldwide. The GTL technology is considered to be promising with high industry opportunities to formulate premium lubricating oils through isomerization and existing catalytic hydrocracking processes.

Furthermore, several new GTL units are in the construction pipeline, with about 404,100 b/cd in additional capacity during the forecast period. Over 50.0% of the global GTL capacity is likely to be located in the Middle East, specifically in Qatar, UAE, with others in the Asia Pacific, Western Europe, and North America. These regions are thus expected to continue being a primary source for high-quality lubricant suppliers.

In terms of volume, the group 1 segment dominated the market for base oil with a share of 51.7% in 2019. This is attributable to the high demand for the product from an array of industries worldwide due to their characteristics as well as price. According to the American Petroleum Institute (API), group I base oils are classified as the ones containing less than 90.0% saturates along with a sulfur content of more than 0.03% offering viscosity index between the range of 80 and 120. Group I product is typically 90.0% base oil and 10.0% additive composition. It usually consists of conventional petro-based products. Since these oils are produced by solvent refining, which is a comparatively easy process, the oils are available at a very low cost in the market.

Group II base oils are commonly used in mineral-based motor oils available in the market. Since hydrocarbon molecules are saturated for these oils, they tend to offer better antioxidant properties. Additionally, they are clearer than group 1 oil. However, they cost more than group I counterparts owing to the change in the production process for both these categories. Group II products are also known for performance in lubrication such as volatility and stability in oxidation.

The market is witnessing capacity expansions for group II base oil particularly in Europe and the Asia Pacific. For instance, in September 2014, Hyundai and Shell Base Oil Co. set up a new base oil manufacturing unit in South Korea. The plant is known to have group II product formulating capacity of 650,000 tons per year. The Middle East and Africa, particularly Abu Dhabi also witnessed a considerable capacity expansion in 2015 along with China and Singapore.

In terms of volume, automotive applications dominated the base oil market with a share of 44.2% in 2019. This is attributable to the advent of technology in the automotive sector such as automation along with exceptional performance offered by luxury vehicles. Expanding the middle-class population along with the growing number of the young population requiring vehicles to commute is expected to drive automotive demand, thereby fueling the growth of the market for base oil.

Automotive oils, also called motor oils, demand around half of the base oil production with specific requirements for physical and chemical properties. Therefore, refiners design the aforementioned properties of their product formulations within the capabilities of processing but at the same time meeting the performance requirements of automotive oil.

Mature economies of North America and Europe are shifting their production facilities towards Asia Pacific countries owing to the availability of low-cost labor along with ample land. Moreover, continuously expanding population along with the increasing middle-class groups with higher real income and purchasing power has stimulated the demand for vehicles. Easy availability of loans and wide sources of funding have made vehicles affordable for the most part of the population.

Process oils are used either as raw material or as a processing aid in numerous industries. They are extensively utilized in technical and chemical industries primarily to enhance the manufacturing processes. Additionally, growing chemical processors across China, India, South Korea, and Japan are projected to drive demand for base oil across the Asia Pacific.

Asia Pacific dominated the market for base oil and accounted for 49.3% of the global revenue in 2019. This is attributable to the adoption of the product in the automotive and industrial manufacturing sectors of emerging economies such as China, India, and South East Asia. Furthermore, favorable regulations aimed at promoting fuel efficiency from vehicles and industrial machines are expected to fuel the growth of the market for base oils over the next couple of years.

China is particularly a rich country owing to the presence of natural resources. The country is experiencing an increasing demand for industrial goods along with automobiles within the country and from the outside. It is home to a large chunk of the population while the economy is expected to improve at a considerable rate over the future. The country offers the availability of skilled labor at a low cost and is characterized by numerous manufacturing facilities thriving to become the world’s largest exporter of all essential commodities. 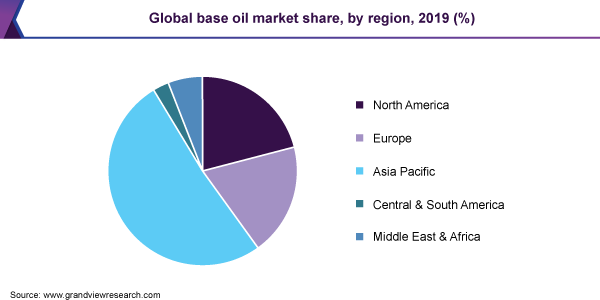 Further, the demand for fuel-efficient vehicles is on the rise in Europe, owing to the implementation of stringent regulations such as the European Union Automotive Fuel Policy, and the EU Directives under which Regulation No 443/2009 set the average CO2 emissions target for new passenger cars at 130 grams per kilometer. The presence of advanced processing technologies and increasing R&D efforts in developed countries such as the U.K., Germany, and France are expected to be other favorable factors driving the industry. The development of unique, high-performance lubricants using base oil is anticipated to drive the demand for base oil in the automotive, industrial machinery, and other sectors.

The market for base oil, from a global perspective, is highly competitive with the presence of several multinational product formulators. These companies have fully integrated operations across the value chain, which ensures consistent product delivery at stable price points. The majority of the key industry participants involved in the manufacturing of the product are observed to have long-term engagements with regional level automotive and industrial sector companies to establish sustainable businesses in the regional ecosystem and increase their market share. However, due to high plant setup costs and the presence of international formulators globally, the market penetration of new players is likely to below. Some of the prominent players in the base oil market include:

This report forecasts revenue growth at global, regional, and country levels and provides an analysis of the latest industry trends in each of the sub-segments from 2016 to 2027. For the purpose of this study, Grand View Research has segmented the global base oil market report on the basis of product, application, and region:

How big is the global base oil market?

What is the global base oil market growth?

Which segment accounted for the largest global base oil market share?

b. Asia Pacific dominated the base oil market with a share of 51.6% in 2019. This is attributable to the development of the automotive industry along with the resultant demand for finished lubricants to improve the operational efficiency of the vehicle imparting longer life.

Who are the key players in global base oil market?

What are the factors driving the global base oil market?

b. Key factors that are driving the market growth include increasing utilization of lubricants in end-use industries such as industrial & automotive and growing adoption of group II & III base oils.