The global BBQ seasoning market size was valued at USD 13.38 billion in 2021 and is expected to expand at a compound annual growth rate (CAGR) of 4.6% from 2022 to 2030. The growth is primarily driven by the rising demand for BBQ seasoning as a flavoring sauce, increasing usage of BBQ sauces and rubs in residential and food service, and growing product launches with ethnic tastes. Additionally, increasing interest in ethnic tastes and consumer inclination towards experimenting with new flavors has caused a proliferation of diverse product portfolios increasing the sales of barbecue sauces and seasonings. 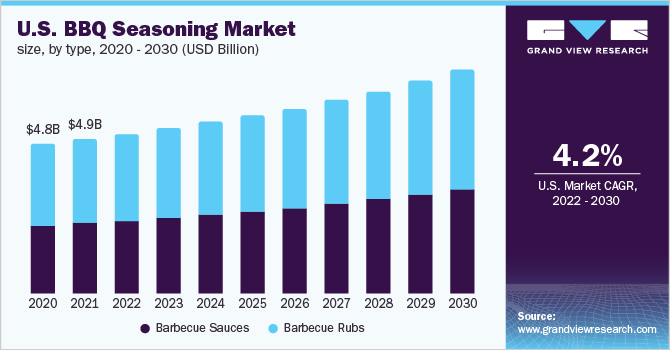 An increase in the demand for processed food and convenience products, a rise in the preference for natural ingredients, and mandatory actions on green labels are some of the major trends influencing the global industry.

The COVID-19 pandemic impacted almost every sector of the global economy resulting in mass production shutdowns, supply chain disruptions, and trade issues. The worldwide lockdown has also influenced farming practices, which has had a significant impact on the availability of spices and herbs required to manufacture BBQ seasonings.

As a result of the pandemic, outdoor hotels and BBQ eateries were forced to close, which reduced demand for BBQ spices from the hotel business. However, home cooking elevated the demand for BBQ sauces and seasonings in the post-Covid-19 scenario.

According to a research study published by Hearth, Patio & Barbecue Association (HPBA) in 2020, the consumption of BBQ food showed a noticeable spike in residential settings during the spread of COVID-19 due to prolonged homestays.

The demand for home-based barbecue preparations is being fueled by a growing home cooking culture during the lockdown, customer preferences for international cuisines, and an understanding of the health advantages of eating grilled food. This is expected to boost the demand in the post-pandemic environment.

Rising consumer preference for outdoor cooking and recreational activities is one of the major trends reshaping the global industry. To cater to the rising demand from consumers, BBQ seasoning manufacturers are now offering distinct flavors with an option to customize the taste.

BBQ rubs and sauces with eye-catching packaging and different flavors are likely to attract more customers. With ethnic foods becoming more mainstream and accessible, consumers across the globe are developing an interest in new and exciting spices and seasonings.

The rising multicultural population coupled with consumer demand to try out exotic dishes and flavors is further bolstering the international demand for international cuisines. However, the decline in meat consumption coupled with the growing trend of veganism is hampering the sale of BBQ seasonings and spices across the globe.

Over the years, the global industry has changed, and evolving lifestyles and increasing urbanization has augmented the growth. Rapid economic development, rising disposable incomes, and urbanization are causing changes in consumer eating habits across the globe.

The expansion of supermarkets and hypermarkets in urban areas would probably improve the availability of spices, which is anticipated to raise demand for spices and seasonings. According to a study published by the CBI Ministry of Foreign Affairs, demand for herbs and spices in Europe is forecasted to increase at an average rate of 0% to 3% per year in the coming years. This is further expected to create business opportunities for market players and drive the industry’s growth.

The barbecue rubs captured the largest revenue share of around 55% in 2021. The growth is driven on account of increased consumption of BBQ rubs for marinating and increasing preferences for the consumption of organic food. Additionally, companies are offering different BBQ rubs to meet ever-evolving consumer tastes and preferences.

For instance, in March 2022, RAPS, a Germany-based company launched a range of BBQ rubs that can be easily sprinkled over cuisines and continental dishes to enhance the taste.

A growing food service sector will support market expansion since restaurants, chefs, and caterers are the main users of spices due to their aromatic and sensory qualities. The rising consumer awareness about the potential medical advantages of the product is anticipated to further fuel the growth.

The sauce segment is expected to expand at the fastest CAGR of 5.0% from 2022 to 2030. The growth is further bolstered by a growing trend toward the consumption of smoked meals due to their improved taste and health advantages.

In addition, the Rising consumption of Western foods and cuisines in Asia is boosting market development possibilities over the forecast period. Customers are continually looking for products with distinctive flavors to add to a side dish with their main courses, such as barbecue sauces.

The foodservice segment captured the largest revenue share of over 60% in 2021. The growth is mainly driven by the rising consumption of BBQ seasonings and sauces in restaurants, rooftops, and BBQ special food trucks, among others. According to Datassential, 40% of all pork dishes mention barbecue sauces in their making ingredients.

The rising culture of BBQ parties is expected to have an ever-lasting impact on the global market. The increase in flavors show that barbecue, a highly traditional dish, is presently going through a creative period across all food service categories, with chefs and restaurants blurring regionalist borders, foreign influence playing a bigger role, and innovation combining with tradition. 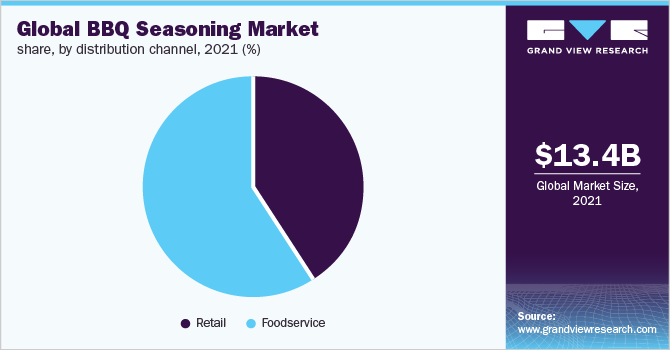 The retail segment is expected to expand at a CAGR of 4.1% over the forecast period. The growth of the segment is primarily driven by rising usage of BBQ seasoning in home cooking, the growing trend of house parties and summer cookouts, and consumer inclination toward experimenting with new cuisines and recipes. During COVID-19, amid the monotony of consumers’ prolonged stays at home, consumers looked at often cooking as a leisure activity, exploring new recipes to make snacking and mealtime occasions more exciting.

Some habits cultivated during COVID-19 are expected to stick long after the pandemic is subdued. Therefore, a sizeable portion of consumers is poised to continue to prefer home-cooked snacks and meals over out-of-home offerings in the coming years making a constructive addition to the demand for BBQ seasonings for the residential segment. The retail segment is further segmented into supermarkets/hypermarkets, convenience stores, e-commerce/online, and others. The supermarkets/hypermarkets segment dominated the global market with a share of around 55% in 2021.

According to a report published by Access to Nutrition Initiative, consumers in the U.K. spend over 80% of their budget on food that could be eaten at home at supermarkets. This data shows that the consumer inclination towards supermarkets as a shopping channel has increased over the years and is expected to showcase promising growth in the coming years.

The online distribution channel is anticipated to expand at a CAGR of 5.1% from 2022 to 2030. Several enterprises that manufacture and process spices offer their goods online or under the name of private labels after extracting their products from imported or domestically grown herbs and spices. Furthermore, online distribution channels witnessed a strong proliferation at the onset of the COVID-19 pandemic since consumers had to face stay-at-home limitations.

According to the statistics published by United Nations Conference on Trade and Development, the COVID-19 pandemic has sped up the transition to an online economy, creating a more digital world, and has changed how people shop for food and other necessities online, changes that are likely to have long-lasting effects. Additionally, benefits such as convenience, easy price comparisons, more variety, and safe online payments have further contributed to the growth of the segment.

North America captured around 45% of the revenue share in 2021. The rising popularity of grilled food and increasing consumption of meat among Millennials in Canada and the United States is positively favoring the growth. According to the data published by CNN, 80 million Americans barbecued in 2019, the most popular time being on Labor Day. The considerable growth in the U.S. and Canada can be attributed to the consumer's willingness to try the new seasonings and flavors to enhance the BBQ taste showcasing a profound interest in ethnic tastes.

The Asia Pacific, followed by Europe is expected to emerge as the fastest growing segment from 2022 to 2030. The growth of the regional market is driven on account of rising disposable income, a rise in the promotional and marketing activities by key market players, and growing awareness of the medicinal properties of spices and seasonings. 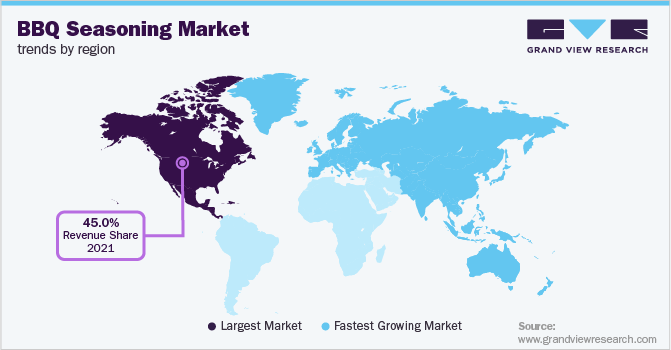 Asia Pacific's young population and quickly expanding fast food sector have increased the consumption of packaged, frozen, and convenience foods, which is anticipated to further boost the global market. Consumer food tastes have changed as a result of market globalization and the migration phenomena, providing new chances for foodservice establishments to add a range of spices and seasonings to their menus.

Some prominent players in the global BBQ seasoning market include:

This report forecasts growth at global, regional, and country levels and provides an analysis of the latest industry trends in each of the sub-segment from 2017 to 2030. For this study, Grand View Research has segmented the global BBQ seasoning market report based on type, distribution channel, and region: 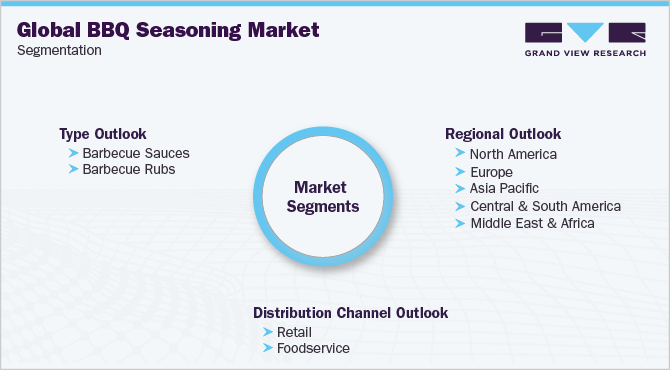 How big is the BBQ seasoning market?

What is the BBQ seasoning market growth?

Which segment accounted for the largest BBQ seasoning market share?

b. Barbecue Rubs dominated the BBQ seasoning market with a share of 55.1% in 2021. This is attributable to increased consumption of BBQ rubs for marinating and increasing preferences for the consumption of organic food, companies are offering different BBQ rubs to meet ever-evolving consumer tastes and preferences.

Who are the key players in the BBQ seasoning market?

What are the factors driving the BBQ seasoning market?

b. Key factors that are driving the BBQ seasoning market growth include increasing rising demand for BBQ seasoning as a flavoring sauce, increasing usage of BBQ sauces and rubs in residential and food service, and growing product launches with ethnic tastes.